“The Bronze Bomber” preps for future victory in the heavyweight division. 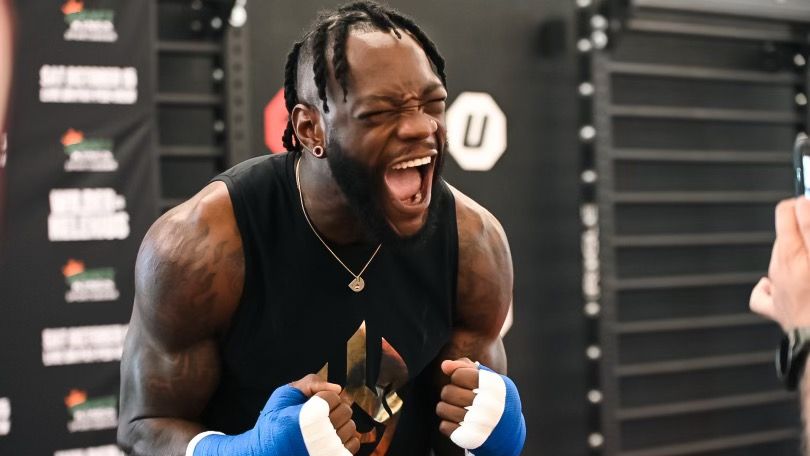 Former WBC heavyweight champion Deontay Wilder will pursue his fifth knockout in as many appearances at Barclays Center in Brooklyn, New York, in Saturday's non-title bout against Robert Helenius. Wilder ends his ring absence  since being dethroned by Tyson Fury in February 2020 and October 2021. (Toby Acuna/Premier Boxing Champions)

Deontay Wilder wants to give himself an early birthday present — winning his fight against former sparring partner Robert Helenius on Saturday night.

“Knowing Robert for a long time and as a former sparring partner and also knowing myself, we both fight with our hearts. So I’m looking forward to a tremendous fight while it lasts — and that won’t be long.”

The 6-foot-7 Wilder (42-2-1, 41 KOs) will end a year and six days of inactivity against 6-foot-6 &half; Helenius (31-3, 20 KOs), whose three-fight KO streak includes consecutive fourth- and sixth-round stoppages of previously unbeaten contender Adam Kownacki in March 2020 and October 2021.

“I’m finally back in Brooklyn, and it feels good,” said Helenius, 38, whose initial victory over Kownacki occurred at Barclays Center. “I’ve had a great training camp, and I’m ready for this fight. I’m doing everything in my power to be my best self on fight night.”

Beyond Helenius, Wilder focus is Usyk (20-0, 13 KOs), a 35-year-old Ukranian southpaw who dominated and dethroned IBF/WBA/WBO champion Anthony Joshua in September 2021 before winning a return bout by split-decision in August.

Usyk joined the Klitschko brothers, Wladimir and Vitali, as the third Ukrainian heavyweight title winner. He has vowed to be ringside on Saturday.

“I would love the opportunity to fight one of the best heavyweights in the world in Oleksandr Usyk, and after I get Robert out the way, then I hope there is an opportunity for Deontay Wilder and Oleksandr Usyk to happen because that would be amazing,” said Wilder.

“It’s great to know that Usyk will be in the arena, but I’m not looking past Robert. For Usyk to bless me with a title shot when I’ve blessed so many during my reign, that’s a great motivation to get past Oct. 15. If Usyk is truthful about being there, and if I’m dealing with a title shot, I’m going to jump on that opportunity.”

Wilder shares common opponents with Helenius in Johann Duhaupas and Gerald Washington, having vanquished each by 11th-round TKO September 2015 and one-knockdown, fifth-round TKO in February 2017.

Conversely, Helenius lost to Duhaupas by sixth-round stoppage in April 2016 and to Washington by eighth-round knockout in July 2019.

But Wilder’s trainer Malik Scott is wary of Helenius, a native of Sweden.

“Deontay has sparred with Robert Helenius. I was there. I saw how well Deontay did with him. Helenius doesn’t spar very well. From a coaching standpoint, Helenius is a good, big, dangerous fighter who comes alive when the lights are on. It’s time to throw a monkey wrench into the apple cart and to upset people,” said Scott, a former fighter whom Wilder stopped in 96 seconds in March 2014.

“But Deontay is going to pass this test with flying colors. After that, my opinion of his next opponent is that it should be Oleksandr Usyk or Anthony Joshua. I truly believe that Deontay is the only heavyweight in the world who can beat Oleksandr Usyk,” said Scott.

Wilder’s clash will happen Oct. 22, a week prior to his 37th birthday. It marks the first time in 14 fights and nearly eight years that a title will not be on the line for the 2008 Olympic bronze medalist. And the second straight time “The Bronze Bomber” will be fighting without a championship belt around his waist.

“The Bronze Bomber” had recorded seven straight knockouts before going 0-2-1 in his past three fights with the 6-foot-9 Tyson Fury, twice being knocked out and dethroned as WBC champion.

Fury was twice floored by Wilder during their draw in December 2018 before winning by seventh- and 11th-round stoppages in February 2020 and October 2021.

“The only way you fail is if you give up. I want to continue to motivate and to inspire, proving that even if you fall, you can get back up. I’ve always said that my No. 1 goal was to be the undisputed heavyweight champion of the world, so the only thing left is obtaining the rest of the belts,” Wilder said.

Wilder became “locked in” on a return to the ring on Memorial Day May 25, when the Tuscaloosa, Alabama, native was honored with a 7-foot bronze statue unveiled during a ceremony before hundreds of fans outside the Tuscaloosa Tourism and Sports building.

The irony hasn’t escaped him.

“I’m a Black man living in the heart of Dixie, and my likeness is immortalized and positioned in a place right down the street from where they used to sell slaves. There are some Confederate statues being taken down nearby. But there are still certain areas where historical memorials are standing as representations of racism from the times of slavery and segregation,” Wilder said.

“For all the sacrifices I’ve made and the time I’ve put into my career and into the community, what a miracle for a Black man who is still alive, young, handsome, wealthy and happy to be recognized in public by the local citizens. I locked in on my decision to come back to the ring the moment I saw that statue’s unveiling. I’m continuing to make history.”

Wilder later informed his children of his decision — five girls and three boys between the ages of 4 and 17.

“My children are all excited to see their Daddy returning to the ring. I had to apologize to them that this would encroach on some of their time with me because of the dedication it takes for me to travel and to train in order to compete at the top level,” Wilder said.

“But except for my oldest, Naieya, most of them were born into watching their Daddy in boxing. So they understand the concept behind it, especially having to share their time with me with the world. They’re always looking forward to me fighting, and they always want to be there.”

Wilder dethroned Bermane Stiverne as WBC champion by unanimous decision on Jan. 17, 2015, at the MGM Grand Garden Arena — on the 73rd birthday of the late Muhammad Ali. He became America’s first heavyweight titleholder since Shannon Briggs in 2007.

“The Bronze Bomber” is 4-0 with as many knockouts at Barclays Center, totaling nine knockdowns in stoppage victories comprising those over  Artur Spilka, Stiverne, Luis Ortiz and Dominic Breazeale.

“Barclays Center holds something special in my heart. It’s a second home to me,” said Wilder of his third, sixth, seventh and ninth defenses. “My most electrifying knockouts and exciting memories have been there. It feels good to be able to go back and add more memories.”

Wilder flattened Spilka in the ninth and final round in January 2016 and scored three knockdowns during a sensational first-round stoppage of Stiverne in their November 2017 return bout.

Wilder secured a three-knockdown, 10th-round KO of Ortiz in March 2018 and a one-knockdown, first-round stoppage of Breazeale in May 2019.

“Barclays Center has some of the best fans around. Every time I’ve been there, I’ve had an open-armed welcome,” Wilder said. “I’m coming back to Brooklyn! And it’s going to be bam-bam and goodnight, baby. I don’t get paid for overtime, so when I’m in that arena, you don’t know what’s going to happen.”