Why This Jewelry Designer Makes Pieces Using Her Own Bacteria

She was amazed at the microscopic world and thought the bacteria she could see was beautiful. 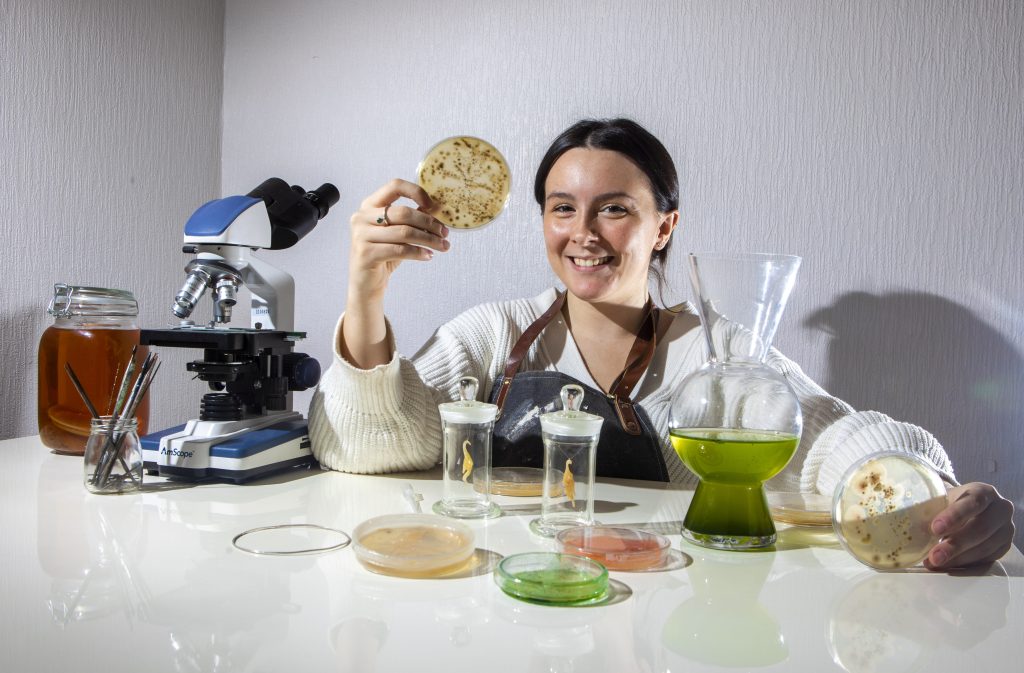 Chloe Fitzpatrick who creates jewelry from her own bacteria. (Katielee Arrowsmith via SWNS)

Meet the jewelry designer who makes amazing creations using her own bacteria.

Chloe Fitzpatrick, 22, takes samples from her own skin to grow the bacteria and develop into colors that can be used to dye jewelry.

Despite being stereotypically gross, Chloe is trying to show the beauty in bacteria – and said she didn’t want to make traditional jewelry from silver.

Her zany creations have helped her rack up 106,000 followers on TikTok where she documents the design process.

Chloe, from Bo’ness, Falkirk, Scotland, has taken samples from her hands, feet, face, and even her armpits and said they all produce different colors.

She has also used swabs from her pet Chihuahuas and plants.

“Bacteria is a natural part of life and using it to make jewelry is really exciting – I didn’t want to use things like silver,” said visual artist Chloe.

“I want to push the boundaries of what art is.”

“Samples from my hands and feet were yellow, with some orange, and ones from around my stomach were pink.”

“The bacteria from my face and armpits didn’t have any color which was interesting.”

Chloe swabs parts of her body and transfers the samples to petri dishes with a special growth medium inside called agar.

The bacteria samples are covered and allowed to multiply into colored colonies for about a week at room temperature.

She then isolates particular colors in a new dish, so they can multiply further before being used to create the jewelry.

“The reaction to the jewelry is split 50/50 – I always expected some people to think it was gross and was ready for some negative reaction,” Chloe said.

“But I want to show the beauty in bacteria because it has so many negative connotations.”

“I think it’s similar to people wearing jewelry made of ashes or breast milk.”

Chloe said she got the idea while studying at Duncan of Jordanstone College in Dundee where she took a science class.

She was amazed at the microscopic world and thought the bacteria she could see was beautiful.

Chloe said she has been inspired by the BioArt movement and plans to make jewelry to sell, but said further safety tests need to be carried out first.

She hopes people will send her skin samples, which she would take and grow bacteria to turn into jewelry and is also interested in doing exhibitions.

“People were very interested in seeing the process of me swabbing and were keen to follow along,” Chloe said.

“Some people have commented on videos saying they could send sample of their child or their dog and I could make jewelry from the bacteria.”

“I am planning to make some jewelry to sell – the rings I make are more statement pieces, but I would like to do some more commercial stuff.”

“I am hoping I can get people to send me samples of their hands for example, and I will grow their bacteria into their color and make a piece of jewelry for them.”

“There is this microscopic world no one can see that has so much beauty in it.”