Then And Now: Hurricane Michael Survivor Reflects On Harrowing Experience 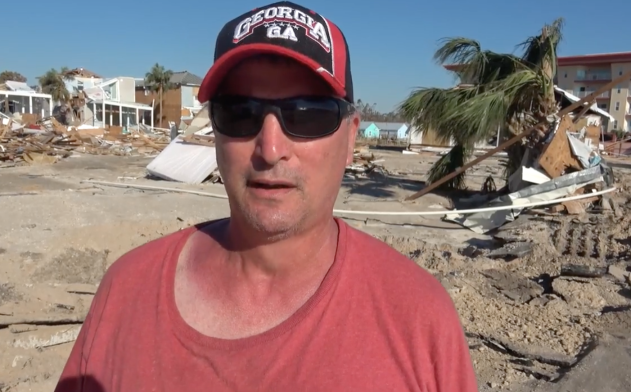 Hurricane Michael crashed ashore in the Florida Panhandle on Oct. 10, 2018, near Mexico Beach and Tyndall Air Force Base with Category 5 winds and towering storm surge. At landfall, the storm’s maximum sustained winds were found to have clocked in at 160 mph — easily surpassing the Category 5 threshold of 157 mph and earning Michael the title of the strongest hurricane on record to make landfall in the Florida Panhandle. Storm surge reached 9 to 14 feet at Mexico Beach to Indian Pass, according to the National Weather Service.

Before the hurricane was reanalyzed, however, the National Weather Service had classified Michael as a strong Category 4 hurricane with maximum sustained winds of 155 mph — 2 mph short of Category 5 strength and the same intensity Ian had maintained up until it approached the Florida coast.

Summers had decided to weather Hurricane Michael at his parents’ house in Mexico Beach with his cat, named Mr. Red, and Frank, an 80-year-old man with two dogs who his parents had sent to shelter with him.

It had only been about half an hour into the storm when the water breached the house and began to lap at Summers’ feet.

“He’s holding his dogs; I’m holding my cat, and the water starts rising,” Summers told Brandon Clement in 2018. “And it gets all the way up to my neck, and I realize that we can’t stay in there.”

“We have to get to the roof to survive this storm,” he recalled telling Frank.

But they never made it to the roof.

After stepping outside and onto the patio, the walkway collapsed beneath Summers, and he and his cat plunged into the floodwaters below.

“I didn’t want my cat to die,” Summers told Clement, recalling his thoughts in that moment. “I didn’t want to die … but I was able to remain calm, and that’s what saved me. I don’t know how, but I was. There was somebody there that grabbed me and pull me out of that water, so I’m here to tell my story.”

Sopping wet, dodging debris and clinging to their terrified pets, the two men were able to make it to the outdoor bathroom. Summers pulled in a bench that had been floating by, and the two men and their pets sheltered there throughout the remainder of the storm.

“We were able to stand on the bench as the water’s rising, and I sit there, and I hold the door for three hours until the storm subsides,” Summers said.

Four years later, he told Clement in an interview that the damage from Hurricane Ian had looked just as intense as what he saw in old footage from Michael, albeit the latter may have brought more wind and tornado damage and Ian more flood damage. If Ian had continued a track for the panhandle, Summers said he would have left town rather than trying his luck a second time.

Rebuilding was slow, but Summers stayed at Mexico Beach to help with distributing food. The restaurant where he had worked as a manager, Killer Seafood, had been completely swept away by the storm surge, and all that remained of the townhomes across the street were strewn out on the restaurant’s property.

Summers and Michael Scoggins, the owner of Killer Seafood, teamed up with chefs Dave Snyder and Francisco Jimenez to prepare hot meals and drinks for residents, first responders and cleanup crews in the days following the storm at Camp Happy Tummies, a food distribution center that had been established by the former two chefs.

“The first year was really tough because all you saw was destruction. You didn’t really see the rebuilding happening at the time,” Summers said. Then, businesses slowly started to reopen year after year. A bank, a gas station, one right after the other. And at the start of 2019, Scoggins reopened Killer Seafood out of a food trailer. The absence of greenery from palm to pine trees, however, still serves as a reminder of the powerful hurricane.

“It creates a desert-scape that really wasn’t here for the 16 years I lived here, so now it’s a little tough to get used to,” Scoggins said, adding that while new trees had been planted, it would take some time before they could fill in for the 50- to 100-year-old trees that had once populated the landscape.

While there has been progress, Snyder told Clement that Mexico Beach hasn’t quite hit the finish line. For that, the hotels in town would have to reopen for any visitors to the area.

“It opens up the opportunity for more people to come and enjoy our town,” Snyder said. “So every one of those [hotels] that comes back online gets us closer to that ‘Is Mexico Beach back?'”