After 12 seasons in the NFL, Early has transitioned into stunt double, screenwriter and producer. 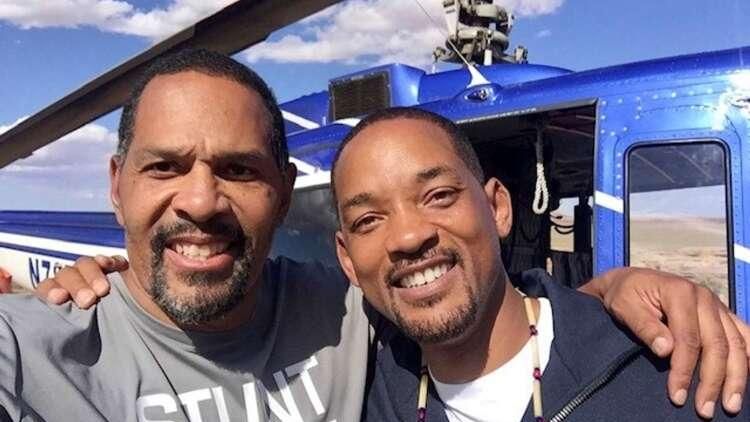 As if being a 12-year wide receiver in the NFL in the late ’80s through the late ’90s wasn’t dangerous enough, Quinn Early turned to Hollywood after his playing days and became a successful stunt double for stars such as Will Smith and Shemar Moore.

Most noticeably, he doubled for Smith in his Oscar-winning turn in “King Richard.” Early now wants to secure a role behind the scenes as a writer and producer. He recently sold his first screenplay. In addition to his film work, he also coaches high school football at Cathedral Catholic in San Diego.

The athlete-turned-stunt man talks to Zenger about his transition from pro sports.

Zenger: Before all the rule changes, playing wide receiver in the NFL resembled a stunt double in a lot of ways. How did you make the transition?

Early: Totally random. One of my best friends from college, a gentleman named Bill Perkins who was a teammate, became a hedge-fund manager on Wall Street. His passion was movie-making. He became a producer. He called me one weekend in 2010 and asked me to be in his movie.

Next thing I know, I’m hanging out the back of a truck with a machine gun, and they paid me for it. And I thought: “Are you serious? I can make money doing this for a living?” I became friends with the stunt coordinator, and he mentored me. I started hustling and here I am, 12 to 13 years later, having some success with it. It’s been a lot of fun.

Zenger: Is the mental makeup for stunt work the same as preparing your body for football?

Early: It’s not even close. With football, especially during the time I played, you didn’t know where the hits were coming from. You went out there and took your life in your hands. In the stunt world, it is challenging, but there’s a lot of preparation, a lot of safety mechanisms in place. So, when I’m actually doing a stunt, I’ve prepared for it. We stay as safe as possible.

Some stunts can be life and death, but you follow the protocols, you do what you’re supposed to do, and always respect the stunt. It can be as easy as just falling to the ground. So, in that way it’s different, but football is definitely harder.

Zenger: Did your NFL career prepare you for the type of work you’re doing now?

Early: Absolutely! Through my experience, the NFL prepares you for whatever is next in your life. The reason I say that is, there’s a lot of adversity. There are times when you don’t play that great, or the team isn’t doing as well, or sometimes you feel you’re treated unfairly.

The thing with football, where there is so much big money involved. Say I’m the starting wide receiver making a million dollars. The receiver that’s right behind you, let’s say he’s making $200,000. He can do what I can do, why keep me around? That’s just economics. The thing about playing football is, you have to play well every day, week after week, season after season.

Zenger: How do you feel about the new NFL rules that cater to the offense and scoring points?

Early: They have made it easier for players to have longevity. I look at the quarterback position. You look at a Tom Brady. He’s in his 20-plus season; he’s in his 40s. That was unheard of back in my day, because they weren’t protecting the quarterbacks the way they are now. The rules changed because of what we know now about concussions. Also, the money is so big now, they’re trying to do everything they can to keep guys healthy. I could’ve probably played another four or five years if we had the rules they have now.

Zenger: When did you know it was time to retire from football?

Early: After my 11th season, I was playing with the Buffalo Bills. When I signed that contract coming from New Orleans, I was already an older player. I think I was 29 or 30 at the time. You know how it is in the NFL. It’s like dog years. Once you turn 30, you might as well be 60. What’s funny is, my last year, I was playing for the Jets.

I was in the locker room and three or four guys came over asked me how old I was. “35.” And they were just like: “Oh my God. I can’t believe it.” The fire was kind of out when I signed with the Jets. I signed a four-year deal with the Bills. Back to the economics, I knew I would only get about three years out of that deal, and that’s exactly what happened.

What was upsetting to me: Instead of saying, our first-round draft pick is Eric Moulds, who is a great guy by the way. It was his time to play. Instead of saying that, they said: I wasn’t the player I used to be. It’s those kinds of things. I played football from the time I was seven until I was 35.

Physically, I could’ve kept playing, but mentally I was done. When that fire goes out, that’s when people get hurt. You’re just out there playing for a paycheck and not for the love of the game.

Zenger: How long after retirement did you get into acting?

Early: I did some things when I was done playing. I worked for a sports nutritional company for a little while. I was working with kids, teaching them how to run properly, speed training for their sport. I was enjoying life. I went about 10 years before I started doing the stunt thing.

Zenger: You have authored a book, you have a career as a stunt actor, have these things fulfilled you like football?

Early: They have. What I’m doing now is more writing and producing. When I finished my mom’s book, “Bryant Acres,” I wrote a screenplay based on the book. I didn’t realize how much I loved writing. Since then, I’ve written about seven screenplays.

My first screenplay has been greenlit, so it’s going to be a movie soon. I’m really excited about that. I did a short film, which my son directed, he’s also a stuntman. That was a good experience. I’m trying to transition from doing stunts into more writing and producing.

Truth be told, I’m not the youngest guy anymore and getting thrown through a plate glass window doesn’t feel as comfortable as it once did. I’ll probably do it a couple more years, but the writing and producing is what I have a passion for.

Zenger: Your son went through a rough period growing up. To see his growth and him follow in your footsteps to a degree, how special is that?

Early: During his teenage years, he struggled. It was touch and go for a little while. He got into a bit of trouble. His mother and I just tough loved it. I would always let him know that I believed in him and that he can be great. We stuck with him, and now he’s one of the best men I know. He started being a stunt coordinator and site coordinator, and he hires me for stuff.

He called one time and said, “Dad, are you available on Tuesday?” I said, “Are you hiring me right now?” He said, “Yes, I am.” I called his mom and told her what happened, and she just started crying. It’s great watching him blossom.

Zenger: You have stunt-doubled for Will Smith. What was that like?

Early: It was great. He is a real good guy. Funny on set, as you could imagine.

Zenger: What can we expect in the near future from you?

Early: Look for my screenplay, “The Angel of Harlem.” It’s a Christmas film. Hopefully, it will be out sooner than later. It’s in development right now. I’m excited about that. I’ve written a couple of other projects that I’m trying to get made.

One thing I’m really proud of is a documentary series I do called “This Is One.” It highlights the accomplishments of Black American sports heroes whose stories have yet to be told. The first one I did is called “The Shoulders of Giants.”

It’s about Frank Kinney Holbrook, who was the first Black student athlete to go to the University of Iowa back in 1895. Found him by accident, did a documentary about him, because of it, he was inducted into the Iowa Athletic Hall of Fame last year. I was excited about that. Fans can watch the video at www.frankkinneyholbrook.com. The proceeds go to Alzheimer’s research.