Julia completed its rare crossover from the Atlantic to the Pacific, one day after making landfall as a Category 1 hurricane. 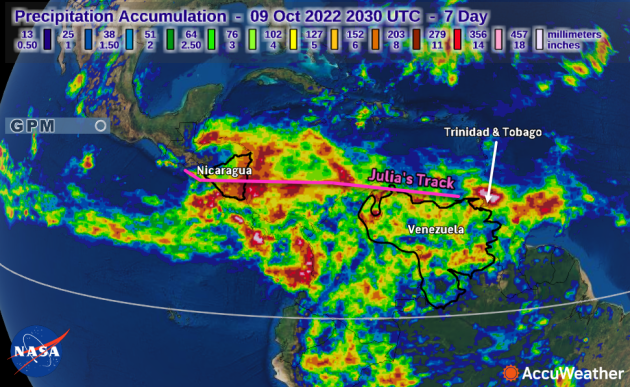 Julia completed its rare crossover from the Atlantic Ocean to the Pacific Ocean on Monday, one day after making landfall as a Category 1 hurricane in Nicaragua, unleashing torrential, flooding downpours in the process and leaving hundreds of thousands without power.

Julia made landfall near Pearl Lagoon, Nicaragua, at 3:15 a.m. EDT Sunday, with maximum sustained winds of 85 miles per hour. Julia lost wind intensity while over the rugged terrain of Nicaragua and was downgraded to a tropical storm by the National Hurricane Center late on Sunday morning. It was downgraded into a tropical depression near the coasts of El Salvador and Guatemala on Monday morning, and Julia will lose more wind intensity, becoming a tropical rainstorm, as it tracks northwestward near the Pacific coast of Central America over the next couple of days.

The risk of flooding downpours and mudslides will persist from El Salvador and parts of Honduras to portions of Guatemala, Belize and southern Mexico through Tuesday, AccuWeather forecasters say.

A “state of calamity” was declared by the Guatemala’s president Alejandro Giammattei on Monday. This declaration, which will be in effect for 30 days, allows for urgent measures to safeguard the lives of Guatemalans as Julia brings heavy rain and gusty winds to the country.

Nicaragua’s Vice President Rosario Murillo told TN8 televisions that there were no reports of deaths so far, The Associated Press reported. However, four deaths were reported elsewhere in Central America, including two in El Salvador and two in Honduras, AFP reported. Two of the victims in El Salvador died after a house collapsed in the town of Guatajiagua, AFP said, while the victims in Honduras drowned after the storm capsized their boat near the town of Brus Laguna.

Nearly 1 million residents along Nicaragua’s coastal region lost power and internet, Reuters reported. Some of the outages were from fallen lines while the majority came from a government decision to cut the electricity for safety reasons.

Total rainfall estimates from when Julia originated in early October to Sunday from NASA Global Precipitation Measurement shows rainfall amounts in excess of 11 inches across Nicaragua and other areas of Central America. According to the AP, highways were closed due to the heavy rains reported in Honduras, Panama and Costa Rica.

Nearly 60 miles to the west, in Managua, Nicaragua, a home collapsed as it was surrounded by flooding water, displacing the family who lived in it.

According to Reuters, 13,000 families in Nicaragua were evacuated, and more than 800 houses were flooded.

In Venezuela, several people were reported missing on the north side of Las Tejerías in the El Béisbol and La Agotada neighborhoods after dozens of homes were damaged by a landslide, according to Major Gen. Carlos Pérez Ampuedatom, the vice minister for risk management and civil protection. Five streams overflowed, resulting in the disaster.

At the time of the landslide in Venezuela, Julia was only a tropical depression. According to Venezuelan Vice President Delcy Rodríguez, the landslide was fueled by multiple days of heavy rainfall, CNN reported.

“There was a large landslide in the central area of Las Tejerías. We have already found 22 dead people; there are more than 52 missing,” Vice President Delcy Rodríguez told Venezolana de Televisión. According to a CNN report, the death toll has since been revised upward to 25.

Rodríguez said on Sunday people were still walled in and officials were trying to rescue survivors as crews performed search operations with trained dogs and drones. Floodwaters have affected 21 sectors in Las Tejerías, which is home to about 54,000. More than 20,000 officials were deployed to the affected regions.

Colombian President Gustavo Petro tweeted on Sunday that there was “minor damage” in the country. Petro also said that two people were injured, two homes were destroyed and 101 homes suffered damage.

Julia became a tropical storm in the Caribbean Sea, near the coast of Colombia, on Friday. It strengthened into a hurricane as it tracked westward on Saturday evening in the southwestern Caribbean before making landfall in Nicaragua less than 12 hours later.

It traveled westward across Nicaragua and the southern part of Honduras, which has fewer mountains compared to areas farther to the north and the south in Central America. As a result, the system remained a tropical storm and retained the name Julia near the Pacific coast of El Salvador on Monday morning.

Julia is now the 18th named tropical system in the East Pacific Ocean Basin this season and is only the second system on record to pass from the Atlantic basin to the Pacific basin with at least tropical storm in intensity. The other system to accomplish the impressive feat was Bonnie earlier this season.

“For the first time in recorded history, two tropical cyclones moved from the Atlantic to the East Pacific in the same season and maintained at least tropical storm strength,” AccuWeather Senior Weather Editor Jesse Ferrell said. “Two tropical storms also crossed over in 1996 and 1988 but did not strengthen beyond tropical depression status in the Pacific.”

After strengthening into a tropical storm in the Caribbean Sea, Bonnie made landfall at the Costa Rica-Nicaragua border then proceeded to reach the East Pacific Ocean and strengthen into a Category 3 hurricane in early July.

Bonnie’s journey across both basins made it one for the record books, journeying more than 6,600 miles and becoming one of only four systems ever to cross over and become a major hurricane.

AccuWeather meteorologists are monitoring post-landfall possibilities for Julia. A small piece of Julia’s energy will hover near the southwestern Gulf of Mexico for a period of time this week. While there is a remote chance this could briefly evolve into a new tropical depression or storm for the Atlantic basin, the much more likely scenario is for this disturbance to be shredded by stiff winds in the region. If this system were to become a named storm on the Atlantic side, it would be called Karl.

On the Pacific side, there is a slightly better chance of another system forming off the coast, outside of Julia’s old moisture and circulation. If this occurs and evolves into a tropical storm, it would be named Roslyn.

This time of the year, warm waters in the western Caribbean are a typical breeding ground for tropical systems in early October. Although this is not the case this week, the weather pattern during this time of year tends to favor tropical systems tracking northward to the Gulf Coast and occasionally along or just off the Eastern Seaboard.

AccuWeather meteorologists warn that residents in hurricane-prone areas should stay vigilant as the month of October continues, as October is responsible for some of the most notorious Atlantic hurricanes in history.

«Previous Post
Memorial For Loved Ones Lost To Ian Rises Amid Rubble And Despair»Next Post
Then And Now: Hurricane Michael Survivor Reflects On Harrowing Experience