Products like Wordtune aim to help humans be better versions of their writing and reading selves. 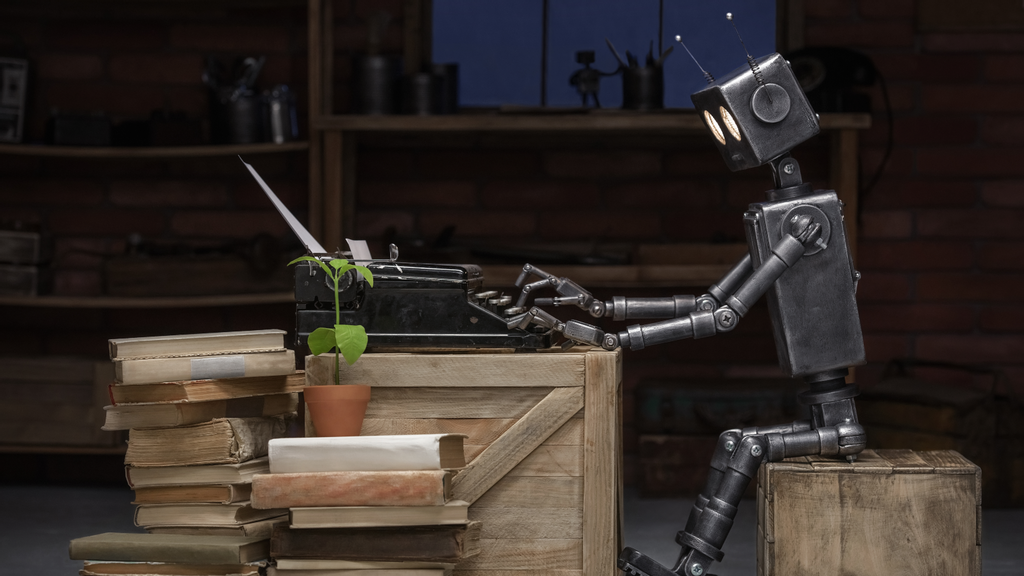 A robot can be seen using a typewriter. The advancement of AI-based writing products is creating paranoia among writers as they fear that a creation of such kind might sabotage their chances of employment. (Image by Vasilyev Alexandr via Shutterstock)

It’s a professional writer’s worst fear – artificial intelligence technology that can compose an article or a turn of phrase just as skillfully as a human can.

Israeli startup AI21 has that potential. So, with no small amount of trepidation, I had to ask Ori Goshen, the company’s CEO, if AI21’s flagship product, Wordtune, could put me out of a job.

“Absolutely not,” Goshen told me.

“Of course, these kinds of AI systems will become more and more capable, and automation in the writing process will become more and more sophisticated. But all the original ideas and thoughts – this is something where the human mind will have a dominant role in the creative process. Machines and systems will make the process more efficient, but we will be the ones driving the wheel.”

That said, Wordtune is a pretty impressive offering, far more than just a grammar checker. Goshen calls it “a thinking assistant which helps you consider other ways you could express your thoughts.”

Wordtune has a standalone version plus plug-ins for Google’s Chrome browser and Microsoft Word. It also works with Gmail, Twitter, Facebook, Slack, LinkedIn, WhatsApp and more. The product has been in the market for just under two years and has more than 3 million users.

You can do 10 basic rewrites a day for free; afterwards, pricing starts at $9.99 a month.

A second product, Wordtune Read, applies the same AI technology to summarize long or complicated texts. A page of academic or legal jargon is condensed to a paragraph with key points highlighted.

“It’s like Cliffs Notes on steroids,” Goshen says. “You can skim through a document and then focus only on the parts you really care about. The system can also customize the snippets it generates. So, if you have a long report but all you care about is the CEO, you can specify ‘CEO’ as a keyword.”

AI21 is putting the finishing touches on a translation module for Wordtune. It works in nine languages, including Mandarin and Hebrew, although output for now is only in English.

AI21 Labs has an impressive pedigree.

In addition to coco-founder and Stanford University professor emeritus Yoav Shoham, a third co-founder and active board member is Amnon Shashua,  CEO of Jerusalem-based Mobileye, which is building sophisticated self-driving car software for its parent company, Intel.

The Tel Aviv-based company, founded in 2017, currently employs 120 people and has raised $118 million – including a $64 million Series B round in July. AI21 Labs was named one of the top 100 most innovative AI startups of 2022 by CB Insights.

Big thanks to our friends over @GoogleCloud_IL for sending us this sweet surprise after our latest round of funding!
Here’s to a great partnership and many more celebratory treats to come! ???? pic.twitter.com/bRBZF08Yt0

The first head is a research lab working on fundamental basic research in NLP – natural language processing. The second head is products like Wordtune and Wordtune Read, and the third is a platform meant to “democratize the technology so others can build on top of it.”

To achieve the latter, the company has announced AI21 Studio, which allows software developers to embed AI21’s NLP tech into their own apps and products.

“Studio has a web-based API, so it’s very easy to use. Developers don’t need NLP expertise. Anyone can sign up for the platform and use it up until a certain volume before they have to put in a credit card.”

Among the customers are Latitude, which built a popular video game, AI Dungeon, using AI21’s tech; QAnswers, which generates FAQ content; and Tweet Hunter, which promises “to help you grow and monetize your Twitter audience.”

Which came first – the Studio or the apps?

“We needed the right strategy to let others understand the capabilities and limitations of the technology,” Goshen says. “So, we said, ‘Let’s build the applications first.’ We quickly realized It would be too limiting to only have our own applications, so we decided to open the tech up as a platform.”

AI21’s main NLP engine, “Jurassic,” competes directly with the well-funded GPT-3 system, unveiled in 2020 by OpenAI and backed by Tesla founder Elon Musk and Microsoft; the latter has pumped more than $1 billion into the company.

Jurassic has a vocabulary five times larger than GPT-3’s, including more than 250,000 “lexical items” (expressions, words and phrases) along with billions of statistical relationships between words. And unlike GPT-2, Jurassic’s hybrid system can refer a question to a third-party engine.

For example, GPT-3 can easily handle simple math like 1+2=3. “But if you ask it to add 1,000 and 1,001, it will spit out complete nonsense,” Goshen says. “That’s because language models don’t learn arithmetic. So, it doesn’t know how to answer.”

AI21 will forward a question like that to an outside scientific calculator – simple and accurate.

Another problem with GPT-3 is that it only knows the most recent information it was fed. Ask who the American president is, and it might tell you “Donald Trump” because most language models were trained before Joe Biden won the November 2020 election.

What would RBG say?

To demonstrate the power of the Jurassic platform, AI21 input the opinions and writings of the late US Supreme Court justice Ruth Bader Ginsburg – some 600,000 of RBG’s words in total – and then asked the artificial Ginsburg what it thought of the recent court rulings on abortion.

“Whether it’s good or bad, it’s settled, and, therefore, it’s not my business to think about it,” the RBG bot replied inconclusively.

What would RBG (probably) say about&mldr; anything? Check out our latest AI experiment at https://t.co/usxD4RccBM and let her judge! #AskRBG pic.twitter.com/qendjMC5b5

But as Goshen notes, that wasn’t the point. “We wanted to pay homage to a great thinker and leader with a fun digital experience. It’s important to remember that AI in general, and language models specifically, still have limitations. We’re not going to do this again with [living Supreme Court justice] Clarence Thomas.”

AI21’s RBG bot plays into the debate over whether AI has become sentient — that is, able to experience feelings and sensations – as former Google engineer Blake Lemoine and Know Labs CEO Philip Bosua have claimed.

Goshen does not agree.

“I understand why these language models are impressive,” he says. “They produce such natural results they may fool you into thinking it’s a living creature. But as someone who understands how this works behind the scenes, it’s definitely not even close.”

Good news for those of us fearing a sci-fi future featuring humanity-eradicating robots.

But will we hardworking writers be as mercifully spared?

«Previous Post
Camping Out, Blissing Out Under The Stars In The Galilee»Next Post
No-dig Underground 3D Mapping To Reveal Sinkhole Dangers