The Hunter’s Moon, The 1st Full Moon Of Fall, Will Rise This Weekend

Two weeks have passed since the official start of autumn, and one of the first astronomical events of the new season is about to take place over the weekend 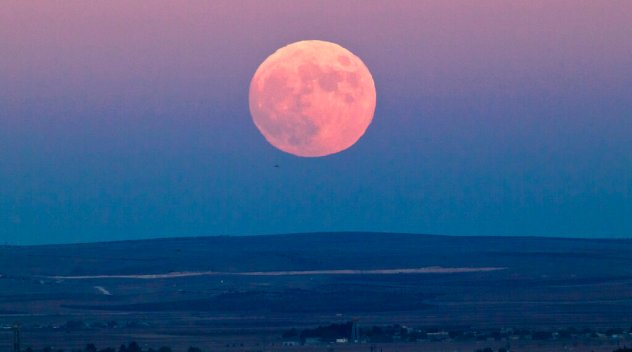 FILE: A full moon rises seen from a hilltop overlooking the Syrian city of Kobani, outside Suruc, on the Turkey-Syria border Thursday, Nov. 6, 2014. (AP Photo/Vadim Ghirda)

Two weeks have passed since the official start of autumn, and one of the first astronomical events of the new season is about to take place over the weekend.

As the sun sets on Sunday, the full Hunter’s Moon will rise in the eastern sky, glowing throughout the entirety of the cool fall night. The moonlight may be so bright that people who step outside may see their shadow, at least in areas where cloud-free conditions are in the forecast.

Every full moon has several nicknames, often relating to occurrences that take place throughout the month in which they rise, such as the weather or the types of plants in bloom. The Hunter’s Moon does not follow these traditional naming guidelines. Instead, it is forever hitched to the Harvest Moon, always following the full moon that rises closest to the equinox. This year, the Harvest Moon rose 12 days before the equinox, which took place on Sept. 22.

“Since the farmers had recently cleaned out their fields under the Harvest Moon, hunters could easily see the deer and other animals that had come out to root through the remaining scraps (as well as the foxes and wolves that had come out to prey on them),” the Old Farmer’s Almanac explained on its website.

With colder weather settling across North America in October, and perhaps even the first frost of the season for some areas, October’s full moon has a few other nicknames related to the weather, including the Freezing Moon and the Ice Moon.

Folks who step outside this weekend to look at the moon will not have to look far to also catch a glimpse of Jupiter and Saturn.

Jupiter is currently brighter than any star in the sky and will appear extremely close to the moon on Saturday night. Saturn will also be visible in the same region of the sky, appearing to the right of Jupiter about the distance of two outstretched hands held at arm’s length.

Weekend skywatchers should also be on the lookout for shooting stars associated with the peak of the Orionid meteor shower. The Orionids do not peak until the night of Oct. 20 into the early morning of Oct. 21, but some meteors associated with the event are already starting to streak across the night sky. Current hourly rates are less than five meteors per hour, but activity will gradually increase leading up to peak night later in the month.