Topsy-Turvy Temperatures On The Way For Northeast 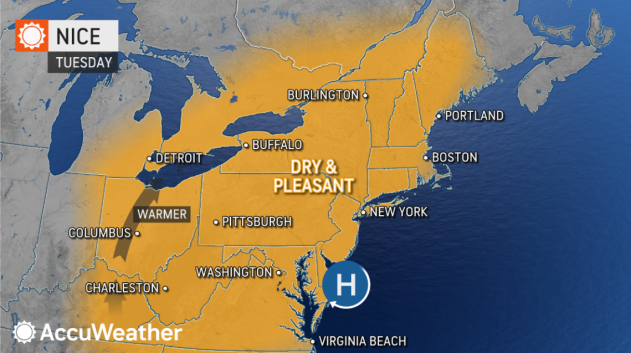 AccuWeather meteorologists say a volatile weather pattern could bring the risk of summery severe thunderstorms to wintertime snowflakes in just a few days’ time, as a potent cold front crashes through the region.

The weekend started off with the first of two cool spells for the region. Afternoon high temperatures on Saturday were 5-10 degrees Fahrenheit below normal for the beginning of October, with cities like Philadelphia and Washington, D.C., reaching only the lower 60s. Farther north, places like New York City, Syracuse, New York and Burlington, Vermont, spent the day in the 40s and 50s.

Anyone seeing #frost this morning? Did you need the ice scraper for the first time this year? With temps running 28-36 degrees this morning many of us are waking with the heat on. Highs rebound back around 60 in the mountains & near 70 out east later today. #vawx #ncwx #wvwx pic.twitter.com/ip0OvyTcS3

Sunday morning featured temperatures below freezing and widespread frost across portions of New England and into parts of New York, Pennsylvania, West Virginia, Kentucky, and Virginia, the first of the season for some more southerly locations.

As the week progresses, cooler-than-average conditions are likely to gradually wane, with temperatures nearing normal by Monday or Tuesday for most.

For cities like Pittsburgh, Detroit, and Buffalo New York, the peak of the mild conditions is expected on Tuesday and Wednesday, when afternoon temperatures will soar as high as 10 degrees above normal into the 70s.

The warmest day for the Eastern Seaboard will be on Wednesday, with high temperatures ranging from around 70 in Boston to the mid-70s in Richmond, Virginia. These temperatures are also set to be as much as 10 degrees above normal for the middle of the month and more akin to a typical day in the third week of September.

For most across the region, Wednesday afternoon would be a great time to spend outdoors, whether it be pumpkin picking, hiking, or leaf-peeping.

Lurking behind the mid-October warmth, however, will be yet another reminder that winter is not too far off.

AccuWeather meteorologists say that a potent cold front is expected to sweep across the eastern half of the United States this week, bringing with it some cold Canadian air.

“Temperatures are expected to crash as a surge of cold air follows a powerful cold front this week,” said AccuWeather Meteorologist Brandon Buckingham.

The wave of cold is set to first settle into the Upper Midwest by Wednesday before sweeping through the Great Lakes and Ohio Valley.

Temperature swings across the Ohio Valley and Northeast are likely to be drastic, with high temperatures falling as much as 15 degrees in just a couple days.

In a place like Cleveland, temperatures in the lower 70s on Tuesday and Wednesday are forecast to be replaced with a high only in the upper 50s on Friday. While the shot of cold air will be delayed farther east, a place like Hartford, Connecticut, can expect highs near 70 on Wednesday and Thursday to also fall to the 50s by Saturday. These temperatures late in the week will feel more like Halloween or early November.

Unlike with some frontal passages so far in October, there will be more moisture in the atmosphere as this front moves through, bringing more widespread rain and thunderstorms.

Farther north, the combination of the cold air and moisture is likely to bring a few snowflakes to portions of the Great Lakes. While the most widespread snow is likely across Minnesota, and Wisconsin, parts of Michigan, and New York, could also have some flakes.

From late Wednesday through Friday, rainfall amounts of 0.50-1.00 inch will be common from Illinois, and Michigan, to Massachusetts, and Maine. The front is likely to slow down for the end of the week, allowing some more localized rain totals of as much as 2-3 inches from eastern Pennsylvania, to New Hampshire.

The most widespread threat will be flash flooding. Outside of southern New England, much of the region has had sufficient rainfall to avoid drought in recent weeks, according to the U.S. Drought Monitor. However, the soggy ground may have trouble absorbing rainwater in any heavier downpour. Low-lying locations and areas with poor drainage will be the most susceptible to flooding.

“This cold front also has the potential to spark severe thunderstorms from the Midwest to the eastern United States Wednesday and Thursday,” warned Buckingham.

The clash of milder air ahead of the front and the cold air following behind will be a dramatic change that can make the atmosphere more unstable, thus threatening severe weather.

Gusty showers and thunderstorms may also accompany the front across the Northeast and mid-Atlantic as it pushes eastward on Thursday. Small hail in a few locations can also not be ruled out.

Travelers, especially those with high-profile vehicles, should be on the lookout for these wind gusts as they can make driving at high speeds difficult or even dangerous.

AccuWeather long-range meteorologists say that the cold air that comes late this week is likely to stick around into the weekend and that another cold front will bring a reinforcing push of winterlike air next week.