Salvaging What Is Left, Communities Come Together In The Wake Of Hurricane Ian

The deadliest tropical system to make landfall in more than 87 years, left a trail of destruction behind in southwest Florida. 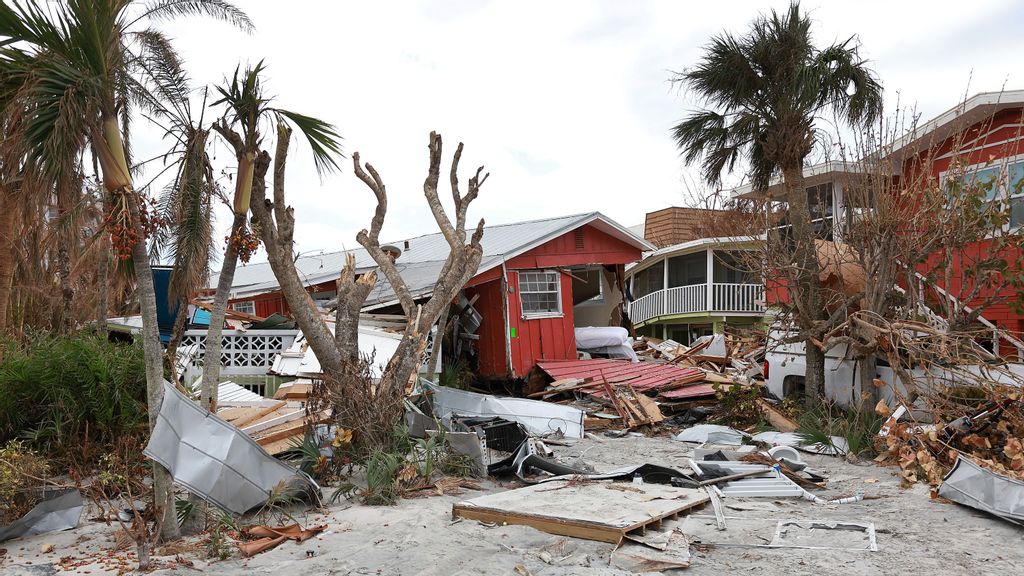 A destroyed building sits among debris after Hurricane Ian passed through the area on October 08, 2022 in Sanibel, Florida. Residents of the island are hopeful that the causeway onto the island will be repaired soon so they can start the process of rebuilding their homes after it was heavily damaged during the hurricane leaving the island cut off from the mainland. (Photo by Joe Raedle/Getty Images)

Hurricane Ian, the deadliest tropical system to make landfall in Florida in more than 87 years, left a trail of destruction behind in southwest Florida when it made landfall over a week ago. Now communities are coming together to salvage what is left of the storm-ravaged homes, as many still remain without power or clean water.

The number of storm-related deaths continued to rise on Thursday, with at least 131 confirmed fatalities blamed on Ian, CNN Newsroom reported. At least 126 of those deaths occurred in Florida, as well as five in North Carolina. The Associated Press also reported three fatalities in Cuba, where Ian struck before hitting the U.S.

Ian now ranks as the 24th deadliest hurricane in U.S. history, surpassing Hurricane Agnes, a historic storm that unleashed a biblical amount of rain and led to 122 fatalities in June of 1972.

Most of the deaths from the hurricane were a result of drowning, underlining that the storm surge was the deadliest part of Ian. Hurricane Ian unleashed more than 30 inches of rain on some towns and a ferocious storm surge to others. In Lee County, home to some of the hardest-hit areas, residents’ homes were quickly submerged in water.

In an effort to escape the floodwaters, people waited on top of roofs or in attics for rescue crews, while others used kayaks to evacuate. Water levels have slowly dropped in the days after Ian’s landfall, but now streets are filled with debris and people’s belongings, and homes across the state have been deemed unlivable.

In the River Park neighborhood in Naples, a historically black neighborhood, water levels were waist-deep during the height of the storm. Now that floodwaters have receded in River Park, residents tell AccuWeather National Reporter Jillian Angeline that they are grateful to be alive, but a long road of recovery stands ahead of them.

As people begin to pick up the pieces, neighbors are helping neighbors – and stories of heroics during the storm are also coming to light. Residents of River Park told Angeline that as people waded through floodwaters to safety, alligators were lurking in the waters. And one woman, nicknamed Shorty, stepped up as a hero to rescue her neighbors.

“It’s very heartbreaking to see the people suffering like they are down here,” Robert Reuland, a member of the American Red Cross, told Angeline. “It’s rough, it’s rough, but the community is coming together. It’s a blessing to see that.”

Since raw sewage was flowing in with the floodwaters, many of the homes in River Park have been deemed unsafe to live in, according to Angeline.

Along with being among the last to have power restored in their neighborhood, residents in River Park say that relief centers and shelters are being set up too far away for people who don’t have access to vehicles, CNN Newsource reported.

People who typically rely on bus services to get to their destinations have been severely impacted as bus service is still not running in many neighborhoods, including River Park. Latonia Latson told CNN that she is unable to go to a relief center to get bottled water and other necessities because she doesn’t have the transportation to do so.

President Joe Biden surveyed the damage in some of the hardest-hit areas Wednesday, appearing alongside Florida Gov. Ron DeSantis. Biden told Florida residents hit by the storm that the recovery process in the state would take “years” to be fully resolved.

“We have a long road ahead of us, rebuilding entire communities from the ground up,” Biden said. “I want the people of Florida to know … you have my commitment and America’s commitment that we’re not going to leave.”

Residents on Sanibel Island, one of the barrier islands that suffered the full force of Ian’s wrath, were allowed to return to view their homes Wednesday between the hours of 7 a.m. to 7 p.m., according to City Manager Dana Souza. Sanibel Island residents and business owners will be allowed on the island during the preset times via personal watercraft or watercraft for hire, but Souza explained that no one is to stay on the island. The ferry is still out of service.

Lee County Sheriff’s Office vehicles were loaded onto barges on Thursday to assist the residents of Sanibel. Officials stated that access to Sanibel Island by car would be available by the end of the month after repairs are made to the Sanibel Causeway.

The Florida Department of Transportation (FDOT) Monday began assisting with rebuilding roads and adding a temporary bridge on Pine Island, another barrier island that endured the full force of Ian. The department’s goal of completing road and bridge repairs by Saturday, Oct. 8, was met in “monumental timing,” DeSantis’ office said.

“We made it a priority, and we didn’t just get it done – we got it done quick,” DeSantis said. “I want to thank the dedicated FDOT crews for working around the clock to restore the community’s access to Pine Island.”

Jimmy Patronis, Florida’s top financial officer and fire marshal, warned Thursday that firefighters had battled a number of fires caused by electric vehicle (EV) batteries that were waterlogged from Ian.

“There’s a ton of EVs disabled from Ian. As those batteries corrode, fires start,” Patronis wrote in a tweet. “That’s a new challenge that our firefighters haven’t faced before. At least on this kind of scale.”

In a video that Patronis shared on Twitter, a bystander could be heard in the background saying that the firefighting crew used over “15 hundred gallons of water” to put the fire out.

As of Friday morning, around 123,000 customers were without power in Florida, a sharp drop from the peak of 2.6 million outages eight days ago, according to PowerOutage.US. In southwestern Florida, Lee, Charlotte, Sarasota and DeSoto counties — some of the hardest-hit areas — accounted for most of the state’s power outages. Lee County had more than 80,000 customers in the dark as of Friday morning.

Florida officials note that as power is restored in many locations, schools will begin reopening. According to DeSantis’s office on Wednesday, 69 districts have reopened, but many still remain closed. The Florida Department of Education (DOE) is working closely with school districts to ensure that the schools have the necessary resources to resume operations as quickly as possible. The DOE is also providing flexibility to many schools regarding attendance windows for reporting student enrollment. Schools in Charlotte and DeSoto counties are currently making plans to resume classes as early as next week.

Between damage to existing hospitals and patients having no homes to be sent back to, the medical system in Lee County faces many problems. Field hospitals, which will be staffed with dozens of medical workers from across the state and nation, are being set up to account for the overflow of patients.

Portable showers were set up outside the Fort Myers police station, and all residents had to do was bring a towel. The Fort Myers police officers supplied soap and warm water for everyone who came. Hundreds of people have already stopped by, according to AccuWeather National Reporter Emmy Victor. Laundry machines were also made available.

“Oh, it’s been six days since I took a shower, so it’s a big relief to get a shower,” Tom Demitrack, a Fort Myers resident, told Victor. “We don’t expect [to have water] for another three days, so it came in pretty handy.”

«Previous Post
Hurricane Ian: Behind The Numbers Of A Historic Storm»Next Post
Tropical Storm Julia Forms Over The Caribbean Sea, Forecast To Strike Nicaragua As A Hurricane