Why Air Pollution Increases Amount Of Heart Attacks And Strokes

“When inhaled, these very small particles penetrate deeply into the lungs and enter the bloodstream.” 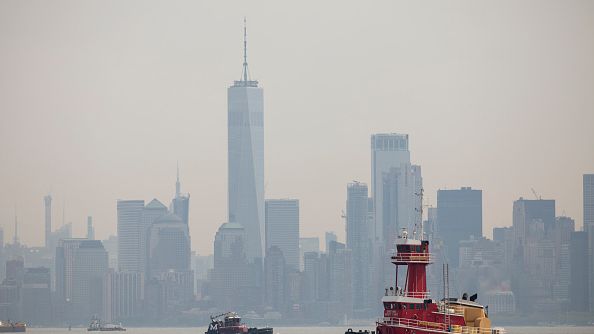 Air pollution increases exposure to a radioactive gas that triggers heart attacks and strokes, according to new research from Harvard. It contains colorless and odorless radon which is also the leading cause of lung cancer in non-smokers.

The phenomenon is boosting the toxicity of tiny particles called PM2.5s emitted by traffic and industry.

Lead author Shuxin Dong, a Ph.D. student at Harvard T.H. Chan School of Public Health in Boston, said: “These findings suggest particle radioactivity increases the risk of death from cardiovascular disease and enhances the damage from particulate matter. He added that ”this must be further investigated and may lead to targeted, cost-effective air quality regulations.”

The link between PM2.5s and deaths from cardiovascular disease has been known for decades. They are spewed by the burning of fossil fuels. They also come from diesel, brake pads, tires and road dust. Less than a 50th the width of a human hair, they get into the blood through the lungs making it more sticky – triggering inflammation.

Radioactivity occurs naturally as a product of the decay of uranium found in soil and rocks. Radon however, migrates into the atmosphere, turning into radiation-emitting isotopes known as alpha, beta and gamma.

Ms. Dong said: “We know PM2.5s are very small particles in the air that can be inhaled and cause many health problems, adding that :however, little is known about which physical, chemical or biological properties of PM2.5 fuel its toxicity.

“We studied gross beta-activity, a property of fine particulate matter that is a result of radon that attaches to particles and makes them radioactive, resulting in particle radioactivity. When inhaled, these very small particles penetrate deeply into the lungs and enter the bloodstream and circulate throughout the body.”

The team used spatiotemporal predictions of gross beta-activity, a way to use different variables across space and time, to provide refined predictions of exposure. They examined health records from more than 700,000 non-accidental deaths in Massachusetts between 2001 and 2015. It enabled them to estimate how long-term gross beta-activity exposure impacts death from cardiovascular disease, heart attack, stroke and all non-accidental causes.

Ms. Dong said: “The risk of death from cardiovascular disease, heart attack or stroke and all causes due to PM2.5 was higher, and therefore, more toxic when gross beta-activity levels were higher.”

In 2021, the American Heart Association joined with three other leading cardiovascular organizations urging the medical community and health authorities to mitigate the impact of air pollution on people’s health. According to the statement, an estimated 6.7 million deaths in 2019, or 12 percent of all deaths worldwide, were attributable to outdoor or household air pollution. As many as half of these were due to cardiovascular disease.

Aie pollution is likely to be responsible for millions of deaths per year. Long-term exposure is a leading global health concern. Even low concentrations could cause tens of thousands of early deaths every year in the US.

The study is in the Journal of the American Heart Association.