People Have Considerable Complaints About The Job Hunting Process

More than 70% find the entire process is “stressful” and “time-consuming. 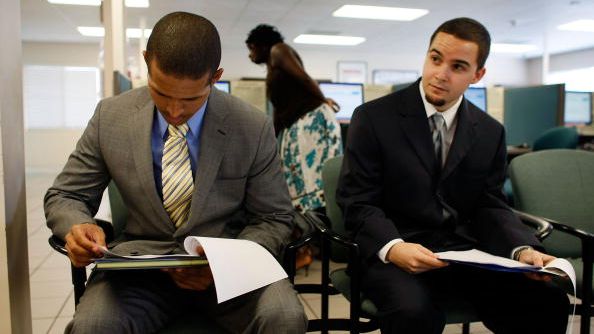 Gregory Tai (L), who lost his job working in marketing, and Javier Munoz fill out paperwork as they wait for a job interview as they compete with others for one of about fifty positions open with South Florida Workforce on on March 27, 2009 in Miami, Florida. (Photo by Joe Raedle/Getty Images)

Job seekers’ top concerns include being rejected for a position because they have “no experience,” having interviews last too long, and not knowing the pay ranges.

In a survey of 2,000 individuals who had looked for new jobs in the previous five years, it was shown that they averaged spent four hours searching for a single position, with 33% of those applications leading to an interview. However, 75% of respondents find the entire process “stressful” and “time-consuming.

Typical complaints include needlessly drawn-out interview procedures and false job listings. For the 54% of people who have turned down job offers after learning their potential pay, the lack of information regarding the yearly compensation, such as wide wage ranges, is a serious problem.

77% of respondents in the study, which was commissioned by Adzuna and carried out by OnePoll, agreed that employers had to be more open about their job advertisements. Businesses may find this worrying since it might damage their reputation and make it harder for them to hire talented employees. The majority of people (32%) believe that if an employer doesn’t disclose their wage in job advertisements, they are hiding something.

Similarly to this, 29% and 28% of respondents said that such actions give a company a bad reputation for professionalism and trustworthiness, respectively. While 56% said they would refuse an interview invitation outright if they weren’t aware of the pay a potential company was offering.

“With all the time and effort that goes into applying for jobs, it can be incredibly frustrating and stressful to stumble across issues along the way,” said Doug Monro, CEO and co-founder of Adzuna. “From the research, it’s plain to see salary is a critical component of the job process with job-seekers clearly pointing to a lack of clarity or detail on annual wages being a major frustration when applying for a job.

“Employers should be encouraged to be more transparent and include as many details on salaries in their job postings as possible to give candidates the financial peace of mind they need, as well as the all-important information around whether a role is right for them.”

“Jobseekers are increasingly concerned with finding employers that match their values and that they trust,” continued Doug Monro. “Being transparent by showing salaries on job postings is one way for companies to show they care about prioritizing fair pay.

“There is room for improvement and the onus is now on companies doing their diligence to present job opportunities that fairly reward candidates.”