Fatal Virus In Monkeys Poised For Spillover To Humans

“This animal virus has figured out how to gain access to human cells.” 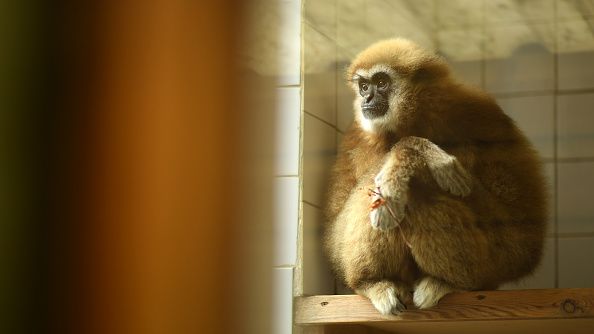 A monkey looks on from their enclosure as Preparations are made at Exmoor Zoo ahead of the Relaxing of Covid-19 Restrictions on June 11, 2020 in Barnstaple, England. (Photo by Harry Trump/Getty Images)

A fatal virus causing Ebola-like symptoms in monkeys is ‘poised for spillover’ to humans, scientists in Colorado have warned.

The University of Colorado Boulder team is watching the virus closely and calling for vigilance, evoking parallels to HIV which originated in African monkeys. So far no human infections have been reported, and it is unknown what toll it would have if it leaped to a human.

Senior author Sara Sawyer, a professor of molecular, cellular and developmental biology at CU Boulder said this virus’ capabilities are unusual. “This animal virus has figured out how to gain access to human cells, multiply itself, and escape some of the important immune mechanisms we would expect to protect us from an animal virus.

“That’s pretty rare. We should be paying attention to it”, Professor Sara added.

There are thousands of unique viruses circulating in animals across the globe, but most of them cause no symptoms.

However, over the past few decades more and more animal viruses are jumping to humans, wreaking havoc on unfamiliar immune systems with no experience protecting against them. These include Middle Eastern Respiratory Syndrome (MERS) in 2012, Severe Acute Respiratory Syndrome (SARS) in 2003, and SARS-CoV-2 (the virus that caused COVID-19) in 2019.

Professor Sawyer is a veteran in the field, having studied viruses leaping from animals to humans for 15 years, using laboratory techniques and tissue samples from wildlife across the globe.

This study honed in on arteriviruses which are common in human pigs and horses but understudied in chimps. They focused on the simian hemorrhagic fever virus (SHFV), responsible for deadly outbreaks in captive macaque colonies since the 1960s, by causing a lethal Ebola-like virus disease.

Professor Sawyer’s work demonstrated that a molecule called CD163 plays an important role in simian arteriviruses’ biology, allowing them to invade and infect target cells. Using laboratory experiments they discovered the virus was unusually skilled at latching onto the human version of CD163 to get inside human cells and rapidly make copies of itself.

Cody Warren, assistant professor in the College of Veterinary Medicine at Ohio State University, said: “The similarities are profound between this virus and the simian viruses that gave rise to the HIV pandemic. Just because we haven’t diagnosed a human arterivirus infection yet doesn’t mean that no human has been exposed. We haven’t been looking.”

Professors Warren and Sawyer noted in the 1970s no one had heard of HIV either.

A wide range of African monkeys carry high viral loads of many arteriviruses and some of these species are known to scratch or bite people when the species live close to one another. Scientists now know HIV was created by SIVs infecting monkeys in Africa, and likely jumped to humans in the early 1900s. When it began killing young men in the 1980s in the United States. there were no treatments in progress or tests.

Professor Sawyer said: “COVID is just the latest in a long string of spillover events from animals to humans, some of which have erupted into global catastrophes.

“Our hope is that by raising awareness of the viruses that we should be looking out for, we can get ahead of this so that if human infections begin to occur, we’re on it quickly.”