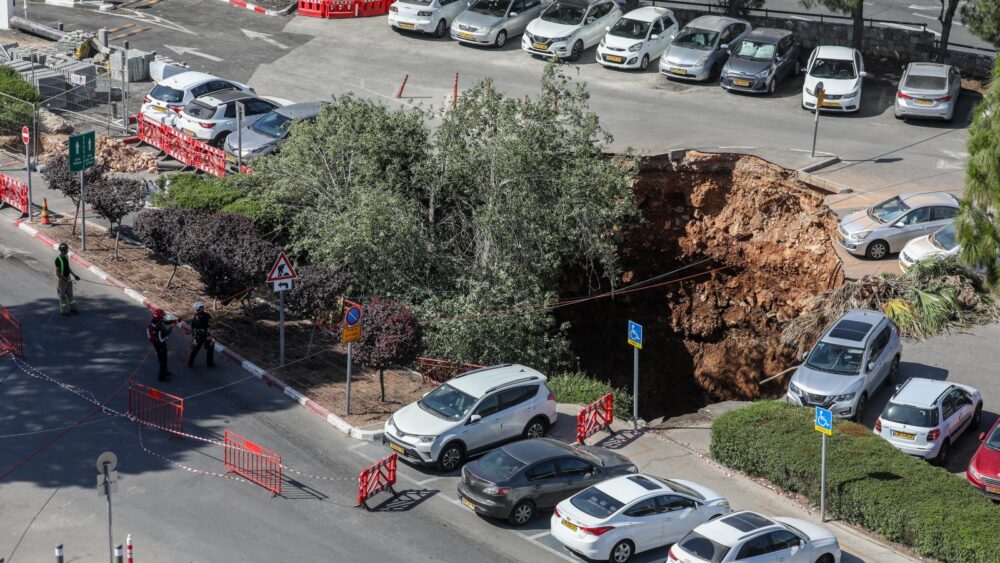 A parking lot collapsed into a giant sinkhole at Shaare Zedek Medical Hospital in Jerusalem, June 7, 2021. Photo by Olivier Fitoussi/FLASH90

It was a miracle that nobody was hurt when a large sinkhole suddenly opened on the busy Ayalon highway in Tel Aviv.

Nor was anyone hurt when three cars fell into a cavernous sinkhole that suddenly appeared in a parking lot at Jerusalem’s Shaare Zedek Medical Center last year.

But just two months ago, a 32-year-old man was killed when a sinkhole swallowed the illegally built private pool in which he was swimming in Karmei Yosef.

Whether the issue is faulty drainage or heavy construction that causes the underlying rock layer to disintegrate, sinkholes can kill — and they always surprise.

One month ago, a massive 656-foot-deep sinkhole opened up in Chile, and in July, a van drove into a sinkhole in New York. Sinkholes are a problem affecting every country in the world.

An Israeli startup called Exodigo is offering a nonintrusive way to remove the surprise factor.

By providing a detailed and accurate map of underground utilities, without the need for excavations, Exodigo’s technology helps minimize risks in everyday construction and infrastructure activities as well as emergency situations like sinkholes.

That is why the highway authorities called on Exodigo to send a crew to the Ayalon disaster site to perform an underground scan on the night of the collapse.

The team quickly identified potential areas of risk on the highway through its multi-sensing artificial intelligence platform.

These insights helped local authorities make informed decisions about corrective actions to reinforce the road against further sinkholes in that area.

How does the technology work?

Exodigo’s underground mapping of real estate and infrastructure projects is possible through AI-based analysis of data obtained from sensors connected to drones or on a rolling ground cart.

No drilling or blind digging is involved in the process.

“Think of it like combining the scanning power of an MRI, CT scan, and ultrasound all into one image of what is beneath the ground,” said CEO Jeremy Suard, who cofounded Exodigo with CTO Ido Gonen and CPO Yogev Shifman.

The resulting digital 3D map shows exactly what is underground, including pipes and cables, as well as information on the soil layers, rocks, minerals, and even groundwater.

Exodigo’s technology was launched earlier this year and has been successfully implemented in several projects in Israel and the United States.

“More than $100 billion is spent on excavation and drilling every year, all with the goal of discovering what’s underground. This problem affects countless industries, from construction and buried utilities to rare metals exploration, oil and gas,” said Suard.

“The problem is two-fold: it’s costly to dig up the earth, and the unnecessary use of heavy equipment creates avoidable greenhouse gas emissions. And then there’s the unexpected consequences – leaks, explosions, project delays, and more – which cost billions of dollars annually and even loss of lives.”

Having raised $29 million in seed money last February, Exodigo is developing technology for additional markets, aiming for noninvasive determination of soil compositions for the fields of construction and mineral exploration.

‍“Our goal is to minimize the number of excavations and loss of revenue caused by unexpected utilities, de-risking the entire project. We also lower its overall carbon footprint by making unnecessary drilling and use of the wrong machinery obsolete,” Suard explained.

Exodigo is presenting its platform at the InnoTrans international transport technology trade show in Berlin this week.