While there is clear support for lawful immigration, there are also calls for stronger border controls. 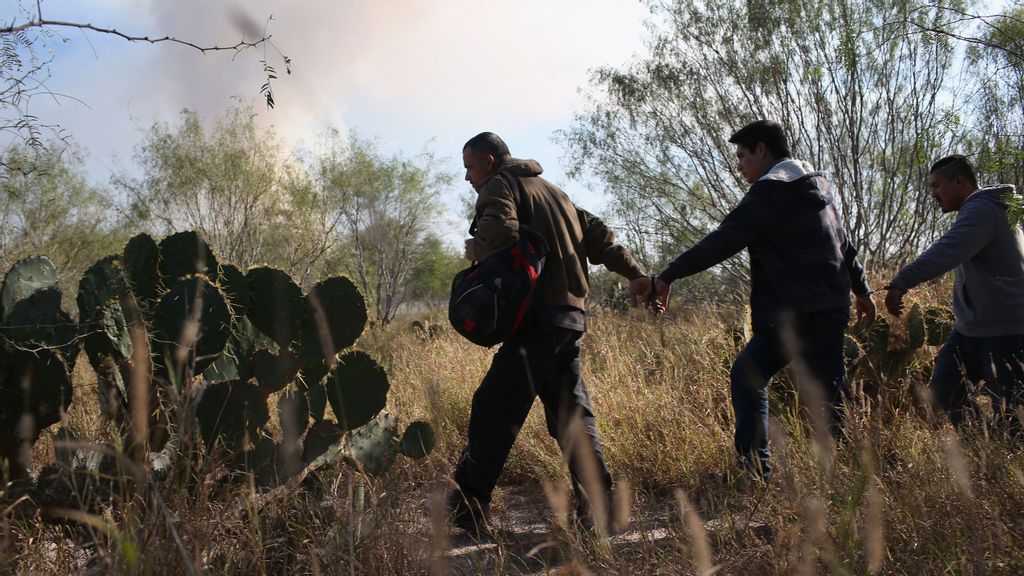 Immigrants walk handcuffed after illegally crossing the U.S.-Mexico border and being caught by the U.S. Border Patrol on December 7, 2015 near Rio Grande City, Texas. Border Patrol agents continue to capture hundreds of thousands of undocumented immigrants, even as the total numbers of those crossing has gone down. (Photo by John Moore/Getty Images)

A majority of Americans want the funding for hiring 87,000 new IRS agents to be redirected to hiring U.S. Border Patrol agents instead, according to a new poll.

The Inflation Reduction Act, signed into law by President Biden on Aug. 16, includes $80 billion to hire new IRS agents — almost doubling the number of employees at the tax collection agency. A White House Fact Sheet explains the goal of hiring a new army of agents as “cracking down on large, profitable corporations with more than $1 billion in annual profits that currently get away with paying little to no federal income tax.”

No new funding has been approved for hiring additional U.S. border patrol agents.

Some 52 percent of Americans surveyed strongly or somewhat approved of moving the hiring money from the IRS to the border patrol, according to a new poll from Scott Rasmussen’s RMG Research. Some 33 percent did not agree with shifting the funds to protect the border.

Another 65 percent of Americans tell pollsters they want “the U.S. military sent to the border to secure it,” pollster Scott Rasmussen said.

At the same time, a larger majority of Americans favors mass deportation of undocumented migrants, while an even larger number supports legal immigration. Some 61 percent of Americans favor the forcible relocation of people who have illegally entered the United States, according to a new poll from Scott Rasmussen’s RMG Research.

“This emphasizes what we’ve seen in recent polling, that the public is concerned about the failure to secure the border, and they want fairly drastic steps taken,” said Rasmussen.

The poll of 1,200 registered voters was conducted on September 22-23, 2022, and had an error margin of +/- 2.8 percentage points. Rasmussen’s Immigration Index is about five points below where it was in late October 2020, indicating voters are looking for tighter immigration control from President Biden’s administration.

Republican governors in Arizona, Texas and Florida have accused the Biden administration of poorly securing the southern border. To emphasize their concerns, border-state governors have sent a total of nearly 1,000 illegal border-crossers to Martha’s Vineyard, Mass., Chicago, and Washington, D.C. — places that have held themselves out as sanctuaries for illegal migrants.

D.C. and Chicago mayors have complained that the migrants were deposited without any advance notice and their presence was straining humanitarian relief services. Those complaints echo what border states governors have said about the surge of people flowing across America’s southern border.

The Biden administration has made a number of changes regarding border control and immigration enforcement, including efforts to boost refugee admissions, preserve deportation relief for unauthorized immigrants who came to the U.S. as children, and suspending the “public charge” rule that denies green cards to immigrants who might use public benefits like Medicaid, according to Pew Research.

Forty-six percent of those polled said they strongly or somewhat approved of the actions taken by the three governors, versus 42 percent who disapproved.

When asked to identify an ideal solution, 50 percent supported removing the individuals from the country, while 11 percent preferred the actions of the three governors. Thirty-one percent said the ideal response would be to give the illegal entrants “legal status and a path to citizenship.”

Asked to rate President Biden’s job performance, 40 percent strongly or somewhat approved, versus 56 percent who disapproved, for a net disapproval of 16 percentage points.