Magen David Adom trains Americans how to save lives in the crucial 7 minutes before the ambulance arrives. 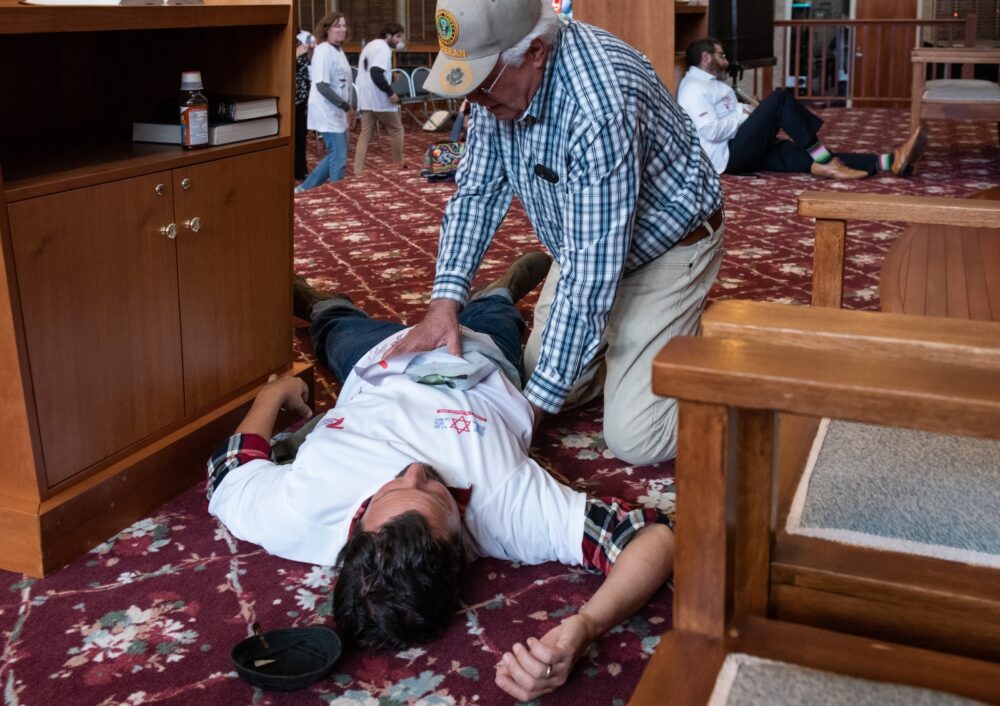 Rabbi Aaron Braun training for handling a terror attack in a course given at a Chicago synagogue. (Photo courtesy of American Friends of Magen David Adom)

Members of Magen David Adom (MDA) – Israel’s version of the Red Cross – flew to Chicago to train faith communities how to respond during the first seven minutes in the case of a terror attack.

A team from MDA, Israel’s national emergency medical and blood-services organization, was invited to the Windy City after the recent Highland Park shooting that killed six innocent bystanders – adding to the tragic list of terror attacks on public and religious institutions in the United States.

MDA paramedics conducted training sessions at faith centers across Chicago from September 12 to 14. More than just a first-aid course, “First 7 Minutes” provides participants with the ability to initiate care while ensuring people’s safety.

First 7 Minutes director Rafael Herbst, a senior MDA paramedic and instructor, said that while it was not possible to know when violence might strike, those who participated in the course would “know what to do when it does.”

Braun said he was proud to be able to share this expertise with his own congregation and the larger community.

“I believe we owe it to ourselves and our community to be prepared to react and save lives, if the unthinkable should occur,” he said.

Participants in the Chicago First 7 Minutes training sessions learned how to minimize casualties by remaining safe during the chaos of a violent incident, and how to administer critical first aid in the time it typically takes first responders to arrive.

Pronounced “mah-dah,” MDA is an acronym for the Hebrew phrase “Red Shield of David” and is represented by a six-pointed red star.

MDA, a member of the International Federation of Red Cross and Red Crescent Societies, responds to disasters around the world.

“MDA has emerged as the most experienced mass-casualty response organization in the world,” said Herbst, who became an MDA paramedic after his medic uncle was killed in a terror attack.