Dinonsaurs Were Headed For Extinction Before Asteroid Hit Earth

Paleontologists have long debated whether the dinosaurs were declining or having their heyday at the time of the collision. 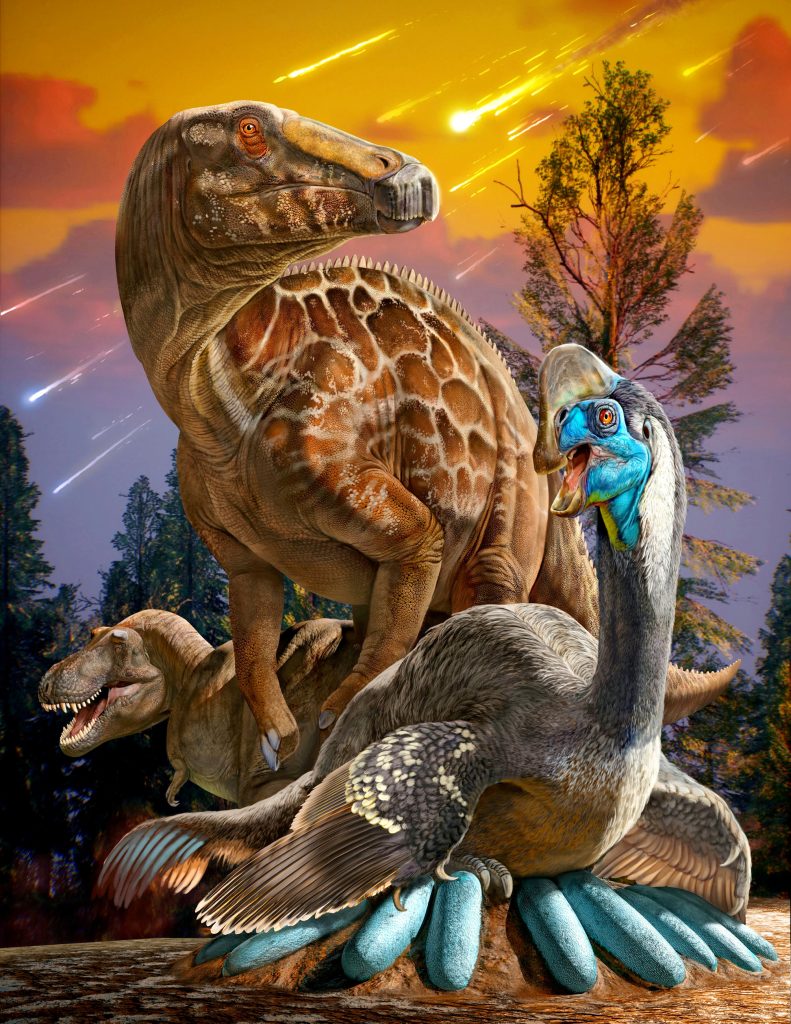 Artist’s depiction of Late Cretaceous oviraptorosaurs, hadrosaurs, and tyrannosaurs living in what is now central China. (IVPP via SWNS)

A new study of dinosaur eggs from the time of their mass extinction reveals the species was already on the way out before an asteroid struck.

Researchers who examined more than 1,000 fossilized dinosaur eggs and eggshells found dinosaur diversity was declining when the asteroid smashed into the earth 66 million years ago.

Paleontologists have long debated whether the dinosaurs were declining or having their heyday at the time of the collision.

Experts examining eggs from the fossil-rich Shanyang Basin in central China believe that a long-term reduction in species meant the reptiles were already vulnerable to becoming extinct.

They discovered only three species in the 1,000 eggs they studied, and believe the small range in central China remained at similar levels for the two million years before the mass extinction.

Two were from a group of toothless dinosaurs known as oviraptors, and the other is from plant-eating duck-billed dinosaurs, otherwise known as hadrosaurids.

Among the eggs were a few bones, which revealed tyrannosaurs and sauropods also lived in the area between 66.4 million and 68.2 million years ago.

Renowned sauropods include the diplodocus and brachiosaurus.

Researchers from the Institute of Vertebrate Paleontology and Paleoanthropology (IVPP) of the Chinese Academy of Sciences argued this decline could have come from known global climate fluctuations and massive volcanic eruptions.

Eruptions from the Deccan Traps – one of the largest volcanic systems on earth – and other volcanoes could have led to ecosystem-wide instability, threatening the mass extinction of all dinosaurs that aren’t birds.

Today, birds are the only descendants of dinosaurs.

“The end-Cretaceous catastrophic events, such as the Deccan Traps and bolide impact, probably acted on an already vulnerable ecosystem and led to nonavian dinosaur extinction.”

Using the eggs, scientists managed to create a timeline of two million years right before the asteroid hit during the end of the Cretaceous period.

Their timeline allows a resolution of 100,000 years and will let them make direct comparisons with data across the world.

It lines up with similar data taken from North America, both suggesting dinosaurs were probably in decline across the globe before their extinction.

The study, published in the journal Proceedings of the National Academy of Sciences, looked at around 150 meters of rock and took detailed age estimates by computer modeling over 5,500 geological samples.