The historic Sanibel Island Lighthouse was put to the test once more when Hurricane Ian roared ashore. 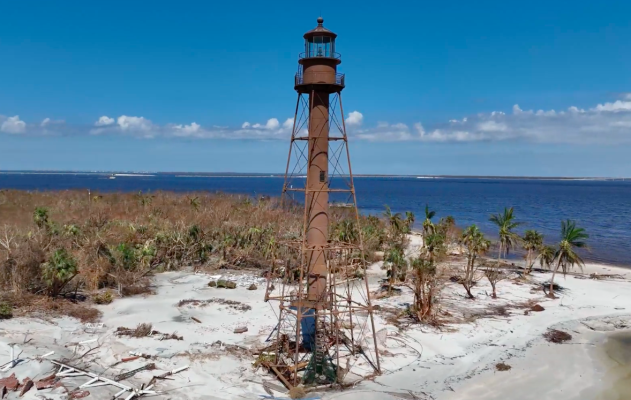 The historic Sanibel Island Lighthouse has weathered many a hurricane, but the fortitude of the skeleton lighthouse was put to the test once more when Hurricane Ian roared ashore.

The high-end Category 4 hurricane swept through the area on Sept. 28, destroying countless buildings and cutting the island off from the mainland when it collapsed the causeway. At the easternmost point of the island, the house where the lighthouse caretakers used to live until 1949 was nowhere to be seen from the area in photos following the storm. But the 98-foot lighthouse remained.

The Sanibel Island Lighthouse was first lit on Aug. 20, 1884, and both the lighthouse and living quarters were added to the National Register of Historic Places in 1974. It was one of the first iron lighthouses to stand sentinel on the Gulf Coast and north of the Florida Keys.

The lighthouse has also survived hurricanes, including Donna in 1960 and Charley in 2004. At least 20 hurricanes have passed within 75 miles of Sanibel Island since 1873, according to the city, posing a significant threat to lives and property on the island. Ian was the latest hurricane to impact the island and threaten to topple the lighthouse.

That’s not to say that the lighthouse passed unscathed through the storm, however. One of the 138-year-old structure’s legs was torn free amid Ian’s ferocious winds and powerful storm surge.

Lighthouse Digest Magazine posted images on Facebook Friday showing before and after photos of the lighthouse. The image from before Ian shows the lighthouse surrounded by trees and flanked by the keepers’ house, the sandy shore neatly meeting the ocean. But after Ian, the lighthouse sits alone. Even the trees that once surrounded it were stripped, and the shore has crept inward toward the base due to erosion caused by Ian.

“Look closely and you will notice that the bottom of one of the support legs is gone, and erosion under the other legs puts the lighthouse in a precarious position. There is also some other minor damage to the tower,” the magazine said over Facebook, adding that the structure may be in danger of collapse.

«Previous Post
‘Lucky We Could Somehow Breathe,’ Says Survivor Of Avalanche»Next Post
When The Skies Went Dark: Historians Pinpoint The Very ‘worst Year’ Ever To Be Alive