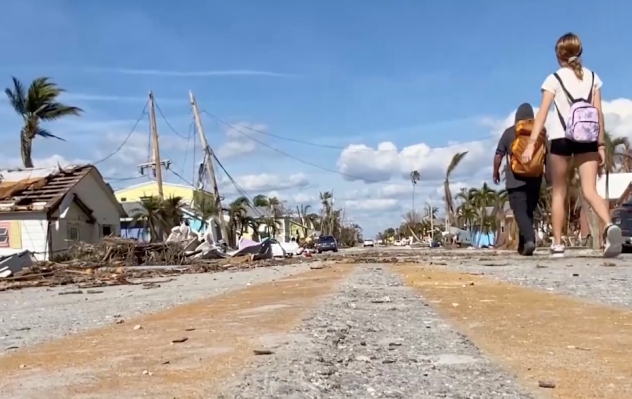 That was how resident Jenna Lombardo described the devastation left by Hurricane Ian. Behind her, homes laid crumpled and crushed alongside the sand-covered road, and at least one of the homes had collapsed into a sinkhole.

The utter destruction of the island was juxtaposed with the bright colors of what remained of a few of the buildings — a neon green building with its roof pried open, a Pepto-Bismol pink structure surrounded by debris and pastel shutters framing swaying palm trees and power lines.

One royal blue house had partially plunged into the sea. A bramble of broken wood and outdoor furniture blocked off one of the entrances, yet somehow a blue mailbox with three decorative dolphins managed to remain bolted to its cement square foundation.

While still upright, the road beneath it had fractured, separating from where the causeway once met the road. Here, a boardwalk provides a makeshift connection between the two roadways for pedestrians.

“It is total destruction. .