Joe Venuto has called many places home throughout his 98 years. 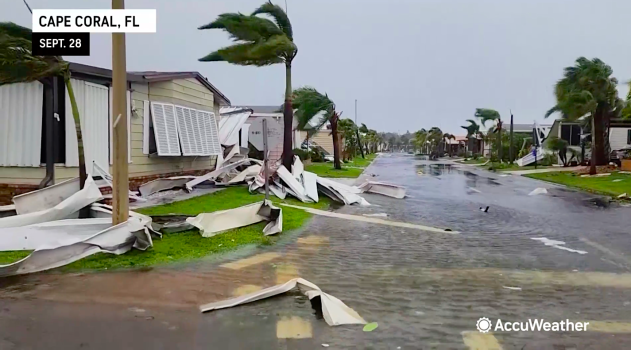 Joe Venuto has called many places home throughout his 98 years. He served in World War II and has lived in Southern California, Delaware and Belgium before settling down in Sanibel, Florida, with his wife Nancy.

But this is the first time they have lost everything from a storm. “It was intense,” said Lauren Davies, Joe and Nancy’s daughter. “I have lived there for 35 years; I was here for Charley, Irma, everything. The surge was what no one understood.”

Davies recalls a neighbor saying the storm surge had to be at least 10 feet tall. “It’s unbelievable, you know, we’re on a golf course and then the golf course was about this much under water,” said Joe, with his hand held to his head to describe the water level.

The golf course was where the Coast Guard landed a helicopter to rescue the families that had been stranded because of the flooding.

This family spent 48 hours on the island after the Category 4 hurricane made landfall. The hurricane washed away the bottom of their house and flooded their three cars. The couple was at a loss for words when sharing their experience about the treatment they received during their rescue. “All I can tell you is how fortunate we have such wonderful young men,” Nancy said. “They were so good and so kind to us, I mean they treated us really special.”

The couple, who has been married for 72 years, shared their love for life in Sanibel, and won’t let Hurricane Ian take them away from the island, at least not forever. “We figured we’re checking out for a year,” Davies said.

Nancy elaborated how, during her life, she has collected many memories to look back on, but her experiences with Hurricane Ian are some she never saw coming. “You know, when you get as old as we are, you have a lot of things to remember. I’d never think this is the way it would be,” Nancy said.

Residents from nearby areas expressed similar reactions. Most find themselves lost, not knowing where to start rebuilding, but also surprised they survived the storm’s passing.

“The thought deep in our heads was ‘We’re not actually going to survive this,'” Kelly McWilliams, resident of Cape Coral, Florida, told AccuWeather. “And I was thinking, ‘Do I attempt to text my daughter like all of our bank account numbers and things like that?’ That was what was in my head, you know. I didn’t want to say it out loud but that’s what I was thinking.”

Venuto, a World War II veteran who served as a Lieutenant in the U.S. Navy and a gunnery officer, is ensuring the Coast Guard rescue crew receives the recognition they deserve. “They deserve a lot of credit for the way they’re helping people. It’s extremely appreciated,” Joe told AccuWeather.