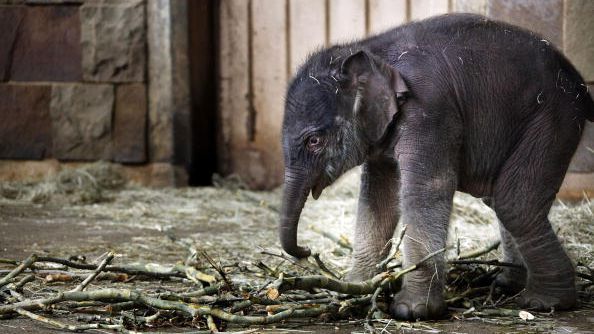 The asian elephant cub Bimas eats at Tierpark Friedrichsfelde on March 19, 2010 in Berlin, Germany. The baby was born by his mother Cynthia on March 15, 2010 and today, made its first public appearance. (Photo by Carsten Koall/Getty Images)

In honour of ZSL Whipsnade Zoo’s patron, Queen Elizabeth II, the zoo named a baby elephant the Thai word for ‘Queen’. The late Queen once met the calf’s mum.

The conservation Zoo gave the privilege of naming the not-so-tiny infant to ZSL conservationists who work in Thailand, protecting endangered, Asian elephants in the wild. The conservationists chose the name Nang Phaya (pronounced ‘nang-pie-yah’), which is an animal-related Thai word meaning ‘queen, or strong, female monarch.

The female elephant calf was born at ZSL Whipsnade Zoo on Monday 22 August, to mum Donna, whom Her Majesty Queen Elizabeth II met when she opened the Zoo’s Centre for Elephant Care in 2017. A photograph of Her Majesty feeding Donna a banana featured on her official Christmas card that year.

ZSL’s Elephant Project Officer, Saravanee Namsupak said: “When we saw photos of the adorable elephant calf, we fell in love instantly, and were so delighted to be asked to name her. We wanted a name that represented who she is as a future matriarch of the Whipsnade herd, but also her part in the wider story of endangered Asian elephants, like those we work to protect in Thailand”.

“Naming her Nang Phaya, which is a Thai word for queen or matriarch, seemed like the perfect way to pay tribute to Her Majesty The Queen for her work as ZSL’s patron and honor Donna’s famous encounter with her, while symbolically connecting the calf to the herds of Asian elephants in Thailand that are under threat from increasing habitat disturbance and loss which escalates human-elephant conflict and the wellbeing of both elephants and communities”.

Asian elephants are classified as Endangered by the IUCN Red List of Threatened Species and recent estimates suggest that as few as 7000 are left in South-East Asia.

Elephant Team Leader at ZSL Whipsnade Zoo, Stefan Groeneveld said: “Nang Phaya is a really important addition to the endangered species breeding programme for Asian elephants, and as the boisterous, youngest female in a matriarchal family line, her new name is perfect”.

“Definitely a leader-in-the-making, Nang Phaya is energetic and playful, climbing on anything and everything and racing around the elephant habitat while her mum Donna, grandma Kaylee and the rest of the herd try to keep up. Although not on solid food yet, she has been experimenting with using her trunk to pick up twigs and is gradually getting the knack of using it”

“She’s currently weighing in at a healthy 152kg and putting on about a kilo a day”.