Life could be lurking under the south polar ice cap on Mars, according to new research. 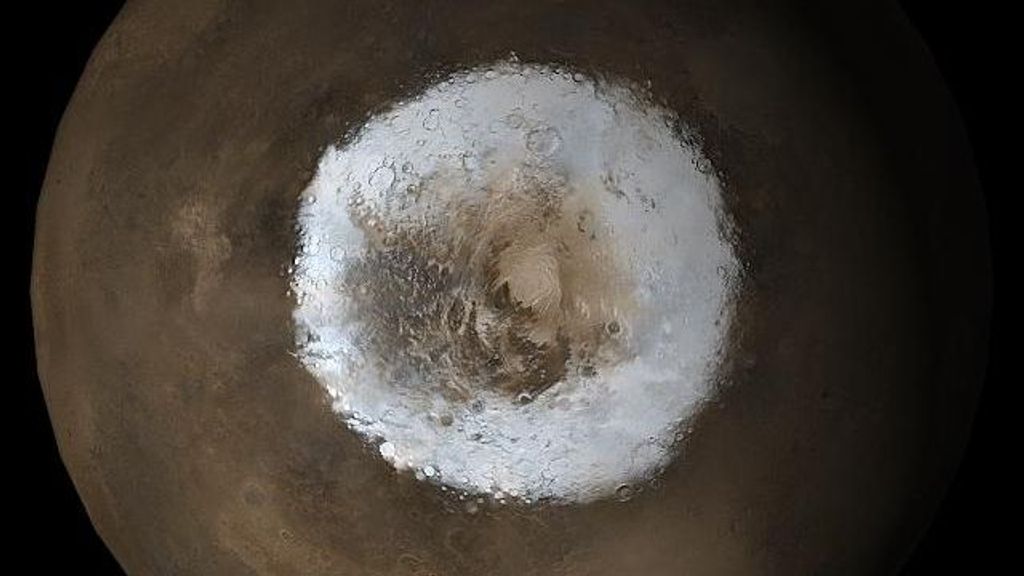 A new study suggests the presence of liquid water and recent geothermal activity under the southern polar cap of Mars – an environment favorable to life.

Scientists have found evidence of a vast lake beneath the frozen and flat ground, identified from data gathered by an orbiting spacecraft.

An instrument onboard NASA’s Mars Global Surveyor (MGS) can measure natural features or topography. The laser altimeter sends beams to the surface – then times how long it takes for them to bounce back.

“The combination of the new topographic evidence, our computer model results, and the radar data make it much more likely that at least one area of subglacial liquid water exists on Mars today,” says lead author Professor Neil Arnold, from Cambridge’s Scott Polar Research Institute. “Mars must still be geothermally active in order to keep the water beneath the ice cap liquid.”

The Red Planet was once warm and wet. Discovering liquid water is the Holy Grail for alien hunters, as it is a prerequisite for all life as we know it.

Mars has thick ice caps at both poles – roughly equivalent in combined volume to the Greenland Ice Sheet. They had been thought to be frozen solid due to the cold climate.

But the international team’s analysis revealed a six to nine-mile-long surface undulation comprising a depression and a corresponding raised area. Both deviate from the surrounding ice by several meters. This is similar in scale to undulations over subglacial lakes here on Earth.

Computer simulations showed the phenomenon could be explained by liquid water on the bed. Subtle shape and height patterns matched predictions of a body of water.

Harmony between the model and the actual MGS observations – along with ice-penetrating radar proof – point to the south polar ice cap harboring a lake.

“The quality of data coming back from Mars, from orbital satellites as well as from landers, is such we can use it to answer really difficult questions about conditions on, and even under the planet’s surface, using the same techniques we also use on Earth,” Arnold says.

Results agree with earlier ice-penetrating radar measurements that were originally interpreted to show a potential area of liquid water beneath the ice.

There has been debate over this interpretation – with some studies suggesting the signal is due to something else. The study in the journal Nature Astronomy provides the first alternative evidence of a lake beneath the three billion-year-old south polar ice cap.

The European Space Agency’s Mars Express satellite has an ice-penetrating radar called MARSIS which can see through the cap. In 2018 it revealed an area at the base of the ice that strongly reflected the signal – suggesting an area of liquid water three times bigger than the island of Manhattan.

But subsequent studies suggested that other types of dry materials – which exist elsewhere on Mars – could produce similar patterns of reflectance.

Given the cold climate conditions, liquid water beneath the ice cap would require an additional heat source, such as geothermal heat from within the planet, at levels above those expected for present-day Mars.

This left confirmation of the existence of this lake awaiting another, independent line of evidence.

On Earth, subglacial lakes affect the shape of the overlying ice sheet – its surface topography.

The water in subglacial lakes lowers friction between the ice sheet and its bed, affecting the velocity of ice flow under gravity.

This in turn affects the shape of the ice sheet surface above the lake, often creating a depression in the ice surface followed by a raised area further down-flow.

“It is exciting to use these techniques to find out things about planets other than our own,” Arnold says.

Billions of years ago, Mars was a much more Earth-like place where water pooled in seas, carved enormous canyons and bubbled from hot springs.

Life, many astrobiologists speculate, may have had no difficulty getting started there. It may even have managed to endure in some diminished, limited way.