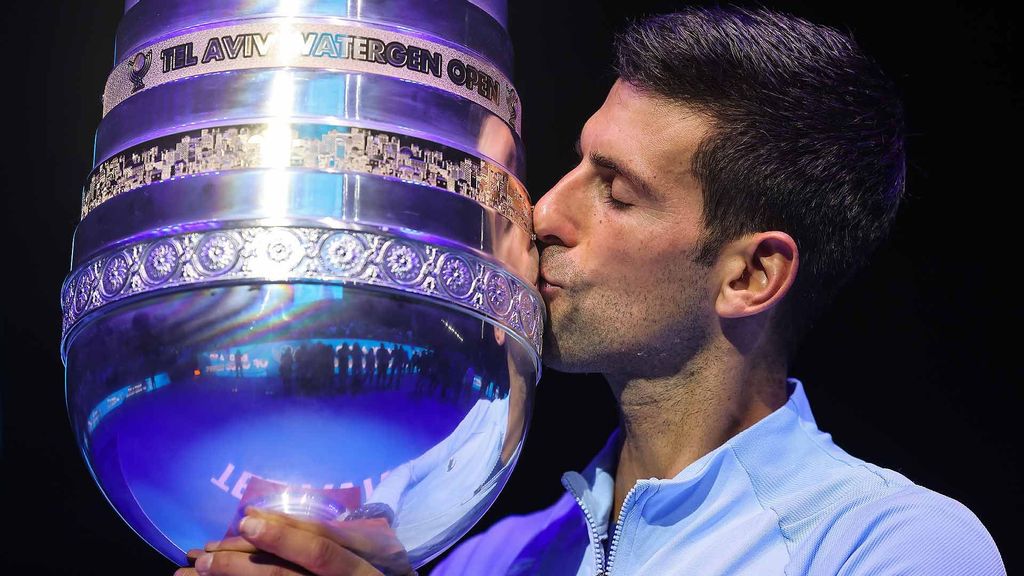 Novak Djokovic won his third trophy of 2022 and the 89th of his career at the Tel Aviv Watergen Open on Sunday, defeating Marin Cilic in the tournament final in straight sets. Djokovic, 35, won 6-3, 6-4 to build on an already successful tennis season, adding the Israeli title to his ATP tour success in Rome and his historic win at Wimbledon. It was the Serbian’s 19th victory over Croatia’s Cilic in 21 encounters dating back to 2008.

His appearance at the Tel Aviv Watergen Open came off the back of the Laver Cup, which drew the attention of a global audience after long-time rival, Roger Federer, announced it would be his last tournament. In a match up that saw his team (Team Europe) lose the Laver Cup for the first time since the tournaments’ inception, Novak Djokovic lost in three sets to Canadian tennis star, Felix Auger-Aliassime. After the loss, Djokovic revealed a wrist injury that had been bothering him for days leading up to the tournament. His win at the Tel Aviv Watergen Open, was a positive sign of his injury being behind him and a display of top form despite the numerous lay-offs this year.

Due to his unwillingness to get immunized against the coronavirus, Djokovic, was recently barred from competing in the US Open and the entire North American hard court season. This is the second Grand Slam of the year that he missed after previously being barred from competing in the Australian Open in January. His first appearance at the Tel Aviv Watergen Open was only his second competitive tournament and third singles match since winning his seventh Wimbledon title and 21st Grand Slam in July. In numerous interviews he has reiterated that he doesn’t regret making the decision to not be immunized against the coronavirus, believing that everyone should be able to have control over what they do with their bodies. Being the male tennis player with the second most Grand Slam titles in history, only one behind Rafael Nadal, Djokovic remains unwilling to compromise on his convictions even if it costs him being considered the greatest player of all time.

In a recent interview with i24News, Djokovic, spoke of being thrilled to be able to play in Israel despite criticism over this decision “I receive criticism for a lot of different things and decisions that I am making, but I’m a professional athlete, and I am a tennis player. And if I choose to play a tournament, there is a reason why I’m choosing that. So, I am happy that i am here, It was a very good decision, in my opinion.”

Having spent the most weeks in tennis history as the highest ranked player, a record 373 weeks, Djokovic, will be hoping to regain his status as the top seed. However, that will require more playing time in tournaments and successfully featuring at Grand Slams. With the next edition of the Australian Open on the horizon, it is unclear whether Djokovic will have the opportunity to compete for one of the most prestigious prizes in tennis, but his tenacity and mental fortitude may just be the key to keep him in the hunt for additional gold.