‘Worst Hurricane I Have Ever Been In’: Floridians Pick Up The Pieces Of Ian’s Aftermath

“It’s very sad. I know that there was people screaming for help and people still on roofs,” Reidy said. 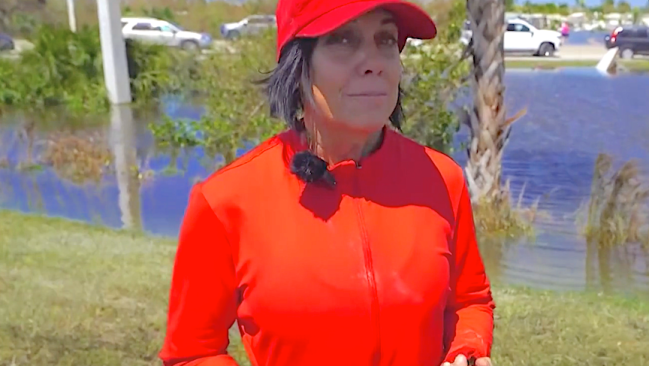 “It’s kind of hard to talk about because we don’t have a place to go,” Michelle Reidy of Iona, Florida, told AccuWeather on Thursday – one day after Category 4 Hurricane Ian crashed into southwestern Florida with maximum sustained of 150 mph, causing utter devastation.

Reidy is one of the longtime residents of the Iona community, which is about 12 miles away from Fort Myers. Yet in 29 years, she said, she had never experienced or seen a hurricane like Ian.

“Our families have lost everything,” Reidy said, her voice almost breaking. “There is, I can tell you, like a boat sitting almost like in our apartment. It’s all underwater.”

As the hurricane thrashed the area, destructive storm surge wreaked havoc on parts of southwestern Florida. Reidy noted that the storm surge left behind 6 to 8-foot-high water lines on her walls.

“It’s very sad. I know that there was people screaming for help and people still on roofs,” Reidy said.

Along with her son, her grandson and her blow-up canoe, Reidy said she was fortunate enough to be able to wade in and recover some personal belongings – even save a few family members.

“We waded in through the water, and we were able to get our canoe to get a few things out and save our cats,” she said. Still, Reidy explained that she doesn’t know what is next for her and her family – a sentiment that was echoed by others who spoke with AccuWeather and asked where one even starts when beginning to pick up the pieces of a monster storm like Hurricane Ian.

“This is the worst hurricane I have ever been in, and I have been in like five or six of them,” Two Feathers said in the interview Thursday.

Wadell reported that the city had no running water, little to no cellphone service and still no power, meaning people were fully dependent on batteries or generators to keep some lights on at night.

But, there were some silver linings even in the darkness following the destructive hurricane.

In Fort Myers, Lewis McDonald had anchored his boat in a port ahead of the hurricane. Preparing for the worst, he ended up being pleasantly surprised by what he found in the aftermath.

“In ‘95, my father and I built the ‘MacAttack’, and God spared us,” he said before his voice broke. “Because when it broke free, it went all the way over there with the mangroves, and it settled down.”

McDonald believes his physical possession with the most emotional significance has a chance to keep the legacy alive after some repairs.

“It’s special because my father and I built the boat, and then he died of cancer,” McDonald said. “So, it’s special.”