“Since I left school I have been involved with lorry’s following all the different drivers tips and advice”, said the teen. 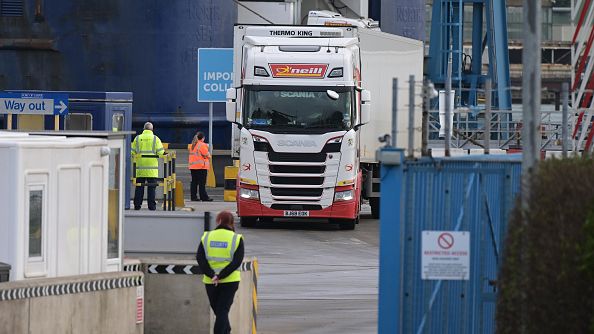 Robbie Smith is behind the wheel of a lorry just two months after his 18th birthday. He said he has had some funny looks from people when he’s out driving.

He passed his test last Friday after only two days of training because the vehicle he was learning in was off the road for an MOT. The teen said he couldn’t believe it when the examiner told him he was the youngest HGV driver in the UK.

Robbie, from Edinburgh, said he has always been interested in lorries and is delighted to be following in the footsteps of his dad Duncan Smith, 41, who is also a HGV driver.

Robbie started off cleaning up in the yard but progressed through the business – and was at work in the morning before most of the drivers checking over the lorries.

Robbie said: “My dad is a lorry driver and I have always been interested in it.

“I left school when I was 15 and I knew I would be guaranteed a job with my dad. He has had the business for about four years now.

“Since I left school I have been involved with lorry’s following all the different drivers tips and advice.

He added that “everyone at work has been great and really supportive with advice and encouragement.

“I am hoping one day I can sit my class C+E, so I can drive around Europe in the future. Although I’ve passed I’ll still be learning every day.”

Proud dad-of-three Duncan said Robbie has always had a passion for driving and is thrilled his son has passed the HGV test. He said the instructor told him Robbie, who passed his driving test aged 17, was a natural.

Duncan said: “I am extremely proud. “I didn’t expect him to be the youngest HGV driver in the UK.

“He started off just clearing the yard, going out on the trucks with other drivers to be the loader, and then he started doing wee repairs like headlights.

“He would be in before everyone else in the morning.

“For me to be able to work with my son and hopefully pass it all on to him one day is great. At his theory test the invigilators had to keep asking to see his license again.

“He loves driving and has always had a passion for it. He only had two days of training, so I wasn’t sure he was going to be ready for the test. But the instructor said he was a natural, he only got six minors out of 15″ said Duncan.