After Hurricane Ian, a monstrous Category 4 hurricane and one of the strongest storms to ever hit the United States. 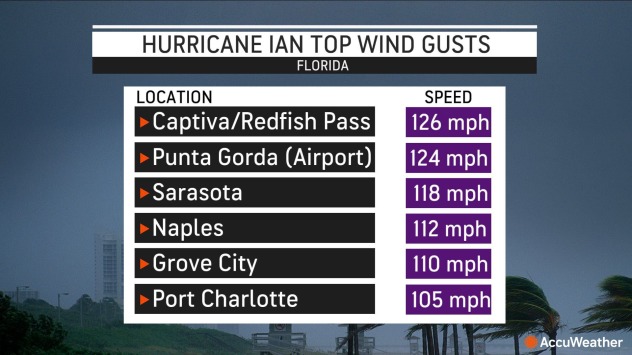 The shocking scenes of destruction hint at how sweeping and long-lasting the impact across Florida will be felt. The economic fallout caused by the storm will be immense, AccuWeather Founder and CEO Dr. Joel N. Myers said -- on par with some of the worst hurricane damage in U.S. history.

The devastation across southwest Florida after Hurricane Ian, a monstrous Category 4 hurricane and one of the strongest storms to ever hit the United States, made landfall continued coming into sharper focus as rescue crews reached the hardest-hit areas.

As of Friday, at least 21 fatalities were confirmed by Florida Gov. Ron DeSantis. Meanwhile, rescue crews continued to search for the missing and nearly two million across the state remained without power. The economic losses due to Hurricane Ian are estimated to be $100 billion to $120 billion, according to AccuWeather Founder and CEO Dr. Joel N. Myers.

The news from DeSantis came against a bleak backdrop of what the death toll might eventually be. President Joe Biden warned during a press briefing at FEMA headquarters on Thursday that Ian could be the “deadliest” hurricane in Florida’s history.

In a press conference on Thursday, Florida Gov. Ron DeSantis declined to address the death toll from Hurricane Ian and he disagreed with the president’s statement that Ian could be the deadliest hurricane in Florida’s history, the Tampa Bay Times reported. DeSantis recalled the 1928 hurricane that killed more than 2,500 people in Florida after striking Palm Beach County.

“I don’t think we will be anywhere approaching that,” DeSantis said, according to the Tampa Bay Times. Desantis also pointed to hundreds of successful rescue operations that took place in the hours since Ian’s plowed through the Florida Peninsula.

More than 500 people in Charlotte and Lee Counties, two of the hardest hit counties, had been rescued on Thursday, the Florida Divison of Emergency Management said, The New York Times reported.

What’s not in dispute is the tremendous damage left in the storm’s wake. Homes on both of the state’s coasts were flooded, the only road to a barrier island was destroyed, and a historic waterfront pier was destroyed.

Ian unleashed relentless wind gusts across Florida as the eyewall moved inland. The highest reported wind gust was 126 mph recorded by a NOAA station in Captiva/Redfish Pass, which is close to where Ian made landfall.

Aerial imagery showed just how destructive and powerful the wind was as Ian ripped through the area. In a video from Fort Myers, Florida, the boats that were once in harbors and marinas could be seen scattered across the town. AccuWeather National Reporter Bill Wadell said the boats looked like they were “tossed around like toys.”

“It was tremendous, it was devastating, it was sobering to see something like that,” Steve Smith, who found his boat in the middle of the mess left behind, told Wadell.

“We’ve lost all our boats. That’s the long and short of it,” Cookie Smith, Steve’s wife, told Wadell. “But we’re all safe and we just pray for those that had homes that were washed away.”

The shocking scenes of destruction hint at how sweeping and long-lasting the impact across Florida will be felt. The economic fallout caused by the storm will be immense, AccuWeather Founder and CEO Dr. Joel N. Myers said — on par with some of the worst hurricane damage in U.S. history.

According to Myers, the total losses caused by Hurricane Ian will amount to between $100 billion and $120 billion in the U.S. Hurricane Ian was rated a 5 on the AccuWeather RealImpact™ Scale for Hurricanes due to its potential for life-threatening storm surge and its powerful winds.

“Ian will go down as one of the most damaging and impactful storms in U.S. history, along with 2017’s Hurricanes Harvey, which caused $190 billion in total damage and economic loss,” Myers said. Other notorious storms Myers noted include Irma, which was blamed for $80 billion in losses in 2017, Sandy in 2012, which caused $210 billion in losses, and Katrina in 2005, which resulted in $320 billion in damages. Those figures have been adjusted for inflation.

Myers, who has been studying the economic impact of severe weather for over 50 years, said, “Our estimate largely accounts for damage to homes, businesses, medical facilities, roadways, and vehicles as well as power outages, which results in food spoilage and interruption to medical care.” The toll on Florida’s agriculture industry will be significant, too. Myers estimates “nearly $6 billion in crop losses, including damage to orange groves as well as grapefruit, soybeans, peanuts, cotton and other commodities.”

Another way Hurricane Ian’s path across Florida can be illustrated is with a 24-hour rainfall total map. The heaviest of the rain fell from Port Charlotte, on Florida’s west coast, to Ponce Inlet, on Florida’s east coast.

In just 24 hours, automated rain gauges reported as much as 31.52 inches of rain near Ponce Inlet while an amateur weather observer recorded 28.60 inches at New Smyrna Beach, which is just south of Ponce Inlet.

Rainfall totals combined with the ferocious storm surge wreaked havoc on barrier islands and areas close to the coast.

“I’ve been here 29 years and I’ve never experienced or seen anything like this,” longtime Florida resident Michele Reidy, who lives near Fort Myers, told AccuWeather. “Our families have lost everything … [there is] a boat sitting almost in our apartment. It’s all underwater.”

As the water receded on Thursday, a line was left behind on Reidy’s apartment wall, which shows how high the storm surge rose. Reidy estimated the storm surge was 6-to 8-feet tall in her apartment.

A section of the Sanibel Causeway, the only bridge that leads to Sanibel Island, collapsed on Wednesday night in the wake of Hurricane Ian. The island is a barrier island located just south of where Ian made landfall and is home to around 6,500 people. It is unclear how many people rode out the storm on the island or how long it will take until repairs can be made.

Aerial imagery released by NOAA showed the damage the causeway sustained. Officials planned to evaluate the rest of the bridge to determine if other sections are at risk of collapse.

South of Sanibel, the historic beachfront pier in Naples was destroyed by Ian’s wrath. A video feed from EarthCam showed people on the pier before the worst of the storm moved inland. By the time Ian made landfall, it was a much different scene on the pier. Water levels nearly submerged the pier and waves came crashing down on it before the Earthcam video went offline.

As of Friday morning, power outages had dropped below 2 million for the first time since Wednesday. According to PowerOutage.US, there were still more than 1.9 million customers without power in Florida. The bulk of the power outages centered on where Ian made landfall, with virtually every resident and business in the dark in Hardee County.

As authorities assess the damage caused by the storm, Biden pledged to support local and state officials, saying the federal government will cover the entire cost of clearing debris and rebuilding public buildings, such as schools. The government will also be providing support to people with damaged or destroyed homes.

Hurricane Ian made landfall as a strong Category 4 hurricane Wednesday afternoon on the barrier islands of southwestern Florida, just west of heavily populated Fort Myers. It crashed ashore on the Florida mainland — its second U.S. landfall — just south of Punta Gorda in Charlotte County later in the afternoon. Only four hurricanes on record have made landfall over the contiguous U.S. with maximum sustained winds greater than 155 mph.

«Previous Post
Raw, Miserable Weather Ahead For The Northeast Thanks To Ian»Next Post
Blast Of Winter-like Cold On The Way For Midwest, Northeast