Sebastian Fundora Fights Ocampo, But Keeps His Eye On The Big Prize

Sebastian Fundora stands tall. “The Towering Inferno” has established himself as one of the top junior middleweights in the world. He solidified that status with his “Fight of the Year” win against Erickson Lubin in April. The 6’6″, 154-pound Fundora (19-0-1) steps back in the ring on Oct. 8, live on Showtime in his second […] 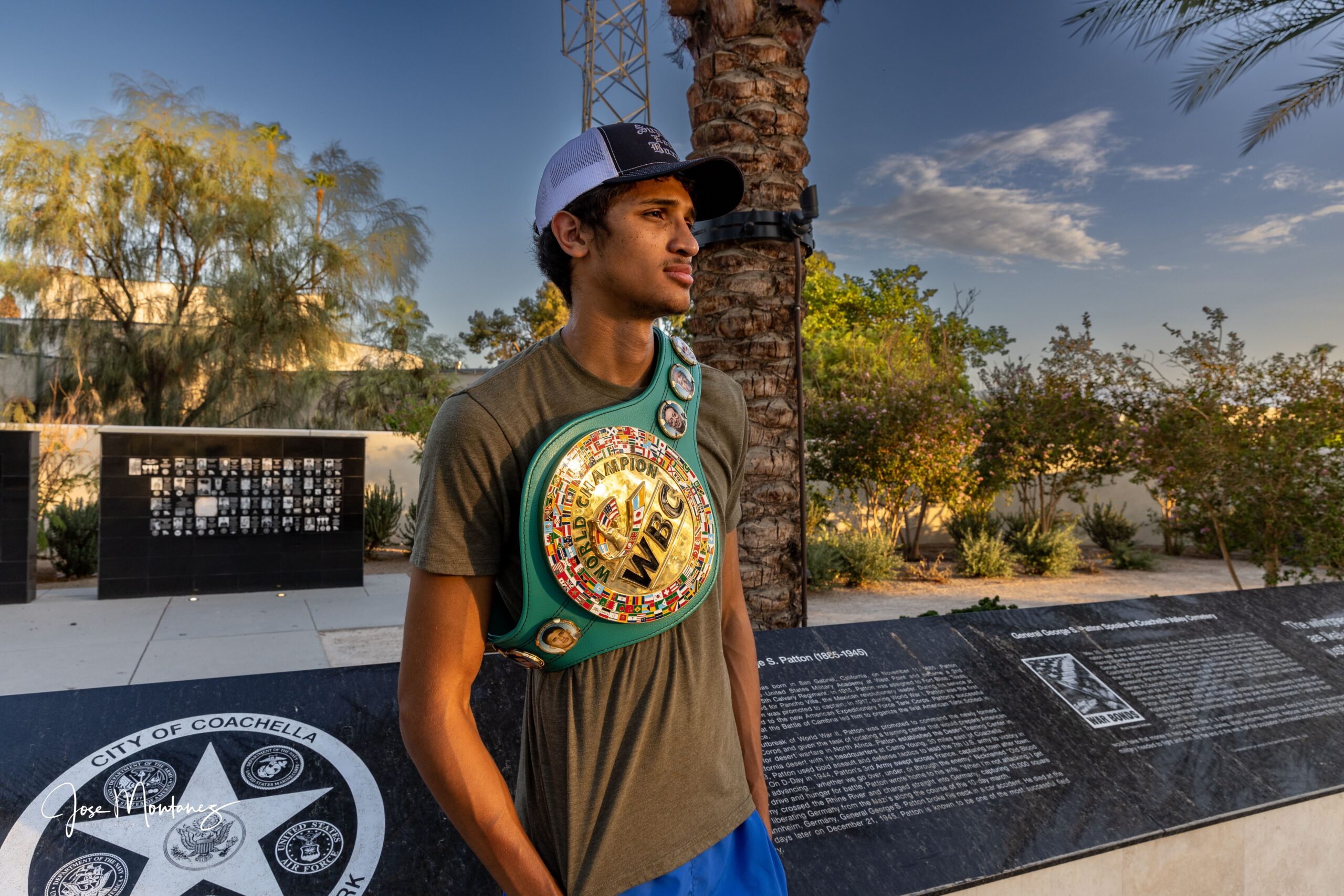 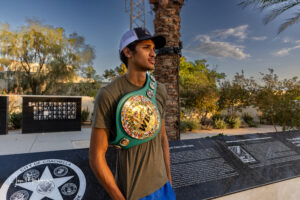 “The Towering Inferno” has established himself as one of the top junior middleweights in the world. He solidified that status with his “Fight of the Year” win against Erickson Lubin in April.

The 6’6″, 154-pound Fundora (19-0-1) steps back in the ring on Oct. 8, live on Showtime in his second consecutive headliner role, against Carlos Ocampo (34-1-0). Ocampo’s only loss comes at the hands of welterweight kingpin Errol Spence Jr. And Ocampo has won 12 consecutive fights since that setback.

Among boxing purists, Fundora’s high punch output and forward/aggressive style has made him a fan favorite. A win over Ocampo means Fundora puts himself in line to face the Jermell Charlo [unified champion] – Tim Tszyu winner in 2023.

Fundora talks to Zenger about the importance of staying busy and prepping for the future. 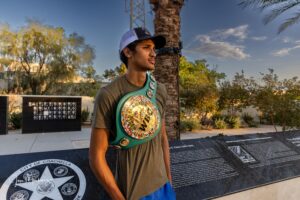 Sebastian Fundora poses with his WBC Interim Title, which he will defend on Showtime against Carlos Ocampo on Oct. 8. (Jose Montanez/Team Fundora).

Sebastian Fundora poses with his WBC Interim Title, which he will defend on Showtime against Carlos Ocampo on Oct. 8. (Jose Montanez/Team Fundora).

Zenger: Most would deem knocking out Erickson Lubin as your biggest win, or most impressive win to date. Any pressure to perform a certain way against Carlos Ocampo on Oct. 8, or do you just continue doing your thing?

Fundora: What I’m most concerned about with this fight is to maintain focus. I’m not overlooking Ocampo, but I want to continue to stay busy, so I can get that title shot.

Zenger: What did you learn about yourself during your battle with Lubin?

Fundora: I don’t think I learned anything. I just wanted to prove to the fans and everyone watching that I am a talented fighter, and someone to watch in the super welterweight division.

Zenger: Most will remember Ocampo for his only career loss to Errol Spence Jr. But since then, he has won 12 fights in a row and is currently on a three-fight knockout streak. I’m sure you are expecting the best version of Carlos Ocampo. 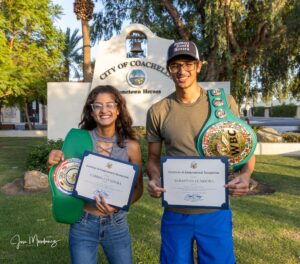 Sebastian and Gabriela Fundora prove boxing is a family affair. They will fight on the same card on Oct. 8.  (Jose Montanez/Team Fundora)

Fundora: Yes, of course. We expect a better Carlos Ocampo now that he’s had that mistake, that loss to Errol Spence. I’m sure he’s hungrier and more disciplined now. And that’s best for us because when a fighter is like that, it gives us the best fights. I let my dad watch film and listen to him. I don’t stay away from it, but that’s more my dad’s job. I work on what works for me and establish that during the fight.

Zenger: Oct. 8 will mark your 21st fight as a professional. Are you on par for where you thought you would be career-wise?

Fundora: I’m very satisfied with where I am. My father told me at 23-24 years old that we would be fighting in the higher ranks. We are there now. We have the WBC interim title; we are the WBC mandatory. I’m very comfortable where I’m at, I’m only 24, and the sky’s the limit.

Zenger: Your stature of being nearly 6’6″ and fighting at 154 pounds. The fact you’re a southpaw who throws a lot of punches are the keys to a successful career. But your calm demeanor will play a key role, too. What do you feel will eventually separate you from the rest of the division?

Fundora: I don’t know. I think the fact that I’m an exciting fighter. We definitely give a show for all the fans. I love boxing. I’m pretty sure all the other fighters love boxing, and we are just here to prove who’s better and show our love for the sport.

Zenger: I remember watching you when you were the first fight out on televised cards. What has it been like for you to be the headliner to these shows?

Fundora: It’s great! It’s a great feeling that I’m considered a main-event fighter now. It just shows that my hard work is paying off. My sister [Gabriela Fundora] is fighting on the card as well, so I’m very excited about that, too. It’s a family affair, with both of us fighting on it. We’re just happy to show off in front of the fans.

Sebastian and Gabriela Fundora prove boxing is a family affair. They will fight on the same card on Oct. 8.  (Jose Montanez/Team Fundora)

Zenger: Will you watch your sister’s fighter prior to going out and doing your thing? O would you prefer to not watch her, so it doesn’t psychologically impact what you have to do later in the evening?

Fundora: I have to watch my sister’s fight. I have been watching her in camp, put in the work, not seeing it would be bad for me. It’s like watching an entire movie and not knowing how it ends.

Zenger: Coming from a fighting family, with both you and your sister being fighters, and your father bring a trainer, is it boxing all the time? Or is there a separation there?

Fundora: The sport brings us closer, but if my dad wanted to separate the sport from the family, he can do it. It’s just our whole life. To separate it, it wouldn’t be us. I listen to my father as a son, and I listen to him as a boxer. I’m pretty sure my sister looks at it the same way … it’s just the way we do things.

Zenger: How imperative was it for you to fight again before the end of the year?

Fundora: Very important. I have to stay busy in this division. The talent is always coming up in this division. You never know who will be coming up next. We have this fight with the champ, [Jermell] Charlo and Tim Tszyu in January, so hopefully, we can have the fight after that.

Zenger: You showed us so much against Erickson Lubin. Anything we can expect to see from you in this fight?

Fundora: We’ll see what Carlos Ocampo presents, but we plan on putting on an exciting fight for you guys.

Zenger: How do you feel you stack up against the guys who are at the top of the division not named, Sebastian Fundora?

Fundora: We hope to become a champion in 2023. I know I can compete against all these guys, we just have to have the opportunity.