It damages leaves, changes flowering patterns and acts as a barrier to pollinators. Ozone can be both friend and foe. 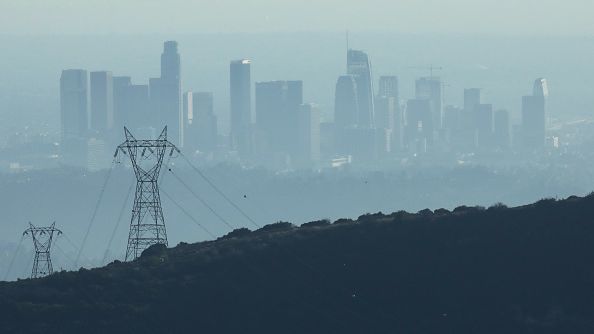 The buildings of downtown Los Angeles are partially obscured in the late afternoon on November 5, 2019 as seen from Pasadena, California. (Photo by Mario Tama/Getty Images)

Air pollution is preventing insects from sniffing out the crops and wildflowers that depend on them, according to new research.

Bees and butterflies pollinate plants when they go from flower to flower – boosting reproduction. This process has been interrupted by rising levels of ozone, impacting the survival of both fauna and flora.

Lead author Professor Evgenios Agathokleous, of Nanjing University of Information Science & Technology in China, said: “There is much noise about the direct effects of agrochemicals on pollinators, a subject of profound societal attention. But it now emerges that ozone is a silent threat to pollinators and thus pollination. These impacts of ozone have long been missed.”

Ozone forms naturally in the stratosphere 7.5 miles above sea level, and helps protect against harmful sun rays. But in the troposphere, the lowest region of the atmosphere, it damages Earth. The greenhouse gas is created by a photochemical reaction between volatile chemicals.

Levels have been increasing because a warming climate is creating optimal conditions for it to thrive.

Prof Agathokleous said: “Ozone pollution can affect the timing and duration of flowering in such a way the occurrence of flowering is asynchronous to the activities of pollinators.

“It can also change the color of flowers, disrupting the visual signals to pollinators. Ozone pollution can also directly react with pollen, decreasing its quality, but also indirectly changing the amount of pollen.”

When damaged, they have a hard time photosynthesizing and struggle to provide the plant with the energy it needs to grow.

Plants emit their own organic volatile compounds to facilitate communication between them – and alerting pollinators to the presence of a waiting flower.

Ozone pollution appears to be disrupting these chemical signatures.

Prof Agathokleous added: “Changes in the composition of the volatile blends could also have severe implications to pollinators because they might not recognize host plants and their qualities in the same way they did in the past.

A recent scientific review of insect numbers around the world suggested that 40% of species were undergoing “dramatic rates of decline.”

According to the World Health Organisation, air pollution accounts for an estimated 4.2 million deaths a year from stroke, heart disease, lung cancer and chronic respiratory diseases..