Raw, Miserable Weather Ahead For The Northeast Thanks To Ian

Ian will continue to unleash impacts as a tropical rainstorm hundreds of miles farther inland up. 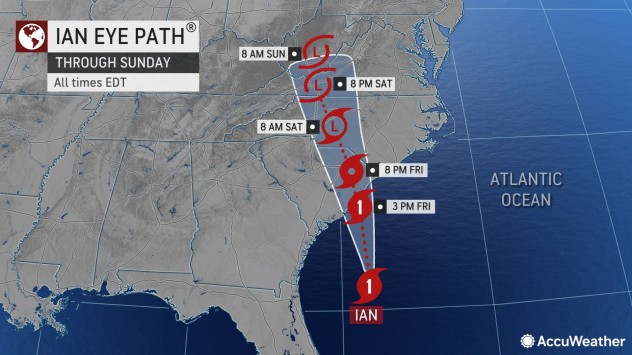 A general 2-4 inches of rain with locally higher amounts will fall from part of upstate South Carolina and northern and western North Carolina to much of Virginia, northeastern Tennessee, southeastern West Virginia and portions of Maryland and Delaware this weekend. Heavier rain, 4-8 inches with local amounts between 8 and 12 inches, will fall near the Carolina coast to the Virginia capes.

Long after Ian crashes ashore as a hurricane in South Carolina, Ian will continue to unleash impacts as a tropical rainstorm hundreds of miles farther inland up the spine of the Appalachians and into parts of the Northeast.

AccuWeather forecasters say that Ian will also play a role in the development of a new coastal storm that can prolong the effects and cause strong winds, above-normal tides, beach erosion and disruptive downpours, which will be accompanied by a notable chill in the air.

With all of those factors weighed in, AccuWeather meteorologists are expecting downright miserable and raw conditions that will persist from this weekend into early next week for some places in the Northeast.

“Ian was looking more like a powerful nor’easter on Friday with the heaviest rain and strongest winds already shifting to the north and northwest of the center,” AccuWeather Chief On-Air Meteorologist Bernie Rayno said on Friday as he pointed to maps, which showed Ian sprawling out with tropical-storm-force winds extending from near Norfolk, Virginia, to Jacksonville, Florida. “As the center of Ian moves inland [on Friday afternoon], heavy rain and localized flooding will occur hundreds of miles from the coast.”

A general 2-4 inches of rain with locally higher amounts will fall from part of upstate South Carolina and northern and western North Carolina to much of Virginia, northeastern Tennessee, southeastern West Virginia and portions of Maryland and Delaware this weekend. Heavier rain, 4-8 inches with local amounts between 8 and 12 inches, will fall near the Carolina coast to the Virginia capes.

Rainfall of this magnitude over a broad area will lead to quick rises along small streams and rising water levels along some of the major rivers.

Most of the wind energy from Ian will dissipate as Ian pushes a couple hundred miles inland from the Carolina coast. However, pockets of gusty winds capable of knocking down trees and triggering sporadic power outages can occur as far inland as West Virginia and as far to the north along the coast as New Jersey and Long Island, New York, due to interaction with an old frontal zone.

That same front, which will mark the boundary between dry air to the north and tropical moisture to the south, will lead to a secondary pulse of heavy rain in the mid-Atlantic region for a time this weekend. The northern edge of that drenching rain will reach New York City and the southern coast of New England, as well as portions of Pennsylvania and northern New Jersey. In these areas, there is the potential for incidents of urban flooding in areas that typically have flooding during episodes of drenching rain.

“The combination of a strong area of high pressure over northern New England and lingering low pressure associated with Ian will create stiff east to northeast winds in coastal areas of the Northeast, long after the tropical system moves inland,” AccuWeather Senior Meteorologist Joe Lundberg said.

“This action will lead to above-normal tides, coastal flooding, beach erosion and dangerous surf conditions from northeastern North Carolina to eastern Massachusetts,” Lundberg added. Areas prone to taking on water during wintertime nor’easters such as Wildwood, New Jersey, and Norfolk, Virginia, will likely experience similar conditions this weekend into the first half of next week.

Some of the energy left over from Ian over the central Appalachians late this weekend will transfer to the mid-Atlantic coast early next week. This transfer is likely to help spin up a brand new area of non-tropical low pressure just offshore.

The impacts of the new storm will be three-fold. One will be to prolong the above-normal tides and their impacts. Another will be to bring a second pulse of rain from portions of Virginia to southeastern New York state and southern New England. Additionally, winds may increase for a time as that new storm strengthens.

An area of high pressure sitting to the north will combine forces with the coastal storm, helping to funnel in high winds. Add that to the rainy conditions, and it will make for raw and chilly conditions for many days in the Northeast, especially where rain is pouring down this weekend to next week. AccuWeather RealFeel® Temperatures can dip into the 40s and even the 30s at times, a likely reminder to people who live in the region that Old Man Winter is not that far away.

Speaking of winter, a new dose of chilly air is brewing.

“We are tracking a new burst of chilly air that will arrive by next weekend in the Northeast,” AccuWeather Lead Long-Range Meteorologist Paul Pastelok said. “An Alberta clipper storm associated with that chilly push could trigger some snow in northern New England.”

Meanwhile, elsewhere in the tropics, AccuWeather’s long-range team will be monitoring a couple of new candidates that could become the next named systems in the Atlantic. One such disturbance is projected to enter the Caribbean during the second weekend of October and will be watched for development shortly thereafter. The next two names on the list of tropical storms for the 2022 season are Julia and Karl.

Meanwhile, well to the south of where relentless stormy weather associated with Ian and the secondary storm will set up, people picking up the pieces in devastated areas of Florida will experience mainly dry and warm conditions into the first week of October.

The combination of warmth and sunshine may assist with recovery and cleanup operations in Florida, but these conditions can be hard on some individuals struggling with the lack of electricity and without a means to keep cool.