15 Years Later: Looking Back At Hurricane Charley, The First In A ‘nightmare’ Hurricane Season For Florida

Fifteen years ago, destructive Hurricane Charley made landfall as a powerful Category 4 hurricane along the Florida Gulf coastline 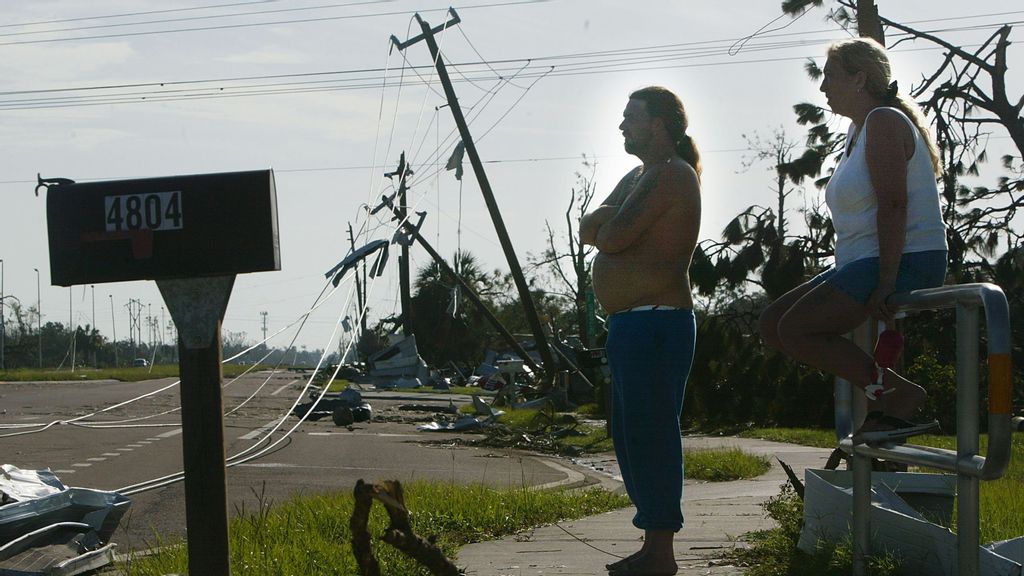 Cindi Norris (R) and Frank Jones survey the scene near their mobile home where they took cover when Hurricane Charley struck in the Pine Acres mobile home community August 15, 2004 in Punta Gorda, Florida. Hurricane Charley destroyed most of the mobile homes in the area but left theirs largely intact. (Photo by Mario Tama/Getty Images)

Fifteen years ago, destructive Hurricane Charley made landfall as a powerful Category 4 hurricane along the Florida Gulf coastline on Aug. 13, 2004.

Charley was the first in a series of storms that hit the Florida coast in the 2004 season. AccuWeather Senior Meteorologist and Hurricane Expert Dan Kottlowski described the year as a “nightmare” for the state in terms of tropical storms.

The storm began in the Caribbean and moved northward toward Cuba. The initial thought was that it would weaken over Cuba, but it instead tracked west, Kottlowski said.

The storm was initially expected to make landfall in the highly populated Tampa Bay area, but a last-minute shift in the track caused the center of the storm to make landfall farther south near Charlotte Harbor.

This last-minute shift in the track caught many locals off guard. While the damage could have been much worse, the storm wreaked havoc in several Florida cities, including Fort Myers, Punta Gorda and Orlando.

Not only did the storm’s direction abruptly change, but the storm also rapidly intensified, strengthening from a weak Category 1 hurricane to a powerful Category 4 hurricane in only a few hours, Kottlowski said.

“Charley was a small but very powerful hurricane. The wind field around the hurricane was fairly small with hurricane-force winds not more than 25 to 35 miles out from the center,” Kottlowski said.

Once making landfall, the storm unleashed an array of extreme weather impacts. Several tornadoes touched down, wind gusts up to 140 mph caused significant damage and heavy rainfall sparked flooding. In all, Charley spawned nine tornadoes in Florida, five in North Carolina and two in southeastern Virginia.

The powerful winds were the biggest threat to the cities, causing most of the destruction. The winds knocked down power lines, trees, traffic lights and signage throughout the cities. Many of the cities’ residents lost part, if not all, of their homes, and some even lost their lives. Charley was directly responsible for at least 10 deaths in the U.S. It is estimated to have caused approximately $17 billion in damages.

“The hurricane acted more like a large tornado,” Kottlowski said.

“The tightly wrapped-up wind pattern around the storm allowed it to remain a hurricane as it tracked northeast and through the Orlando area during the evening of August 13th.”

Charley caused considerable wind damage to the Punta Gorda and northern Fort Myers area before tracking straight toward Orlando, where it caused a 25- to 50-mile-wide path of wind damage all the way to Daytona Beach along Florida’s east coast.

Because Charley moved so swiftly over Florida, the storm never had time to weaken to a tropical storm. Charley remained a Category 1 hurricane when it exited the state over New Smyrna Beach and back out over the Atlantic Ocean.

After moving out of Florida into the Atlantic Ocean, the hurricane re-strengthened slightly as it accelerated toward the coast of South Carolina. This re-intensification was temporary. Charley came ashore again near Cape Romain, South Carolina, on Aug. 14, 2004, as a weakening hurricane. It continued to cause damage as it moved up the eastern U.S.

The extensive storm damage led the World Meteorological Organization (WMO) to retire the name Charley in 2005. When a hurricane causes extreme damage or loss of life, the WMO removes the name from the rotating list of names used for Atlantic storms.

After Hurricane Charley ravaged the state, Florida was hit with three more hurricanes in the 2004 season: Frances, Ivan and Jeanne. All three of these storms struck during the month of September.

Damage from Charley remained when the subsequent storms hit. Roofers were not able to repair every damaged home in time for the next three storms that moved through the state. News reports emerged that captured hundreds of homes covered by blue tarps to keep the rain from causing further damage. Some homes had blue tarps over them well into the following year, Kottlowski said.