Meloni’s victory suggests she was successful to convince voters that she offered a new face of conservatism for Italy. 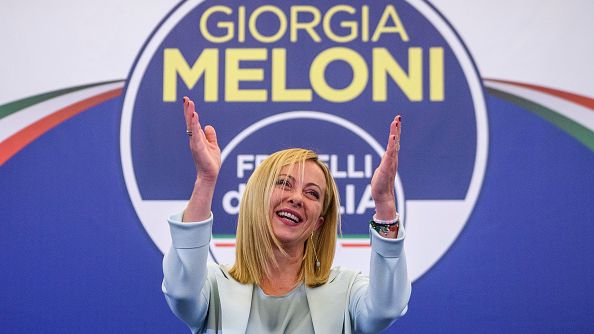 ROME, ITALY - SEPTEMBER 25: Giorgia Meloni, leader of the Fratelli d'Italia (Brothers of Italy) gestures during a press conference at the party electoral headquarters overnight, on September 25, 2022 in Rome, Italy. The snap election was triggered by the resignation of Prime Minister Mario Draghi in July, following the collapse of his big-tent coalition of leftist, right-wing and centrist parties. (Photo by Antonio Masiello/Getty Images)

“Italians chose us, and we will not betray it, as we never have,” she said in a public appearance in the early hours of Monday morning.

While some consider the party to be “far right” due to their ties to neo-Fascist groups formed in Italy after World War II, Meloni herself shrugs off the label as a smear and seems keen to break with some aspects of the party’s past.

Meloni’s victory suggests she was successful in her effort to convince voters that she offered a new face of conservatism for Italy. She has sought to present a different world view than that of other conservative parties in Italy notably Matteo Salvini’s League and Silvio Berlusconi’s Forza Italia.

When Meloni spoke at the Conservative Political Action Conference in Orlando, Florida earlier this year, she cast herself as a conservative populist, and her electoral campaign this summer placed great emphasis on her identity as both a Christian and a mother.

“She has some support in certain areas of the south to be sure. Finishing her campaign here was symbolic and a way to differentiate her from other candidates”, said Francesco Senese of the provincial bureau of Naples for the Democratic Party in an interview with Zenger News.

Senese said that Meloni “needs to build a stronger relationship with the south”.

Exit polls showed a lower turnout than Italy’s previous elections. A number of factors played into low poll numbers including apathy and other conditions including fierce rainstorms over much of southern Italy.

“I didn’t vote, I had work as well,” said Angelo De Filipi who stood outside the famed Naples Pizzeria Starita waiting for a table in the light rain, “but, me and my friends, we don’t want Giorgia”.

Meloni holds a number of anti-immigrant and eurocritical views, yet, some of her views have changed over time. A former admirer of Russian President Vladmir Putin who praised his 2018 election victory she has now become a critic of Russia’s war in Ukraine and pledged continued support for Ukraine.

“I haven’t been following it closely” says Ayaz Muhammad, an immigrant from Pakistan who manned a small shop not far from Garabaldi Station in Naples. He said he was aware of Meloni’s visit to the city, but, seemed little concerned with her hawkish views on immigration.

“All people have a good side, sometimes you have to wait to see it”, said Muhammad as rain poured steadily on the election night and some soft Punjabi music emanated from his phone.