The videos that surfaced online have had an extraordinary impact on everyone in the country following the storm’s destruction. 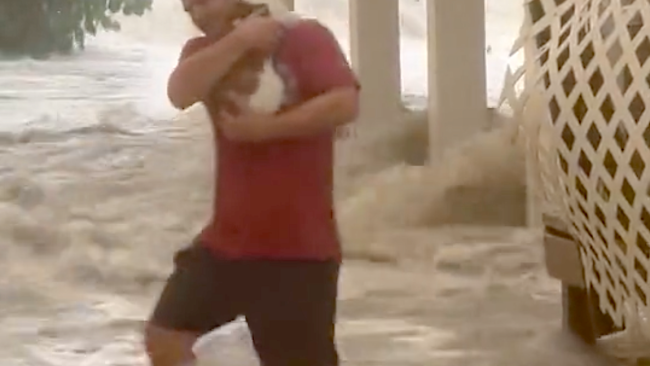 When it stormed across Florida on Wednesday, Hurricane Ian made an extraordinary impact on the state, and some of the videos that surfaced online have had an equally extraordinary impact on those everywhere around the country following the storm’s destructive path. These videos stand as a testament to what those faced with a terrifying hurricane went through and show a range of dramatic events, including people rescuing people, a person rescuing an animal and the tremendous damage caused by the storm.

A video of a man rescuing a cat during Hurricane Ian’s pass through the west coast of Florida on Wednesday racked up more than 173,000 likes and 18,000 retweets in less than 24 hours – and it’s easy to see why. Megan Cruz Scavo of Naples tweeted the video of her boyfriend walking against the storm winds to reach over to a cat that had been left without shelter amid rapidly-rising storm surge waters.

The video went viral for the right reasons as he became the hero of the day. The comments were flooded by over 8,000 Twitter users thanking him for his actions, blessing him for looking out for the stray animals during these dangerous times for everyone and congratulating Scavo for having such a “good dude” by her side.

Scavo then tweeted an “Update on #HurricaneIan cat” to keep her followers up to date on what was next for her, her boyfriend and the new member of her family.

Update on #HurricaneIan cat: He made it through (almost lost him to storm surge) & we are keeping him and naming him Ian

The Australian news program Sunrise was in the middle of a live broadcast from Naples, Florida, on Wednesday when the newscast took an unexpected turn. The video feed showed a reporter in Florida with a flooded road in the background when suddenly the cameraman dropped the camera and ran into the floodwaters. The man behind the camera saw a family trying to traverse the high waters with children, a dog, and cases of water and stepped in to help.

In Bonita Springs, a man in his car was trapped in several feet of floodwater on Wednesday. Five good Samaritans teamed up and jumped in together to save him, and it was all caught on video.

While two of the good Samaritans carry him out of the completely trapped car, two others can be seen staying behind trying to save the man’s most important belongings from getting lost in the water stream.

In Fort Myers, Instagram user @malsmarie posted a video showing Ian’s destruction of what was her house.

“That was my house. My house is gone,” she said on the video while pointing from a balcony to the fallen-down roof and walls that made up her deck and home. The video also shows the torn-apart walls, the flooding at the bottom of the stairs of her grandparents’ home, located just a couple of houses down from hers.

A video from the Tampa Police Department shows some of the city’s damage during the storm, including a traffic light crashing to the ground after being tossed around by Ian’s winds, fallen trees blocking a house’s entrance, as well as leaves, branches, and tree trunks littering the streets.

Tampa PD posted the video on Twitter as a visual example of why officials had urged people to “Stay Off The Roads.”

“TampaPD officers saw a traffic light come crashing down in front of their car in #YborCity. There are live wires down. This is NOT the time to venture out,” the tweet warned.

In Naples, a group of firefighters saved a truck swamped by Ian’s floodwaters on Wednesday. The chief of the Naples-Fire Rescue station said the crew had to take action because “it seemed like the truck was going to catch on fire. It was smoking, and we didn’t want the station to burn down.”

The team had to unload the equipment that was in the truck as water rushed in to save what they could.

Extreme Meteorologist Reed Timmer, a storm chaser for AccuWeather, captured footage of the eyewall on Pine Island, a southwestern Florida barrier island not far from where landfall occurred. The video captured the wind blowing the palm trees in all directions, with not much visibility other than the incoming storm rain rushing in circles.

Timmer points out “the systematic water rise and the lower pressure of the hurricane” as signs of the eye’s arrival. When he is finally inside the eye of the hurricane, Timmer recorded the circle that opened up above him with a clear, blue sky view. He can be heard yelling, “There’s the eye!” and “Blue skies!” as he also points out Dominator Fore, his storm-chasing vehicle, struggling in the storm surge.