Hurricanes In 100 Years Could Be Far More Devastating, Study Finds

Our understanding of hurricane formations has changed dramatically, but what do we know about the next century of storms? 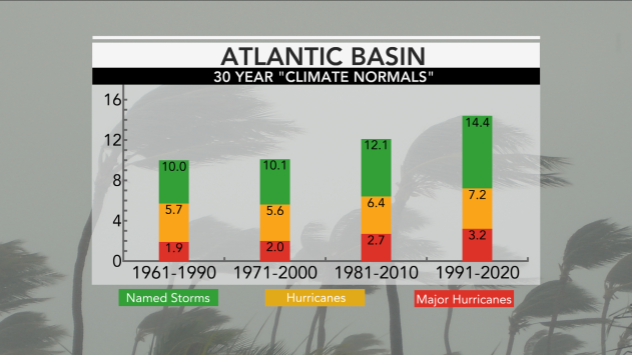 Our understanding of hurricane formations and tracks has changed dramatically in the past century, but what do we know about the next century of storms?

A team of climate scientists from Rowan University in New Jersey set out to answer that question, using more than 35,000 computer simulations to study the evolution of storm tracks and better understand storm behaviors in the future. The scientists’ findings were particularly concerning for one specific region of the United States.

Dr. Andra Garner, the study’s lead researcher, told AccuWeather the climate models she used to analyze storm behavior evolution show that storm systems will only become more unforgiving in the decades to come.

“A couple of key things we found were that, over time, hurricanes seem like they’re forming closer to the U.S. southeast coast, which means less time for those northeast cities to prepare for those storms to arrive,” she told AccuWeather. “The other thing that happens is that over time, we see hurricanes moving their slowest when they’re along the U.S. East Coast, which means that those communities being impacted by them see a longer duration of the storm impacts.”

Garner said her team was motivated for years to study specifically the future of hurricane-influenced flooding in New York City. This was long before Ida, which had transitioned from a hurricane at landfall on the Gulf Coast to a tropical rainstorm as it traveled north, tearing through the eastern U.S. and New York City in August and September 2021.

In a future high-emissions scenario, as used by the study, the output of greenhouse gases caused by the heavy use of fossil fuels continues to add additional warming to the climate.

Although Garner said her team’s initial motivations were to study the future tropical impacts on New York City, the findings revealed that a few East Coast cities should also be concerned.

“As the climate warms, TCs also form closer to the U.S. southeast coast, reach their slowest forward speed along the U.S. Atlantic coast and persist farther north and east in the Atlantic basin,” the study said. “The time required for TCs to reach cities such as Boston, Norfolk and New York City is reduced, and the typical duration of TC conditions increases at each of these locations.”

It may soon be time for those in the Northeast to call up their Gulf Coast friends and family to ask for some safety tips. However, the future changes will require more adaptations than simply boarding up windows and filling sandbags.

Garner said her findings should also influence the way these East Coast cities plan for the future. Simply put, the current setup may not fly.

“We’re really living in a society that has been developed and adapted for a climate state that maybe is no longer the case, and we’re now dealing with this rapidly changing climate,” she said, adding that tropical systems like Hurricane Ida showed just how hard it is to prepare for something people haven’t seen before. “I think it’s definitely something we need to be thinking about – How we can adapt our communities?”

As Ida painfully highlighted in August and September, rethinking community infrastructure is a matter of life or death.

For cities like New York and Philadelphia, where flooded-ravaged subways and buildings turned into death traps from Ida’s intense rainfall, Garner said her study’s findings should send a clear message about the urgency of beefing up coastal infrastructure ahead of these future storms.

“We need to be thinking about that now and coming up with ways that we can make those communities more resilient,” she said. “Protecting against things like sea-level rise and storm surge, updating our infrastructure like with some of the problems we consistently see in New York City with the subways flooding and things like that. We need to be thinking about those kinds of issues.”

On top of simply forecasting the future with her simulation models, Garner said, her research shows how we’ve already seen great changes from the pre-industrial era to the present.

“We absolutely need to be taking those steps now to try to make our communities more resilient and able to handle those kinds of impacts.”

Rather than curving into the Big Apple, she said, the models show storms lingering out at sea and presenting bigger worries for cities like Boston. On top of that, she continued, her team was also surprised not only by the destination of these storms but also by the areas of formation and the speed of trajectory.

According to Garner, the study found storms moving along the East Coast are likely to slow down, or even stall, in their forward progress, allowing even heavier loads of tropical rain and storm surge to inundate communities.

The researcher also told AccuWeather that the study focused mainly on the evolution of tropical cyclone tracks and not any changes to the intensity of those future storms, changes in the frequency of those storms or the distribution of storms between hurricanes and tropical storms.

However, she did add that their findings could signal danger to the projected cities like Norfolk and Boston because of how near the storms could form to the U.S. coast.

“The proportion of storms forming farther west and closer to our coastline seems to be increasing and the number of storms we have forming there is going up,” she said. “I think it needs to be a warning to us to be ready to, perhaps, prepare more quickly and have those warning systems in place and good communication in the event that a storm does develop near our coast.”

All confidence in a safe future doesn’t need to be cast away, however. Although the data may seem full of despair, the hope lies in an altered scenario.

According to Garner, the future studies simulations were conducted using a “very high future emissions scenario.” In the decades to come, she said, communities need to work to lower greenhouse gas emissions so that we can limit how bad the impacts of the storms become in the future.

“I always like to remind people that I think there’s a lot of hope for the future too,” she said, striking an optimistic tone. “We know that we are the cause of climate change. We didn’t get a chance to look at lower emission scenarios, but I think there’s a good chance that if we did look at those lower emission scenarios, perhaps we see less drastic changes in storms. That’s something we should all be working towards, working to take those larger-scale actions to lower our emissions so that we can avoid some of the worst-case future scenarios.”