Hurricane Ian slammed into Florida Wednesday afternoon as one of the strongest on record to ever hit the United States. 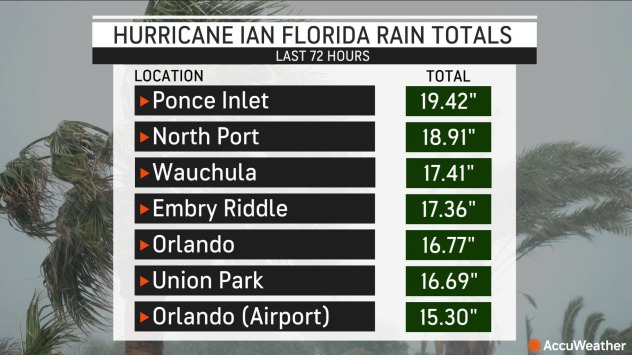 In just 24 hours, a weather station in Orlando measured 16.77 inches of rain, nearly three times the typical September rainfall of 6.37 inches. Preliminary weather data from Orlando International Airport shows that the monthly rainfall total is at 22.45 inches, which would make this September the wettest month in city history.

Hurricane Ian slammed into Florida Wednesday afternoon as one of the strongest hurricanes on record to ever hit the United States. The trail of destruction the massive hurricane left behind was just beginning to become clear as the sun rose on Thursday.

Bridges were destroyed, homes were wiped out by the ferocious storm surge and millions remained without power — enough to prompt President Joe Biden to enact federal disaster aid.

The Volusia County Sheriff’s Office confirmed on Thursday morning that a 72-year-old man died of an apparent drowning during the overnight hours into Thursday. The victim went outside his home in the city of Deltona, roughly 25 miles northeast of Orlando, to drain his pool during Ian’s approach when he apparently fell into a flooded canal, the sheriff’s office said.

Deputies responded to a home on Poinciana Lane near Lake Bethel around 1 a.m. after the victim’s wife reported that he had disappeared after heading outside. While searching for him, deputies found his flashlight, then spotted the victim unresponsive in a canal behind the home, officials said in a statement.

“The initial investigation indicates the victim was using a hose to drain the pool down a hill and into a 30-foot-wide canal, where a steep decline into the water was extremely soft and slippery due to the heavy rain,” .

«Previous Post
Orlene To Become A Hurricane, Increase Flooding Concerns In Western Mexico»Next Post
How To Use A Generator Safely After A Hurricane Strikes