What’s It Like To Get Taken Down By Tom Hardy?

The fight organizer said the actor won rapid victories in all of them in order to be crowned champion of his section. 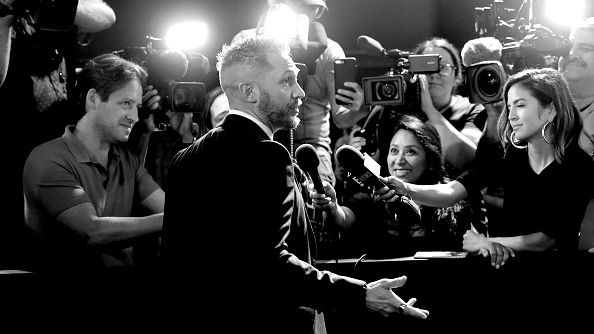 Tom Hardy arrives at the premiere of Columbia Pictures' Venom at the Village Theatre on October 1, 2018 in Los Angeles, California. (Photo by Kevin Winter/Getty Images)

Tom Hardy was seen in a footage taking down an opponent in a martial arts championship – before going onto win gold.

The video shows the star, dressed in blue robes, grappling with fellow Brazilian Jiu-Jitsu fighter Gavin Marsh at an event he secretly entered in a school sports hall.

During the clip, the tough actor manages to hook his arm around his opponent’s neck – and within just 20 seconds, he’s declared the winner by submission.

And the action hero – who holds a high-level blue belt in the ground-fighting combat sport – was declared the champion of his section after beating all-comers.

Sean Rosborough, 37, who sponsored the event, said “he (Hardy) was brilliant” with fans who approached him for photographs” while adding that the mums in the audience were “all over him”.

“And when he was fighting, he was focused on what he was doing. He’s amazing at Jiu-Jitsu.”

Hardy reportedly got into Brazilian Jiu-Jitsu when he trained for the film “Warrior” where he played the part of a former boxer who trains to become an MMA fighter.

Dad Andy Leatherland, 42, a sales manager and blue belt who lost to Tom in the championship final, said: “I knew he fought in the last competition locally and won two golds, and I knew at that point that I fitted into his category – I was the same age, belt and weight as him.

The dad-of-one said: “When they put the bracket out the day before, I could see that I would only meet him if it went to a bronze level match or if I saw him in the final. And on the day, he won his first and second match, so I ended up meeting him in the final”.

Sean, who watched each of Hardy’s fights, said the actor won rapid victories in all of them in order to be crowned champion of his section.

He said: “We tried not to bother him too much. We didn’t pap him to bits. We just tried to keep it as normal as possible for him. I think he had a good time.”

Hardy most recently starred as Alfie Solomons in the final season of hit series Peaky Blinders.

He is expected to soon reprise his role as Eddie Brock in the superhero movie Venom, currently in pre-production.