The Man Worked As A Boyfriend For Hire

A man was a boyfriend for hire – earning money posing as a plus one to stop men and women being hassled on nights out. 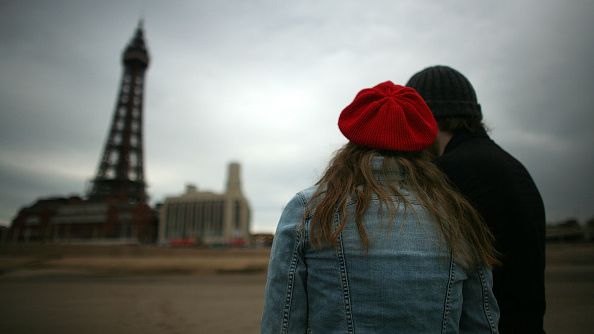 A young couple stroll on Blackpool's beach on May 14, 2009 in Blackpool, England. (Photo by Christopher Furlong/Getty Images)

Niuhi Von Nida, 33, set up his business after being asked by a pal if he would pretend to be her boyfriend when she was being harassed on a night out.

Soon the word spread, and he wouldd charge a flat rate of $30 for two hours – with overtime at $10 an hour – to be the perfect boyfriend.

There was no romance involved – and his duties would involve looking after drinks, making sure his clients weren’t hassled, or even walking them to their taxis.

He’d also simply pose as their boyfriend to ward off any unwanted attention.

Niuhi, originally from Hawaii but now living in Edwardsville, Illinois ran the unique business for 3 years between the ages of 23-26 while studying at college.

He even had business cards made advertising his unusual business.

Niuhi, who describes himself as queer, said he saw himself as more of a bodyguard due to the fact there was no romantic aspect involved.

“What they were paying for was safety, and the ability to have a fun night out without being harassed”, he said.

“Usually I would have to butch up my voice, and if anyone would approach them I’d interject. Sometimes guys would hit on them and I’d step in and say ‘hey babe, you okay?’ and she’d say ‘this is my boyfriend’ and the guy would walk away”.

He would meet up with clients beforehand and then go to a bar of their choice, as well as seeing them to a taxi afterwards.

Niuhi was single at the time, but now he has a partner.

“It was just through word of mouth [I got clients]”, he said.

He recalled one booking where a client he was with met someone on the night out who she wanted to go home with.

Niuhi’s aftercare remained top-notch, checking in with the woman the next day to make sure everything was okay.

Niuhi said altercations were rare, but he would always step in if needed.

Despite the quirky job helping to support his studies whilst at college, Niuhi admits he wishes his services had never been needed.

“It was a job that I never should have had, but people needed it”, he said, adding: “I think it’s still necessary, which is sad to me”.

“I think it’s disgusting that people think they have a right to tramp on people’s boundaries, just because they think they’re attractive”.

Now working as a court clerk, Niuhi has three key aspects for anyone planning to give the ‘rent-a-boyfriend’ job a go.

“Respect for clients, be professional and remember you’re there to protect them, not go on a real date,” he said.

«Previous Post
Ray Charles Jr. Pays Tribute To His Father And Those Impacted By 9/11 »Next Post
Teenager Becomes The UK’s Youngest HGV Driver