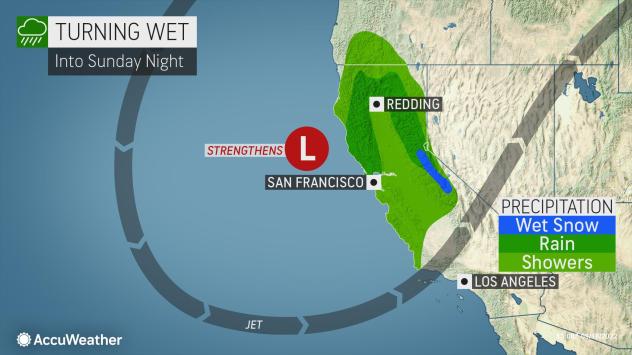 Meanwhile, this storm will allow for a dip in the jet stream, lowering the temperatures both at the surface and in the upper atmosphere. With this growing pocket of cold air aloft, this may be enough to produce the season's first snow at the highest mountain elevations, generally above 8,000 feet.

While Southern California has been on the receiving end of multiple rounds of rain in recent days and weeks, continued dry weather in the northern two-thirds of the state has led to persistent drought conditions, as well as numerous wildfires. However, AccuWeather forecasters say a potent storm system will stall offshore for a couple days and allow for a steady soaking rain in Northern California. For a select few areas at high elevations, a bit of wet snow may even be possible.

The culprit is an area of low pressure over the Pacific Ocean, which has been slowly strengthening in recent days. As this low pressure system gradually moves inland during the first few days of the week, it will bring moist Pacific air inland with it, providing the ingredients necessary for widespread rain for much of the Golden State.

“In Central and Northern California, rainfall may be heavy at times. On top of that, it should be a slow-moving feature, with rain lasting for a prolonged period of time in many areas,” AccuWeather Senior Meteorologist Mike LeSeney explained.

Meanwhile, this storm will allow for a dip in the jet stream, lowering the temperatures both at the surface and in the upper atmosphere. With this growing pocket of cold air aloft, this may be enough to produce the season’s first snow at the highest mountain elevations, generally above 8,000 feet.

“Snowfall will be confined to the highest elevations of the Sierra Nevada, but roads may become slushy or snow covered through the high passes, like Carson Pass along California State Route 88, Monday night,” LeSeney said, noting that road accumulations were most likely during the overnight and early morning hours.

Into Sunday night, with the storm still lingering just offshore, the steadiest and heaviest rain will likely be found in coastal areas. Residents in cities such as San Francisco, Monterey, and Santa Maria, California, should plan for periods of rain.

Farther inland, cities such as Redding and Fresno, California, should have more intermittent showers, especially toward the afternoon and evening hours. Later Sunday night, rain and high-elevation snow may reach the Sierra.

From Monday onward, the area of heaviest precipitation is expected to shift eastward. While light rain will still fall near the coast and in the Central Valley, heavy rain will be most likely in the Sierra and nearby foothills during this time. With such wet weather in the forecast, those looking to spend time outdoors in Yosemite National Park are likely to face substantial disruptions during this time.

Whether or not this system pulls down enough cold air to produce snow through the Sierra Nevada, a few days of much-needed rain are expected in California, something that could be considered as welcome news for many. According to the United States Drought Monitor, nearly 100 percent of the state is experiencing at least severe drought conditions as of Sept. 15.

The ongoing drought was recently exacerbated by a historic heat wave earlier this month across California, which brought the highest temperature in recorded history to downtown Sacramento, while setting new September records in cities such as Fresno, Ukiah and Merced.

The rain could also greatly benefit firefighting efforts across the state. Earlier this past week, the Mosquito Fire, which is burning northeast of Sacramento in El Dorado and Placer counties, became the largest wildfire so far this year in California. As of Sunday, Sept. 18, the fire has scorched more than 73,000 acres.

So far in 2022, more than 6,400 wildfires have burned over 359,000 acres in the state, according to the California Department of Forestry and Fire Protection.

Rainfall totals are expected to vary sharply from location to location; however, it is expected to be beneficial regardless across the northern two-thirds of California. The heaviest rain is expected to fall in the Sierra, as well as northern portions of the Coastal Range. In these regions, rainfall totals of over an inch will likely be widespread, with 2 to 4 inches of rain expected in places where the sloped terrain favors the heaviest rainfall. For these areas, there is an AccuWeather Local StormMax™ of 6 inches.

While flooding is not expected to be a widespread threat from this storm, the wettest mountain regions may need to be on the lookout for high water in spots. Not only will the heaviest rainfall here, but any runoff can easily funnel into narrow valleys and streams, causing water levels to rise rapidly. Additionally, those living on hilly terrain will want to be aware of the threat of mudslides, such as those that occurred in Southern California earlier this month. Fortunately, the areas that received heavy rain and wind from the former Hurricane Kay will avoid this storm’s rainfall.

This storm is a bit early in the season, as winter is typically the wettest time of the year across much of California. The storm track often carries in rich moisture from the Pacific Ocean, enhancing rainfall and making for more frequent rounds of precipitation.

Behind this storm, unusually warm conditions will develop once again as strong high pressure returns to the West. Some of the same parts of California that broke all-time temperature records to start September could even approach daily record highs to end the month.