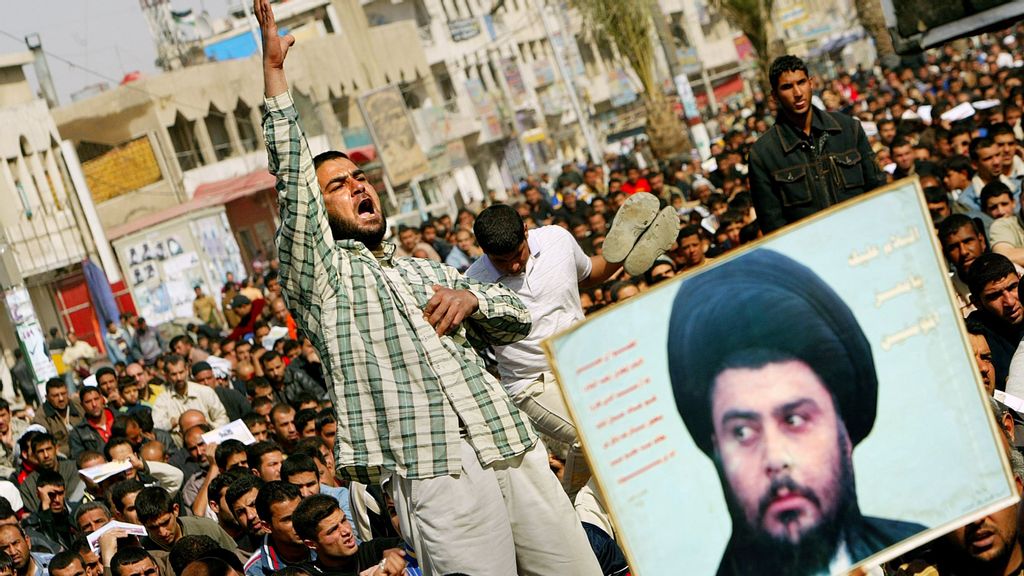 An Iraqi supporter of radical Shiite cleric Moqtada al-Sadr shouts during Friday prayer service on February 6, 2009 in the Sadr city district of Baghdad, Iraq after the Sadrists received only 9% of the vote in Baghdad. (Photo by Wathiq Khuzaie/Getty Images)

Inside the Green Zone, Baghdad activated its missile-defense system to destroy incoming rockets and artillery rounds last night as political parties vied for government buildings in the Iraqi capital, according to the U.S. embassy in Baghdad.

The C-RAM missile defense system can fire up to 4,500 rounds per minute to tear apart incoming rockets and shells.

A White House spokesman denied that U.S. diplomats are being evacuated from Baghdad, following brutal battles between Iraqi police and protesters in the presidential palace and across the Green Zone on August 29.

Video posted on social media showed Americans boarding a rooftop helicopter that reminded some online observers of the desperate U.S. evacuation from Saigon in 1975. Others referenced America’s sudden withdrawal from Kabul a little more than a year ago. This prompted the false internet meme that U.S. personnel were being evacuated from the Iraqi capital.

The Baghdad protests appear to be touched off by Muqtada al-Sadr, an influential Shia leader who was frequently at odds with U.S. forces from 2003 to 2011. These days, he’s busy tormenting the leaders of rival political parties in Iraq’s fragile constitutional republic.

The violence began when al-Sadr announced in a tweet, after morning prayers on August 29, that he is retiring from politics and shuttering all of his party’s offices.

The move comes almost eleven months after al-Sadr’s party, the Sadrist Bloc, won the majority of parliamentary elections but not enough to obtain a majority government. Since al-Sadr refused to accommodate robust Shia rivals closely allied to Iran, no government was formed, leaving the country in political limbo and turmoil.

Late in the afternoon, al-Sadr announced a hunger strike and demanded that all police and paramilitary forces put down their weapons.

As the sun set in Baghdad, Iraqis debated al-Sadr’s motives and plans.

“The dangerous developments that took place in our dear Iraq today, from the demonstrators storming the Green Zone and entering government institutions, point to the seriousness of the consequences of continuing and accumulating political differences,” said interim-prime minister Kadhimi, who signed off as the “Commander-in-Chief,” in a statement issued to Zenger. “While we affirm that the demonstrators’ bypassing state institutions is a condemned act and outside the legal contexts, we call on His Eminence Sayyid Muqtada al-Sadr, who has always supported the state and emphasized keenness on its prestige and respect for the security forces to help call on the demonstrators to withdraw from government institutions.”

Yet this is not the first time al-Sadr has made bold proclamations about dissolving parliament, disbanding militias loyal to him, and stepping out of the political spotlight. Al-Sadr’s latest statement is thus viewed by many Iraqis as a struggle for power that could plunge the country into civil war.

“Sadr will not leave. He is playing the game to pressure the parliament (for another election) to get more positions. It is all a political move to achieve his aims,” said Enas Ibrahim, an independent Baghdad-based journalist. “He has done in the past. But there is more pressure this time. Now, there is a curfew, and residents are scared and running toward the markets to stockpile foods.”

Ali al-Tabari, a Baghdad federal policeman, also lamented this as another Sadr “method” of sending his militia out under the guise of being “protesters” to push for “more power,” rebuffing the idea that the cleric will leave political life for good.

For almost two decades, Sadr has stood as one of the country’s most influential figures in all aspects of political, military, and religious life. His power is drawn mainly from a poor, grassroots adherence, and his armed wing – formerly known as the Mahdi militia – was prevalent in fighting American troops after the 2003 invasion.

While no ally to the United States, Sadr, in recent years, has also taken up profoundly nationalistic rhetoric critical of neighboring Iran and its meddling in Iraq. It marks a remarkable departure from his early years under the dictatorship of Sunni Saddam Hussein, when powerful Shia leaders banded together and were branded enemies of the state. Sadr came of age at a time when his late father, Grand Ayatollah Sayyid Muhammad Muhammad-Sadiq al-Sadr, forged close ties with Iran’s counterparts and proxies – including Sayyed Abbas Al-Musawi, the founder of Hezbollah, who was Sayyid’s student in the holy Iraqi city of Najaf.

Behnam Ben Taleblu, a senior fellow at the Washington D.C.-based Foundation for Defense of Democracies, said that while al-Sadr has previously “feigned a retreat from Iraqi policies,” the current turbulence is drastically different from previous political contests involving al-Sadr. Instead, he predicts “greater intra-Shiite political discord” going forward – an attempt by both pro-al-Sadr and openly pro-Tehran forces and voices to try to further bend Baghdad to their wills.

“Iran has long tried to co-opt and control the entirety of the Shiite population and political process in Iraq through fronts, militias, charities, and political organizations. Al-Sadr’s recent recasting of himself as a nationalist and large parliamentary bloc put him at odds with pro-Iran forces,” Taleblu said. “Sadr may have mishandled to miscalculated Iran’s willingness to play to the edge over the fight in parliament and is now left with the street.”

And Najem Al Qasab, a Baghdad-based political analyst, echoed the sentiment that al-Sadr’s tweets are “different.”

“Moqtada gave a deadline of tomorrow (Tuesday) for the federal court to dissolve the parliament. So, either that happens, and things calm down, or the situation in the country will spiral,” Qasab said. “His supporters are very angry and might go on to further escalate (the violence) by controlling the airports and oil companies. Sadrists will not stop until they achieve their demands.”

A statement issued by the United States Embassy in Baghdad on Monday referred to “reports of unrest” as “disturbing as Iraqi institutions are not being allowed to operate.”

“Iraq’s security, stability, and sovereignty should not be put at risk. Now is the time for dialogue to resolve differences, not through confrontation,” said the statement. “The right to peaceful public protest is a fundamental element of all democracies, but demonstrators must also respect the institutions and property of the Iraqi government, which belong to and serve the Iraqi people and should be allowed to function.”

The U.S. no longer has leverage in the seemingly broken nation, said Dan Hoffman, a former CIA station chief and Director of the Middle East and North Africa Division.

“It doesn’t look like any potential for an Iraqi government to form anytime soon, even though Sadr won most of the seats. So, he (Sadr) is saying, “Hey, this political process isn’t working, so I am going to pack up my stuff because to be involved in the politics of this country is a losing proposition,” Hoffman said. “Sadr is politically savvy and will make the decisions that are best for him. He sees himself as able to play a bigger role on the outside – his people on the streets protesting. Being part of a government that doesn’t deliver services to its people makes him a loser.”

Some Iraqis now fear the country is now peering into the barrel of a possible escalation of violence between Shia devoted to al-Sadr and Shia loyal to Tehran.

“Many people in Iraq now expect a civil war between Shia themselves. Many people are happy for what is happening today because they just want Iran’s (influence) to be over,” said Rusly Al-Maliki, a former Baghdad government analyst and author of “The Collapse.” “Sadr is using his followers to frighten to (Tehran) regime. But once it is out of control and people are killed, Sadr will be back. Being out of parliament, he will lose everything, so he is pushing for new elections.”

Nonetheless, other political leaders are confident that peace will prevail.

“We hope there will be a dialogue with all the political powers. We have no choice but to dialogue,” said Rayan al-Kildani, an Iran-aligned Christian representative in parliament. “We believe the issue will be resolved rationally and calmly. Iraq cannot tolerate escalation by any party.”