Earthlings will soon get the chance to experience the excitement of space tourism at Moon-shaped resorts.
By Dean Murray September 20, 2022
Facebook
Twitter
Linkedin
Email 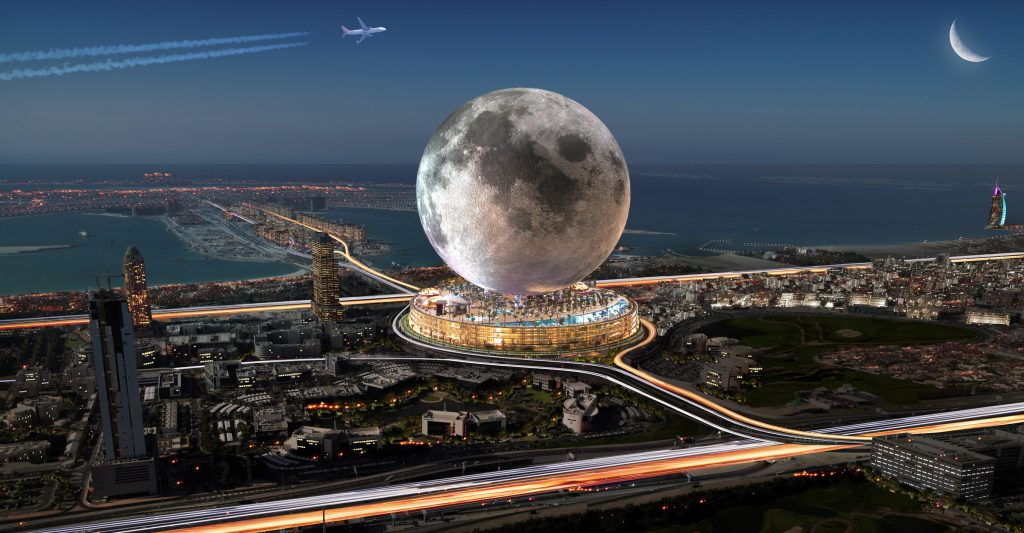 A company plans to build $5 billion resorts around the world – shaped like the Moon.

MOON is the brainchild of entrepreneurs, Michael R. Henderson and Sandra G. Matthews, co-founders of Canada-based Moon World Resorts Inc. (MWR), who see it as an opportunity for people to experience space travel without the cost of actually leaving Earth.

They say they will license four MOON resorts around the world, with one in North America, Europe, Middle East-North Africa (MENA) and Asia.

For the MENA region, Dubai is the front-runner, but options in Bahrain, Qatar, Kuwait and Saudi Arabia are also being considered.

“In a world of mediocrity, MOON will set an entirely new standard in build quality, environmental stewardship, and operational excellence,” said the co-founders, who hope to open their first location in 2027.

The multi-leveled MOON structure will contain a lunar surface and colony, as well as 4,000 hotel suits.

“MOON will act as the ultimate bridge, making it possible for everyone to join in the excitement of Space Tourism,” say developers MWR Inc. “As Musk, Bezos and Branson brilliantly seek out the next frontier; MOON will deliver a dynamic and authentic experience on planet earth; available to all, not merely a few.”

These luxury units – described as “very high-end” and worth “several million” – will be housed internally within the main superstructure disc buildings. Approximately 300 units will be available for purchase, with owners joining the exclusive Private Members Club at MOON.

“Within MOON one will find a huge array of components which will integrate to deliver a seemingly never ending journey of discovery,” MWR said. MOON’s “signature attraction” will enable guests to experience walking on the lunar surface while exploring a vast working lunar colony.

“An amazing, out of this world attraction, MOON will form the ‘bridge’ delivering an affordable and entirely authentic space tourism experience millions of enthusiasts around planet earth have been patiently waiting for; a chance to actually participate.”

Plans suggest a 48-month build time for a resort that could generate an annual revenue of $1.8 billion.