After days of record-shattering heat in the western the US, cooler air has filtered in along with daily showers and thunderstorms
By Andrew Johnson-Levine September 16, 2022
Facebook
Twitter
Linkedin
Email 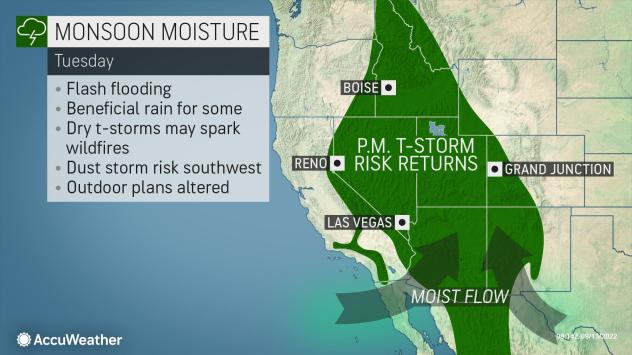 Some evacuation and shelter-in-place orders were issued due to mudslides for thousands of residents in other parts of Southern California on Monday.

After days of scorching, record-shattering heat in the western United States (US), cooler air has filtered in along with daily showers and thunderstorms across the region.

AccuWeather forecasters say that more of the same is expected through the rest of this week, even as the exact location of these storms may shift around from day to day. This stretch of wet weather began late last week, with rain from Tropical Storm Kay dousing much of Southern California, and leading to issues with flooding and mudslides.

Meanwhile, a surge of tropical moisture associated with the North American monsoon overspread much of the Intermountain West, bringing daily showers and thunderstorms across the region. In this scenario, “the trend to lower temperatures will begin in the upper atmosphere, as a dip in the jet stream moves ashore and becomes centered over the West. As temperatures aloft cool down, the air at ground level will follow suit,” AccuWeather Senior Meteorologist Mike LeSeney described.

In Phoenix, storms arrived late Sunday evening, along with a quick 0.62 inches of rain in the city. Damaging wind gusts reached as high as 86 mph at Sky Harbor International Airport, one of the busiest airports in the country, prompting a ground stop that caused flights to be delayed and rerouted.

Heavy rains caused mudslides in the Southern California city of Yucaipa. The Yucaipa Police Department issued an evacuation order for parts of the area. While this surge of moisture is often limited to a handful of states in the Southwest, storms may spread northward into states such as Idaho, Montana and Wyoming.

“With the northward flow of moisture remaining in place, the risk for thunderstorms will continue to stretch from Arizona and California, northward to Idaho and Montana,” AccuWeather Meteorologist Thomas Geiger said.

A slight change in this pattern may affect where the threat of showers and storms occurs on Wednesday and Thursday. This will allow some places to dry out as other locations get their first chance of rain in a lengthy period of time.

In the locations that receive the heaviest rain, flash flooding may become a concern. This is especially true in areas with mountainous terrain, as runoff can funnel into low-lying valleys and cause water levels to rise in a matter of minutes, forecasters say.

The increase in rainfall may prove beneficial to the ongoing drought, which still covers most of the Southwest according to the U.S. Drought Monitor.

The wet, humid pattern is expected to continue through most of the week in the West. By the weekend, a return to drier weather may be in store.