September Surge Of Heat To Bake The Northwest

As stifling warmth begins to ease across parts of the West, the Northwest will heat up.
By Ryan Adamson September 16, 2022
Facebook
Twitter
Linkedin
Email 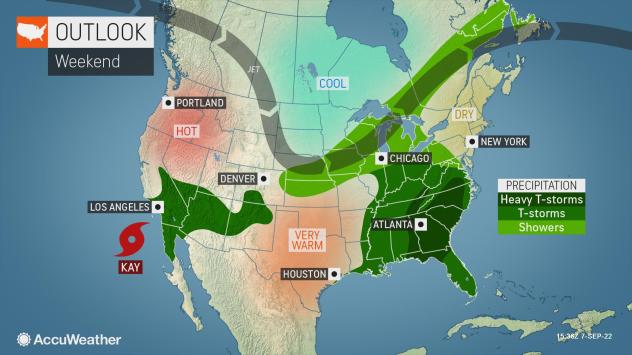 Unprecedented heat has broken hundreds of records across the western United States (US) this September. Sacramento and California hit a new all-time high of 116°F on Tuesday, while Death Valley has experienced a September record of 125 °F.

AccuWeather meteorologists say that a “heat dome” that has been parked over the Southwest and Great Basin for over a week is finally poised to break down by Friday and this weekend.

Part of this change in the pattern will be attributed to Hurricane Kay which was tracking northward toward Southern California on Thursday. While the brunt of the storm will stay offshore, the clouds and the rain will help send temperatures to lower levels.

Meanwhile, a dip in the jet stream will occur over the northern Rockies and eventually the northern Plains. As a result, places such as Salt Lake City, which has been at or above 100°F every day so far in September, will only be in the 80s by Friday and Saturday. However, that is a normal high in Utah’s capital city for early September.

The Seattle area has recorded temperatures about 2-3 degrees above normal this month, but farther south, locations in southeastern Oregon have been as much as 15°F above normal through the first seven days of September.

The hotter weather will again be found farther south along the Interstate 5 this weekend.

“On Saturday, Portland, Oregon, will come very close to the record high of 95°F set in 1973,” noted Geiger.

AccuWeather is currently forecasting a high of 94°F in Portland to begin the weekend.. Like Seattle, this will be 10 degrees above the normal high that occurs during the warmest times of the year.

Medford, located near the California border, is expected to come close to a record on Saturday as well with 103°F, challenging the record of 104°F set exactly 100 years ago.

Besides the heat, other factors could increase the risk of dangerous wildfires. Red flag warnings, which indicate a high fire danger, have been issued for parts of western Oregon and western Washington.

“Dry vegetation and winds that could gust up to 30 mph at times will cause a very high fire threat with any fires potentially getting out of control quickly,” cautioned Geiger.

Despite the lower temperatures, any precipitation is likely to be confined to areas well inland from the coast, according to AccuWeather meteorologists.