Rapper Tyga Sued For A Breach Of Contract

Rapper Michael Ray Nguyen-Stevenson, known as Tyga, has been sued by an NFT company for a breach of contract
By Bibhu Pattnaik September 16, 2022
Facebook
Twitter
Linkedin
Email 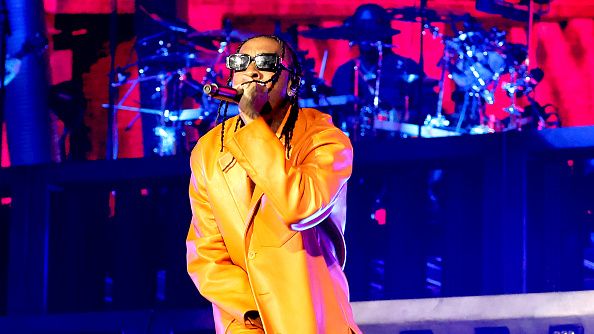 INDIO, CALIFORNIA - APRIL 24: Tyga performs with Doja Cat on the Coachella stage during the 2022 Coachella Valley Music And Arts Festival on April 24, 2022 in Indio, California. (Photo by Amy Sussman/Getty Images for Coachella)

Rapper Tyga is said to have breached a $500,000 contract, as he has been sued by a non-fungible token (NFT). NFT refers to a digital asset that is associated with the ownership of real-world items like art, video clips, music, and more.

According to Yahoo Entertainment, Kreation Technologies has filed a lawsuit against the rapper as he went ghost on a $500,000 opportunity. Tyga was supposed to create a custom set of digital art offerings.

The 32 years old rapper reportedly enter an agreement with Kreation to develop three sets of NFTs. He apparently consented to utilise and include his “name, image, likeness, music, and artwork” in the aforementioned collection in addition to taking care of the design and distribution.

The performer had reportedly committed to facilitating the design, creation, production, marketing, sale, and distribution of NFTs. Hee is reported to have received a signing bonus of $100,000 for the project. Tyga was formerly associated with the project which was announced in June.

“‘Ten Thousand TYGA’, the PFP NFT collection is the superstar’s latest foray into the NFT space and his first into the world of contemporary CryptoArt with partners Kreation,” the report read.

According to the lawsuit, the deal would consist of three drops, one with 10,000 unique NFTs, one with 75 unique NFTs, and a single exclusive one to be sold to one buyer. Kreation has indicated that it was “critical to the project’s success” that Tyga “utilize his status and public following to endorse and gain exposure” to the drops.

An earlier announcement mentioned the NFT project was a “highly anticipated Pharaoh-inspired” collection and would feature iconic tombs of accident pharaohs with a “techno-futuristic” vibe.

Kreation accused the rapper of not holding up his end of the bargain. He didn’t post about the project on his Instagram or Twitter, and subsequently canceled media interviews on Twitter’s Spaces and Reddit’s ‘Ask Me Anything forums.

“The Metaverse-ready collection, comprising 10,000 unique NFT artworks, is the creative vision of TYGA, whose long-standing fascination with the Pharaonic tombs of Ancient Egypt has found strong expression in other creative projects. Infused with hip-hop cool and a rich, techno-futuristic vibe, this NFT collection came to life through TYGA’s close collaboration with HOFA Gallery artists Bran Symondson and Léo Caillard”, Kreation said in a press release.

The company said that the deal falling apart caused issues with a new strategic partner they used as an NFT marketplace.

«Previous Post
Ray Charles Jr. Pays Tribute To His Father And Those Impacted By 9/11 »Next Post
Ripples In Crypto-Land As XRP Investors Take Bets On Interbank Payments Tech