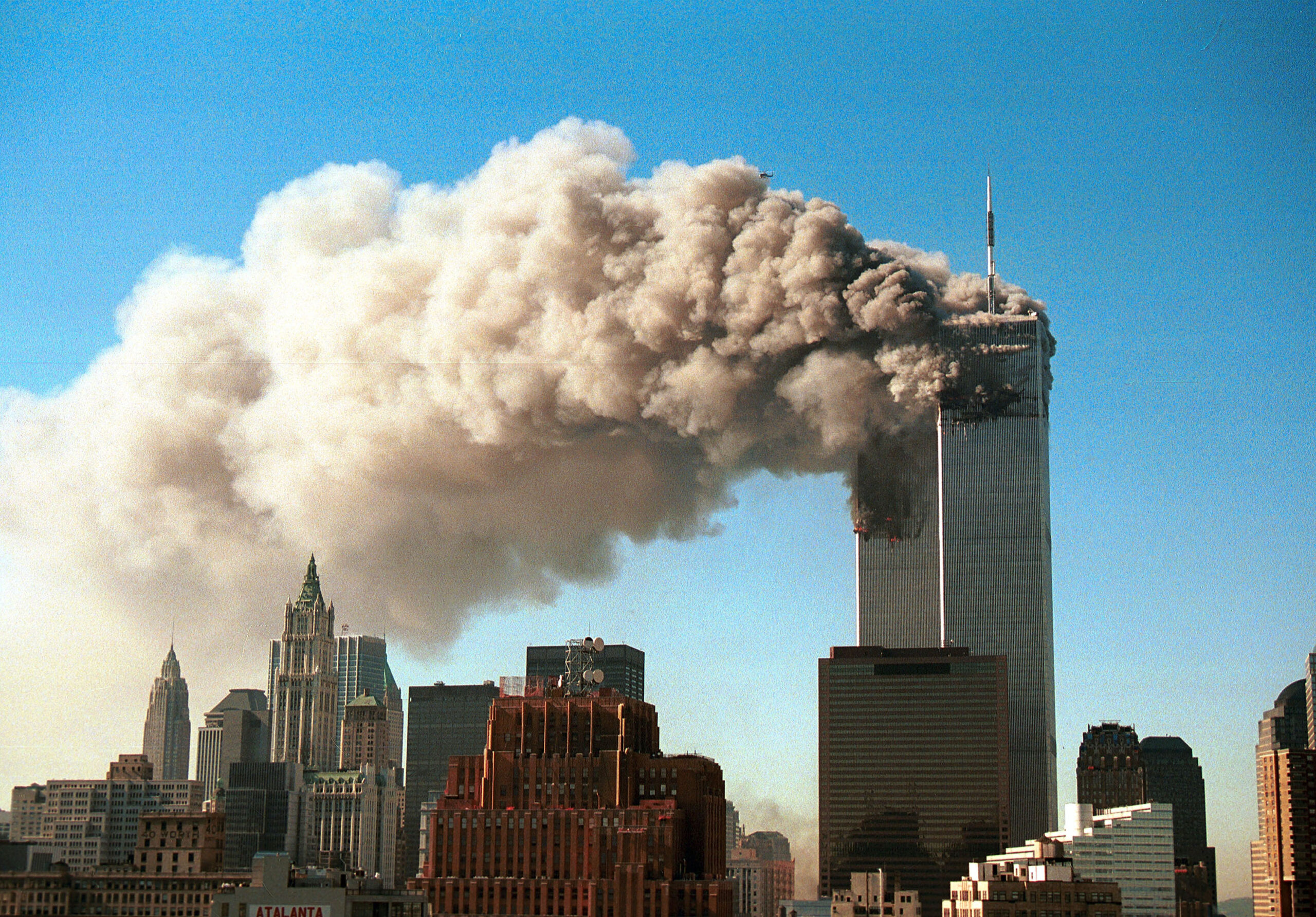 Smoke pours from the twin towers of the World Trade Center after they were hit by two hijacked airliners in a terrorist attack September 11, 2001 in New York City. (Photo by Robert Giroux/Getty Images)

The weather in New York City on Sept. 11, 2001, was beautiful — a clear and pleasant late-summer day that was marred by the smoke of burning jet fuel and billowing clouds of pulverized dust.

Yet mere hours before terrorists flew hijacked jetliners into the twin towers, carrying out the worst terrorist attack ever on United States soil, the weather was turbulent – even ominous.

On Monday, Sept. 10, a series of thunderstorms rumbled through New York City, and hundreds of miles to the east of the city, a massive hurricane loomed off the coast.

Footage of the storms was caught on video by a New York City-based artist who had been using studio space near the top of the North Tower that she and 15 other artists, who were working there through a residency program, had been provided by the Lower Manhattan Cultural Center.

The haunting and beautiful images Monika Bravo, then a 37-year-old artist from Bogota, Colombia, captured that stormy night represent the last known images of the World Trade Center prior to video captured seconds before an airplane was flown into the North Tower at 8:46 a.m.

Bravo had initially wanted to work from the 92nd floor of the skyscraper because she missed the clouds. As an artist, her creativity was rooted in her emotions and her origins, back in the mountains of Bogota where she grew up.

“The mountains, the elevation and looking at the clouds are part of my life,” Bravo told AccuWeather. “I wanted a connection to the clouds, because the clouds are a connection back to my source, where I come from. It’s a very home-like experience,” she recalled about her perch in a studio on the 92nd floor.

For the entire summer of 2001, Bravo was left frustrated by the lack of eventful weather and the calm clouds that swirled outside her office. Working on a film piece, she grew increasingly disappointed that she wouldn’t capture the weather footage she needed.

However, Sept. 10 offered a change.

“On that day, on Sept. 10, there was a big thunderstorm that started around 2:55 p.m. and that’s what I ended up recording and saving into this tape,” Bravo said.

The next day, Bravo’s world would crumble and the scenes she shot that day would become the last surviving footage filmed inside the North Building of the World Trade Center.

At 2:55 p.m. on Monday, Sept. 10, 2001, Bravo set up her camera and began filming seven hours’ worth of thunderstorm footage. She was so excited to finally shoot her needed scenes that she didn’t want to leave the office.

It wasn’t until her then-husband called at 11p.m. that she was convinced to go home, remembering to take the tape with her because she wanted to share the footage of the storm.

The next morning, Bravo and her husband were awoken by a call from a worried friend, begging to know if she was home. Living in Brooklyn Heights, a neighborhood just across the East River from Lower Manhattan, Bravo had a clear view of the towers.

The weather on Sept. 11 was calm and pleasant. A cold front had begun to move hurricane out to sea. Meteorologist Jesse Ferrell noted the historical significance of a brilliantly sunny sky, one that played a key role in the ways the day was recorded and remembered.

“You die when you have to, every other day you have to keep on living,” Bravo said of the translation of her film’s title to English. “The title is a reference to an email that I received from a curator friend of mine a few days later, when she said, ‘You never die the day before you’re supposed to die.'”

For the last living footage of what happened in the buildings before the attacks, Bravo’s film holds a special personal significance as well – dedicated to Michael Richards, a sculptor and friend who shared the same work space and who had remained in the building over night.

“It’s a very haunting piece,” Bravo said. “For me, it’s very eerie because the weather sort of brings back these emotions. The weather makes us feel a lot; it can make us fearful or make us hopeful. In here, it was kind of like everything was accumulating towards something. Even the pace of the music makes it feel like something is about to happen, and this is the last time we can see things from this point of view, this high. It’s like looking into a world that doesn’t exist anymore.”