Old Kernville is a town that appears to be taken right out of a Western movie -- serving as the backdrop for many classics.
By Wyatt Loy September 15, 2022
Facebook
Twitter
Linkedin
Email 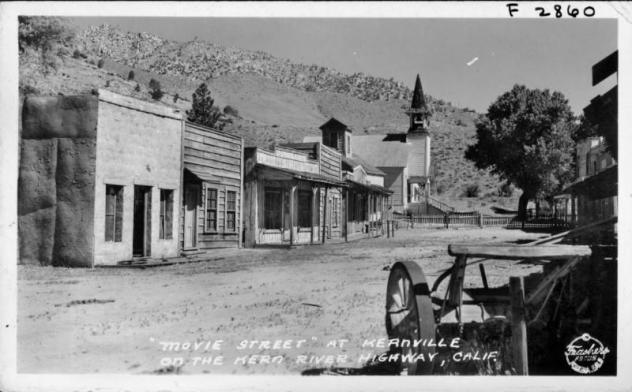 Old Kernville is a town that appears to be taken right out of a Western movie — because it served as the backdrop for many classics, featuring the likes of John Wayne, Gene Autry, Hopalong Cassidy and more. While all of the Hollywood glamour has left the town long ago, one might not ever guess that it was once fully submerged and has now resurfaced.

“There were people here. There was life here. It survived explorers, massacres, gold rushes, massive floods and tourism,” the Sierra Nevada Business Council wrote on its website. “But it could not survive progress and now sits in silence with very little to let one know that it was even here.”

About 35 miles northeast of Bakersfield, California, Old Kernville used to be a thriving community. Previously named Whiskey Flat due to a saloon of the same name, the town sprung up toward the end of the Gold Rush in 1860. It sat in the hills of Lake Isabella and the Kern River, the latter being where it got its new name following a massacre of the local indigenous tribes in 1863, when about 70 settlers killed about 200 Native Americans and exiled hundreds more, according to SFGATE.

“Families were moving in, and it was no longer fitting to have the name associated with ‘demon rum,’ as the ladies of the town called it,” the business council’s site states.

It was after the turn of the century that it became a hot spot for movies set in the Wild West. Old tales of gunslingers from Whiskey Flat loosely inspired some of Clint Eastwood’s quick-drawing characters in movies like The Good, The Bad and The Ugly and Unforgiven, according to SFGATE.

The town also served as the backdrop for John Ford’s 1939 Oscar-winning film Stagecoach.

A portion of Stagecoach, featuring John Wayne, was filmed in the Kern River Valley, in an area called Tilly Creek.

“When this location was scouted earlier in the year, the Kern River was low. When the filming took place, the river was raging and brimful, so the scene had to be modified,” the Kern Valley Museum states on its website. “In one of the scenes, you can see logs tied on each side of the stagecoach, allowing it to be floated across the river.”

Residents of Kernville created an area called “Movie Street,” a part of town seemingly frozen in time, where film crews could shoot movies or TV shows with an authentic backdrop, according to the museum. Locals would also provide lodging for crew members and even served as extras when needed.

After World War II, the military took control of the land in order to build a dam on the Kern River, which created a reservoir that would flood the entire town. Residents took what little they could to higher ground while the majority of Old Kernville was detonated and washed away. The new settlement carried on their legacy in the form of “new” Kernville.

Prolonged drought eventually dried up the reservoir — it’s now been reduced to as little as 8 percent of its original capacity, according to SFGATE. As a result, the foundations of what used to be Kernville now see the light of day for the first time in almost 100 years. Retired film producer and Kernville resident Chuck Barbee still visits the old site to marvel at what it once was.

“There are still stories of an untold Old West here,” Barbee told SFGATE. “What makes this place special is that it’s virtually unchanged, and you can still see what it was like when the first settlers came here in 1861.”

According to SFGATE, the original jail, general store and a church were lost in the flooding, but their foundations and their stories remain.

“It’s fun to go out there,” Barbee said. “I don’t think you’re going to find any dead bodies like Lake Mead, but there certainly are old ghosts around those buildings.”

Every year since 1957, the new Kernville hosts a festival called Whiskey Flat Days, four days of Wild West reenactments, carnival rides, rodeos, food and craft groups, art shows, live performances and more. Local vendors and activities bring visitors in from across the state to relive the times of gunslinging and homesteading.

In more recent years, Kern County, which includes Kernville, remains a popular spot for filming. Many modern classics like Jurassic Park, the Star Trek films, Iron Man and The Fast and The Furious series have had portions filmed there.Popular TV series have also used the area as backdrops, including Days of Our Lives, Battlestar Galactica, Firefly, MacGyver, Mythbusters and many others.

A tremendous 98 percent of California was under a severe drought as of mid-September, according to the U.S. Drought Monitor. About 82 percent of Kern County was under an even worse exceptional drought.

According to Drought Monitor, the symptoms of an exceptional drought include “exceptional and widespread crop/pasture losses” and “shortages of water in reservoirs, streams, and wells creating water emergencies.”

In California and other parts of the western U.S. specifically, prolonged periods of drought combined with a recent heat wave have fueled dozens of wildfires. Though the heat has backed off since last week, the drought is ongoing.

Drought in the West has developed a knack for uncovering remnants of towns and artifacts thought lost to time and flooding. A ghost town in Utah that was discovered in 2021 on the shores of Rockport Reservoir, about 45 miles east of Salt Lake City, shares a stark similarity to Kernville.

Founded in 1860, the same year as Kernville, Rockport was a small frontier settlement of about 200 people. Almost overnight, the townspeople broke out into conflict with the already poor and struggling Ute tribe, which had been living there prior to the settler’s arrival. Similar to Kernville, the government purchased the town in the 1950s to build a dam and reservoir, washing the buildings away and sending their inhabitants upstream to find new homes.

Lake Powell in Utah is another man-made reservoir that has experienced a profound dry period, leading to discoveries like a large shipwreck sitting completely out of the water. Liz Bowles and her family had been camping when they found the wreck jutting up from the shores in April 2021.

“We tried to not disturb it too much, because we don’t know how secure it is there and we didn’t want anyone to get hurt,” Bowles told Fox 13 News at the time. “But we could see that there had been some people that had tried to recover it at some point. There were straps on it and things like that, that they were obviously unsuccessful getting the boat out of the water.”

Lake Mead is somewhat infamous for the discoveries people have found on the edges of its shrinking shores — most notably, the presence of several human remains.

Other findings include a similar shipwreck, a B-29 Superfortress airplane, a lost Native American city and St. Thomas, Nevada: Yet another ghost town, founded by Mormons in 1865, that served as a major point of interest along the Arrowhead Trail between Salt Lake City and Los Angeles.