A biopic on life of Mother Teresa is set to hit theaters this fall.
By Clemente Lisi September 12, 2022
Facebook
Twitter
Linkedin
Email 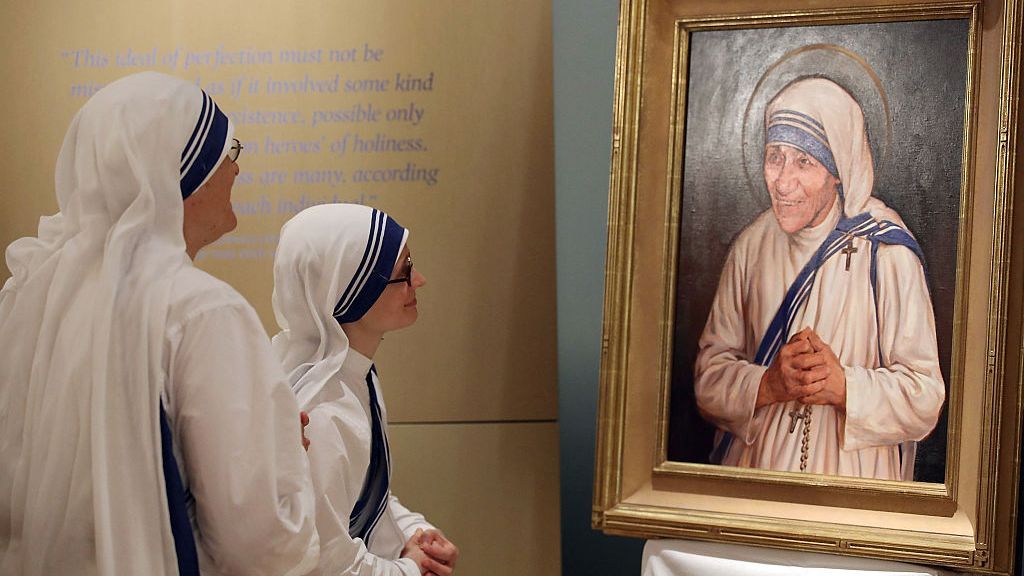 Sisters of the Missionaries of Charity look at the official canonization portrait of Mother Teresa, during a portrait unveiling ceremony at The Saint John Paul II National Shrine, Sept. 1, 2016, in Washington, DC. Mother Teresa was a Albanian nun who founded the Missionaries of Charity religious order to care for the poor in India and around the world. (Mark Wilson/Getty Images)

Mother Teresa — one of the most famous saints to emerge from the 20th century for her work helping the poor in India — is the focus of a new documentary that will hit U.S. theaters in October following the film’s recent Rome premiere.

“Mother Teresa: No Greater Love”, produced by the Knights of Columbus, will be in nearly 1,000 theaters across the United States for an exclusive two-day only event from Oct. 3 to 4. The documentary is part of Fathom Events’ “Saint Series”, a collection of films that delves into the lives of Catholic saints.

“Mother Teresa taught us that there are no expendable people,” said Knights of Columbus Supreme Knight Patrick E. Kelly. “Everyone we encounter is made in the image of God. So, when she was feeding the hungry or holding the hands of someone as they lay dying, she was treating them as she would the most important person in her life, Jesus Christ himself. And, in all of this, she was teaching us to have a heart that sees, and if we can learn to see as she did, the world would be a radically different and, I would say better, place.”

The movie’s aim, according to director David Naglieri, is to help a new generation of people understand and know the about the saint’s life and how her order, the Missionaries of Charity that she founded in 1950, continues to help those in need.

“I felt like this film was very, very necessary today to remind people of this incredible life and also the incredible work that continues to be done by the Missionaries of Charity,” Naglieri told Catholic News Agency’s sister organization ACI Prensa.

The documentary premiered last month at the Vatican Film Library in Rome — Pope Francis was not in attendance but was given a copy — and also shown at the nearby North American College. The audience for that screening included seminarians, many of whom were children when Mother Teresa died in 1997.

The film comes as some have criticized Mother Teresa’s work and legacy. Michelle Goldberg penned an opinion piece in The New York Times last year that ran on its website under the headline “Was Mother Teresa a cult leader?” The piece was about a podcast series called “The Turning: The Sisters Who Left”, featuring interviews with nuns who had left the order and had nothing but negative things to say about Mother Teresa.

One of Mother Teresa’s biggest champions was St. John Paul II. Mother Teresa was made a saint by Pope Francis in 2014. The Albanian-born nun had become a media star decades earlier, but not by her own doing. Malcolm Muggeridge’s 1971 book “Something Beautiful for God” catapulted the nun into the international limelight after he’d interviewed her two years earlier for the BBC. In the process, the the Missionaries of Charity have done a lot of good around the world.

The new documentary focuses on just that, according to Naglieri, and features interviews and commentary from Bishop Robert Barron, founder of the Catholic ministerial organization Word on Fire, and Jim Towey, a friend of Mother Teresa who also authored the book “To Love and Be Loved: A Personal Portrait of Mother Teresa.”

Tickets for “Mother Teresa: No Greater Love” can be purchased online by visiting Fathom Events or at participating theater box offices.

«Previous Post
Han Solo’s Blaster Sells For $1 Million — The Gun’s Story Reveals A New Side Of The First Star Wars»Next Post
Ray Charles Jr. Pays Tribute To His Father And Those Impacted By 9/11