Vaping Has Become A Gateway To Nicotine Addiction For Teens, New Study Finds

Experts stressed that vaping is not harmless, it can damage the lungs, blood vessels and brain.
By Simona Kitanovska September 7, 2022
Facebook
Twitter
Linkedin
Email 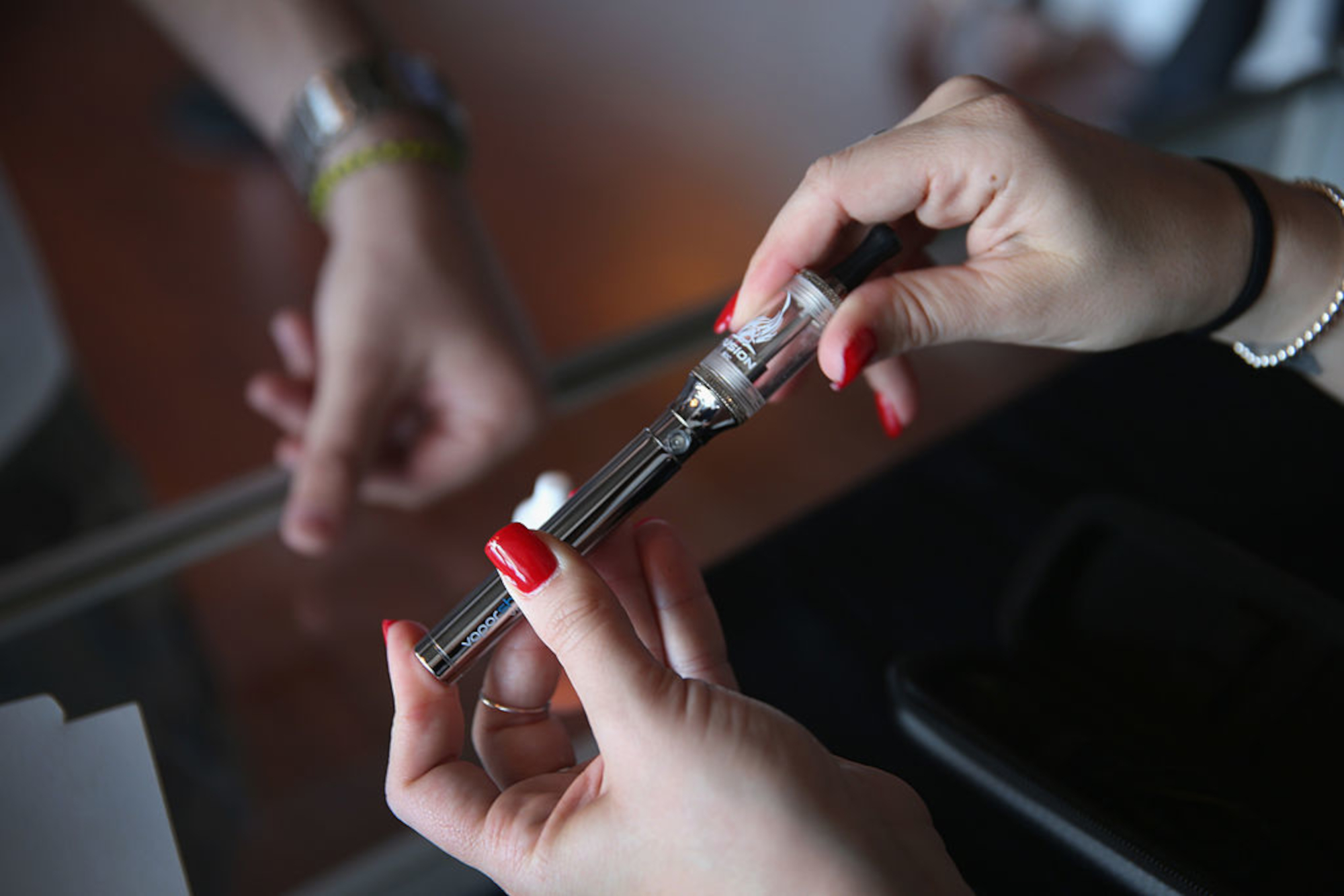 Julia Boyle shows a customer an electronic cigarette they shop at the Vapor Shark store on April 24, 2014 in Miami, Florida. Vaping has become a gateway to nicotine addiction for teens as most who take it up have never smoked before, a new study warned. (Photo by Joe Raedle/Getty Images)

Vaping has become a gateway to nicotine addiction for teens as most who take it up have never smoked before, a new study warned.

Often perceived as a stepping stone to quitting smoking, more and more youngsters are vaping without having ever smoked. Teens whose parents smoke are “dramatically” more likely to vape and those with smoker parents were 55 percent more likely to start vaping.

Experts stressed that vaping is not harmless, it can damage the lungs, blood vessels and brain, according to the study from TobaccoFree Research Institute Ireland (TFRI) in Dublin, which is to be presented at the European Respiratory Society International Congress in Barcelona.

E-cigarette uptake nearly doubled between 2014 and 2019, leading TFRI to warn that vaping is becoming “a route into nicotine addiction” for young people, with less parental monitoring and having smoker friends as major factors in teen use.

Though boys are more likely to pick up the vapes, girls are turning to them more and more as well.

The most comprehensive analysis of teenage e-cigarette use in Ireland, containing information on over 10,000 Irish teens aged 16 to 17, found the proportion who had tried e-cigarettes increased from 23 percent in 2014 to 39 percent in 2019.

This fits another trend, teenagers are increasingly turning to vaping without ever smoking actual cigarettes. In 2015 32 percent tried e-cigarettes without ever trying tobacco, rising to 68 percent in 2019.

Luke Clancy, TFRI director general professor, said: “We have found increasing use of e-cigarettes in Irish teenagers and that’s a pattern that is emerging elsewhere in the world.

“There’s a perception that vaping is a better alternative to smoking, but our research shows that this doesn’t apply to teenagers who usually haven’t tried cigarettes prior to e-cigarettes. This indicates that, for teens, vaping is a route into nicotine addiction, rather than out of it.”

Of another 3,421-person cohort, the researchers found that boys were more likely to use e-cigarettes but the number of girls on the vapes was rapidly increasing too. Ten percent said they were currently using e-cigarettes in 2015, rising to 18 percent in 2019.

Doctoral researcher, Salome Sunday, said parents and governments need to do more to crack down on vaping, just as they did with smoking.

She added: “We can see that parents and friends have an influence on teenagers’ decisions to try e-cigarettes and that’s important because these are factors that we can try to change. However, governments need to play their part by making laws to protect children and young people. We already do this with smoking and we need to do the same with vaping.”

They acknowledge that the trend in Ireland is not unique, as vapes are being picked up more and more across the globe.

Dr. Joan Hanafin, a lead researcher, added: “We can see that the number of teenagers using e-cigarettes is changing fast, so we need to keep monitoring the situation in Ireland and around the world.

“We also plan to study social media to understand how this influences girls’ and boys’ vaping behavior.”

Professor Jonathan Grigg is chair of the European Respiratory Society’s Tobacco Control Committee and was not involved in the research.

He said: “These findings are worrying, not just for teenagers in Ireland, but for families all around the world. We know already that children of parents who smoke are more likely to take up smoking.

“This is important because we know that e-cigarettes are not harmless. The effects of nicotine addiction are well-established, and we are discovering that e-cigarettes can harm the lungs, blood vessels and brain. We need to do more to protect children and teenagers from these harms.”