The lithium battery is the most significant advance in the decarbonization of the world, also known as the "green movement.”
By Charles Epstein September 7, 2022
Facebook
Twitter
Linkedin
Email 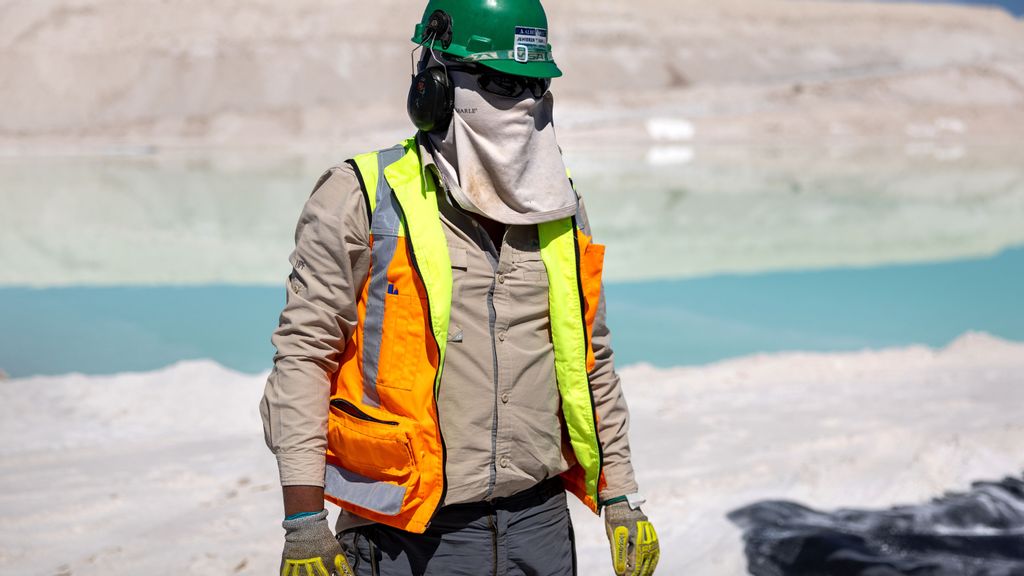 A lithium mine worker inspects a pump at an evaporation pond in the Atacama Desert on August 24, 2022 in Salar de Atacama, Chile. (Photo by John Moore/Getty Images)

BOYNTON BEACH, Fla. — Global revenue in the electric vehicle market is projected to exceed $384 billion in 2022, making lithium-ion batteries one of the planet’s most desired commodities – and China, Australia, and the U.S. are vying for their share.

Everyone wants a piece of the electric-car and green energy industries. Ford announced plans to annually produce about 150,000 full-size electric pickups for the U.S. market, while the Rockefeller Foundation has begun a project to deliver renewable electricity to 25 million rural Indians using new battery technology. Electric vehicle sales have continued breaking records. More efficient industrial batteries are being used in everything from cars to portable power plants, and in all types of engines now powered by hydrocarbons.

Electric car batteries rely on lithium hydroxide, which is most economically derived from a hard rock called spodumene. Since demand for this essential battery material is increasing, the price of Australian spodumene, one of the world’s top three sources of the mineral, has increased from $500 a ton in 2018 to $2,500 a ton in 2021, according to the Benchmark Mineral Alliance.

Because demand is increasing, the current critical need is to maintain an adequate supply of the raw materials to manufacture batteries.

“There are two lithium prices depending on the origin,” said Peter Newman, professor at the Curtin University Sustainability Policy Institute in Perth, Australia. One way that lithium is produced happens when it is crushed and put into huge brine pits where the water evaporates and leaves behind the lithium.

“Brine produces lithium carbonate which is much harder to convert to lithium hydroxide and that is what battery makers are after. Spodumene is the hard rock which can be crushed and converted into lithium hydroxide much easier, hence the world’s battery manufacturers are moving away from brine to spodumene.”

In 2021, Australia produced 323,000 tons of lithium carbonate, followed by Chile (145,000 tons), Argentina (30,000 tons), and China (8,000 tons), according to Mark Seddon, senior metals manager at Argus Media. However, unlike some other materials used in battery manufacturing, lithium is readily available.

“Elon Musk said it simply by explaining the geology of lithium. [Musk] said ‘it’s all over the place,'” Newman said. “It’s a crustal element, so you just need a place like Western Australia where the crust is exposed, and you will find it everywhere. Every few weeks there is a new discovery.” This includes Ukraine, where a large deposit of lithium was recently discovered.

Together, these top three nations accounted for 86 percent of world lithium production in 2021. Meanwhile, the US share of lithium production fell from 27 percent in 1996 to 1 percent in 2020, according to the BP Statistical Review. By 2020, there was only one operating lithium mine in the US.

The Lithium Supply Hinges on the Details

The lithium battery is the most significant advance in the decarbonization of the world, also known as the “green movement.” “It not only enables power to be solar and wind-based, it enables all kinds of things to be electric and, in particular, electric vehicles of all kinds,” Newman said. “The myths concerning its shortages and its difficulties in supply are all being created by incumbent businesses and politicians who don’t want to see change.”

Western Australia now has 12 mines in operation or in construction that can meet global lithium demand, according to Newman. Western Australia exports four million tons annually of spodumene and has three new lithium processing plants that are processing lithium hydroxide to 99.99% purity. “When all these mines all fully operating, they will provide the second-highest amount of battery-level lithium in the world,” Newman said.

These mining and processing plants in western Australia have been developed by American, Chilean, and Chinese companies.  “Thus, in the past year, Australia produced 49% of the world’s lithium and Chile has dropped to 22%. The future is likely to see Australian sources of lithium and lithium hydroxide become the dominant supply source and thus the geopolitics of supply chain issues are likely to be avoided.”

Newman’s positive raw lithium supply projections differ from those of Joe Lowry, also known as “Mr. Lithium,” who serves as a consultant to mining companies and as an investor in electric car and battery production companies. In a 2019 paper, Lowry said the demand for lithium would outstrip supply. “I believe there will be a day in the future when lithium is in oversupply, but it won’t be in this decade, said Lowry in an interview with Bloomberg.

Lowry’s rationale is that lithium is a specialty chemical that has to go through rigorous testing before it is ready to become part of the electric car battery production process.  Currently, the world’s electric car makers are competing for the additional production of fewer than 150,000 tons of lithium.

The Russian invasion of Ukraine also indirectly affects the price of electric car batteries. “Global sanctions against Russia may have an effect with regard to metals like aluminum and nickel, as well as strategic minerals like palladium, scandium, and titanium,” Rushton said. “But, to the extent sanctions reduce the availability of nickel, this could impact the electric vehicle market in that it is one of four strategic minerals necessary for lithium-ion battery production (along with lithium.)”

While most people shopping for cars focus on the sticker price, the cost of owning an electric car over the long term is cheaper than owning a gas-powered one. “Many EVs are in fact already cheaper on a lifetime basis than conventional ICE cars because of the comparatively low cost of electricity,” according to a white paper by Argus Media. To help subsidize electric car prices and promote environmentalism, governments have been issuing grants to electric car companies.

Electric car prices have dropped due to better technology, changes in battery manufacturing, and economies of scale. All these factors “will all push down EV battery prices, which we see reaching a nominal $100/kilowatt hours — the level is conventionally taken to be at parity with ICE— by 2022-23,” the Argus paper said.

As more people buy electric cars, “the result will be a dramatic increase in EV sales over the next 10 years and beyond.”

Argus forecasts that Europe will become a larger market than China by 2025, with the US staying in the third spot. By 2030, Argus predicts that EVs will hit sales of nine million units a year and account for over 25 percent of new car sales globally. The current global race to secure lithium supply will determine who gets the biggest share of the market.