Will Biden make a move to renegotiate nuclear arms treaties amid the tension in Russia and Ukraine?
By Yasmin Rasidi September 7, 2022
Facebook
Twitter
Linkedin
Email 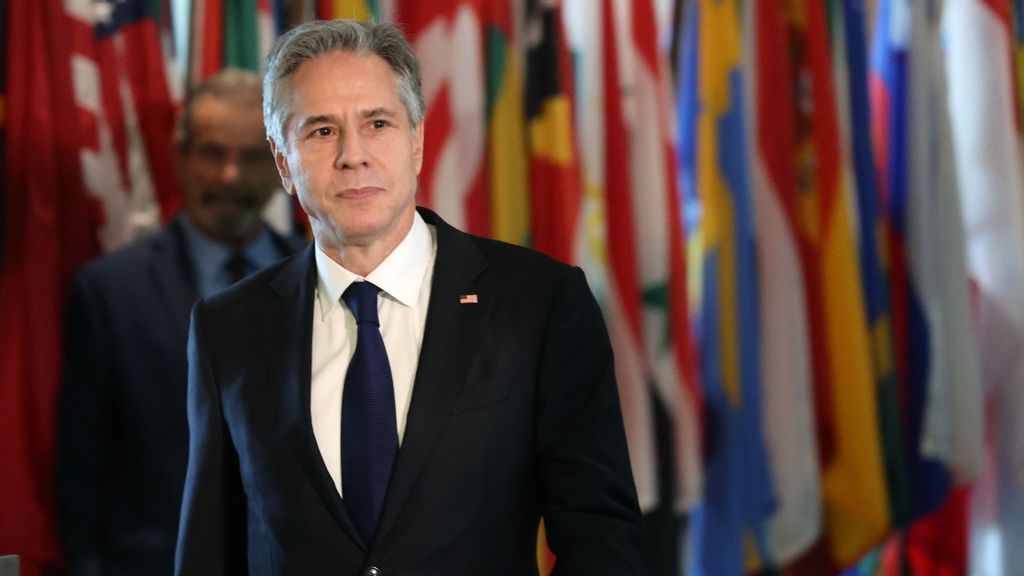 U.S. Secretary of State Antony Blinken speaks to the media after attending the tenth annual review of the Nuclear Non-Proliferation Treaty at U.N. headquarters on August 01, 2022 in New York City. (Photo by Spencer Platt/Getty Images)

Both Russian and U.S. leaders have stressed the importance of maintaining dialogue regarding nuclear arms control during the conflict in Ukraine. Russia and the U.S. possess the world’s highest numbers of nuclear warheads—with 5,977 and 5.428, respectively, according to the Stockholm International Peace Research Institute’s 2022 report.

Kremlin spokesperson Dmitry Peskov avoided answering tricky questions related to the possibility of nuclear war but called for resuming the negotiation of the new Strategic Arms Reduction Treaty, which restricts the strategic warheads and launchers of the world’s two nuclear powers.

The treaties have Cold War roots: Russia (formerly the Soviet Union) and the U.S. signed the Intermediate-Range Nuclear Forces treaty in December 1987, after Moscow and Washington deployed missiles in Easter Europe and several Western nations in 1977 and 1983, respectively. The treaty required both sides to declare and terminate all of their nuclear arsenals, including ground-launched ballistic missiles with ranges of between 5,00 and 5,500 kilometers.

The first Strategic Arms Reduction treaty was signed in July 1991 by former President George H.W Bush and Soviet leader Mikhail Gorbachev five months before the collapse of the Soviet Union. The treaty was effective in 1994 after three former Soviet states– Ukraine, Kazakhstan, and Belarus — supported the pact.

When former President Trump shelved the Intermediate-Range Nuclear Forces treaty in 2019, he accused Moscow of violating the treaty by deploying its latest cruise missiles, which Moscow denied.

“Now, any attempt at renegotiating the treaties should be made with utmost good faith. The discussed terms should be such that both parties can uphold their end of the bargain, said Lyle Solomon, attorney at Oak View Law Group.

“The [Intermediate-Range Nuclear Forces Treaty] had the core goal of ‘requiring the destruction of the parties’ ground-launched ballistic and cruise missiles with ranges of between 500 and 5,500 kilometers, their launchers and associated support structures and support equipment within three years after the treaty enters into force’. Such a treaty may be challenging to work out now,” said Solomon.

As military technology advances, the new treaty extension needs to address all new types of weapons, said Lt.Col. Rip Kirby, CEO of Common Intelligence, who served as the special operations warfare policy for the White House.

“The current [strategic arms] treaty is already ten years old and did not cover everything we have now regarding technology. New technology includes smaller warheads that are more destructive, smaller vehicles. The treaty is for 10 to 12 years old because we know the technology is more advanced, so we need to renegotiate every new treaty,” Kirby told Zenger.

The comprehensive treaty must address issues such as developing hypersonic missiles and cyber security, according to national security analyst Brandon Weichert.

“One of the interesting things is that Russia has advanced with its hypersonic technology. The bigger problem is we are focused on the new-age weapon system. What about satellites? What about cyber security? None of these issues have been addressed. If you want to deal with Russia diplomatically, you must address those topics,” said Weichert.

The Trump administration demanded that the extension had to cover all types of warheads in October 2020. However, the need for such a restriction was irrelevant as Russia had yet to build up its stockpiles.

Other nations are also modernizing their nuclear weaponry, including China and India.

“China, the European Union, and other countries such as the U.K., Japan, South Korea, India, Australia, South Africa, and Brazil have a huge say over international relationships. It is no longer a bipolar world under which [the treaties] had come into force. Thus, any negotiation into a modified [treaty] has to include third parties and neutral parties and consider the view of other powers on the issue. Major powers like India, which has remained neutral to the U.S. and Russia throughout the Ukraine war, may help broker a deal between them,” said Solomon.

Previously, Trump insisted that China had to be included in the negotiation. But Beijing rejected the notion, claiming that their arsenal of warheads is smaller than that of Russia and the U.S.

“Its direct support to Ukraine with heavy arms, including sophisticated rocket launchers such as the High Mobility Artillery Rocket System, may push it further away from ever talking to Russia face to face,” Solomon said.

According to Solomon, arms control renegotiation will likely succeed if Washington reduces military support to Ukraine.

«Previous Post
In France, A Memorial To Remember All Who Served NATO»Next Post
The “End Of An Era”: The Death Of Britain’s Longest Reigning Monarch Signals Change For 15 Nations