Saudi Falcons Club to partner with a number of institutions including the University of Oregon on Falcon consevation effort.
By Joseph Hammond September 7, 2022
Facebook
Twitter
Linkedin
Email 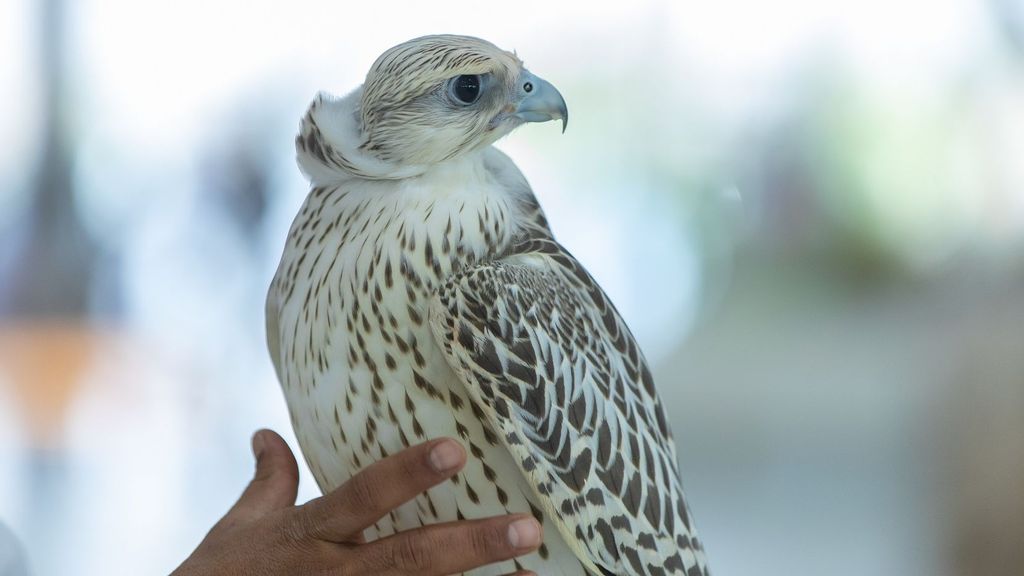 A rare falcon for sale at the 2022 International Saudi Falcons and Hunting Exhibition near Riyadh. Saudi Arabian authorities have launched a number of conservation efforts for the rare birds of prey.

RIYADH, Saudi Arabia — Three seconds. Saudi Arabia’s ambitious falcon reintroduction program often hinges on the brief moment when a falcon is shown it new home for the first time. Under new protocols being developed under the program a hooded falcon is brought to its potential habitat for the first time under a hood. Bred in captivity the Saudi Arabia’s wilderness can at first seem mysterious. The birds must be introduced slowly to the habitat.

“You uncover the hood for 3 seconds. Then you cover it back and take it home,” says Hussam Al-Huzaimi, the CEO of the Saudi Falcons Club,” Then three days later you bring it back and do something different. This way you start to intrigue the bird. It starts to get interested in what it is seeing and feel safe.”

Saudi Arabia’s Hadad program for the reintroduction of falcons to Saudi Arabia is a partnership between researchers, falconers, and wildlife volunteer who are developing new and researched based methods to repopulate the kingdom with birds of prey. Techniques they hope to one day apply elsewhere around the globe. The program brings together multiple Saudi entities as well as international entities — including aviary experts from Oregon State University.

The migratory nature of the birds makes their lives peripatetic. When a falcon is introduced into Saudi Arabia’s nature reserves there is no guarantee the bird will stay. Each new site is chosen carefully and researchers have to pick-up on careful clues, like stained rocks that suggest at one point in the past the site was home to a falcon nest. Numerous site across Saudi Arabia suggest it could support a larger falcon population in the future.

During the first year of the program in 2021 a total of 33 female falcons bred in captivity were introduced to areas with male falcons already present. The eventual couplings produced 47 chicks. This year another 24 females which was equally successful. So far the breeding program has produced 151 chicks.

The Hadad program was recognized in 2021 its efforts at falcon preservation at a conference of the International Union for Conservation of Nature (IUCN) in Marseille which was opened by French President Emmanuel Macron. The accolades are important for the Hadad program in part because it is the ambition of the Saudi Falcon Club to fund similar falcon reintroduction efforts around the globe.

There are four species of falcon present in the kingdom of Saudi Arabia. The Barbary falcon and the Lanner falcon while the Saker falcon and peregrine are transient vistors.

Today it is estimated that roughly half of the world’s falconers call the Middle East home. Like any sport the participants are always looking for a competitive edge. As such the 2022 International Saudi Falcons and Hunting Exhibition brought half a million visitors to a purpose build exhibiton hall north of Riyadh. Among them were many local falconers seeking to improve the ability of their hunting birds.

UFO,a new drone factory that focuses solely on drones for falconry applications and is supported by two Italian falconers and researchers made a popular presentation during the event.

“This technology is use to muscle up the hawks and making them more competitive against a non-biological target. It also helps rehabilitate hawks,” says Giovanni Granati an Italian falconer and developed of the “UFO” drone factory.

Drones used as practice game can help keep falcons training while local populations of game birds like the houbara bustard replenish. Indeed, both falcons and many of their traditional prey are endangered or threatened species in various parts of the world. This year the Imam Turki bin Abdullah Royal Nature Reserve Development Authority announced this August that it had launched a houbara breeding center. The latest chapter in the kingdom’s decades old effort to help the species.

The Saudi Falcon enforces rigorous standards to ensure the birds on display and for sale are no longer being captured in the wild (traditionally captured falcons were often released at the end of the season. A starter bird could be had for just a few thousand while the most expensive command hundreds of thousands at auction. Last year gyrfalcon earned a record $500,000 during the exhibition’s auciton.

A few hours drive from Riyadh where the Saudi Falcons Club and the exhibition center are a number of archeological sites associated with the Neolithic Al Magar civilization.

Yet, you never really can domesticate a bird of prey he points out.

“You have to build a bond and it can be lost in an instant. Even a bird you have had for 10 or even 20 years and it can leave you just like that for any reason,” Al-Huzaimi says with a soft snap.

Falconers must spend time with their birds daily to build a strong bond to avoid such an eventuality. Each bird takes much care and when traveling internationally from Saudi Arabia they must have an aviary passport – to protect against illegal trafficing. For Huzaimi and the thousands of falconers around the world the hardwork associated with the hobby is worth it.

“When you have a bird of prey, a living falcon just sitting on your arm looking right back at you, the feeling is just incomparable,” says Al-Huzaimi.