The images were obtained from the Russian Ministry of Defense on Friday, September 2 and on Sunday, September 4.
By Joseph Golder September 7, 2022
Facebook
Twitter
Linkedin
Email 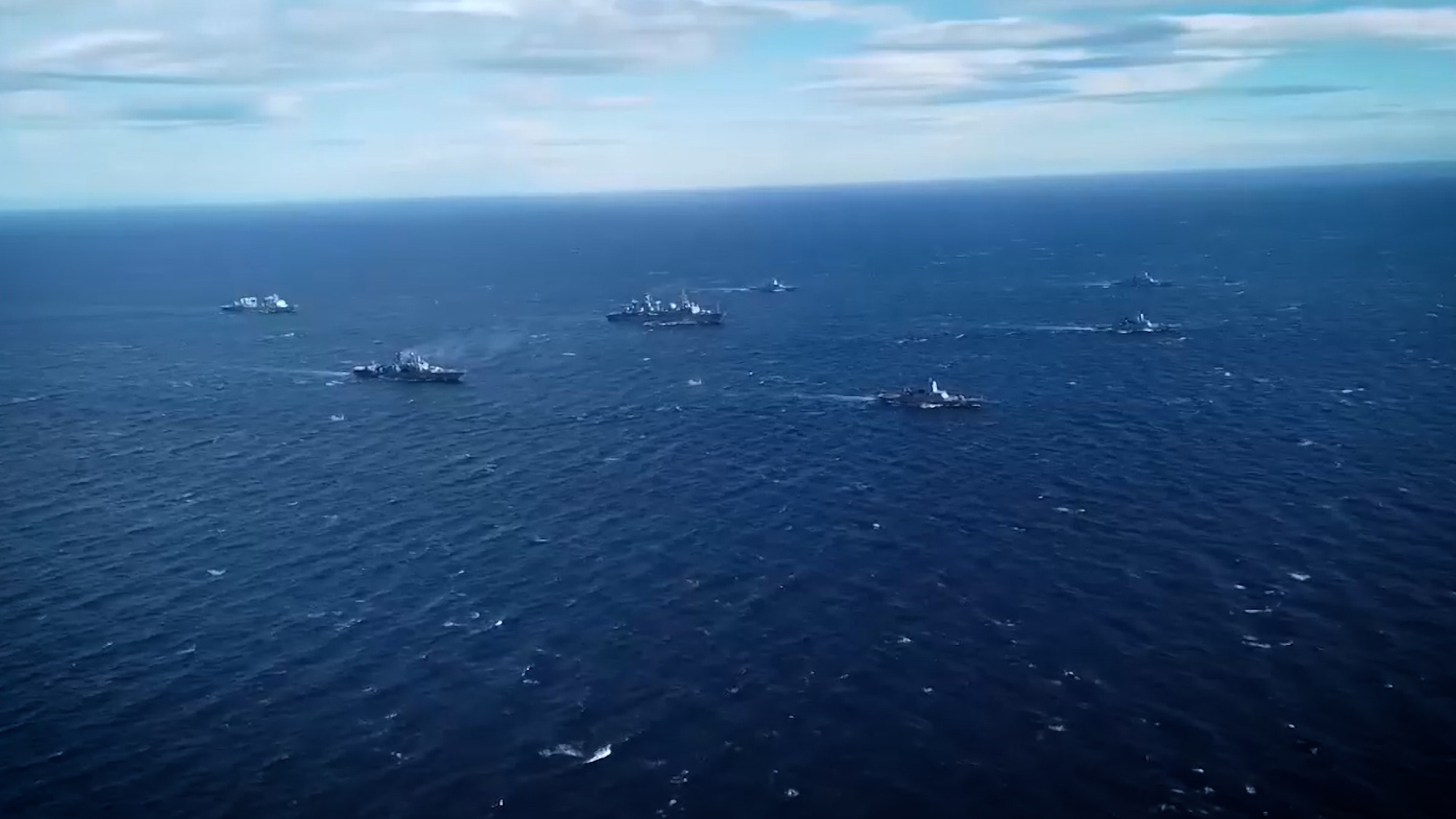 The warships of the Pacific Fleet and the Navy of the People's Liberation Army of China sail in the Sea of Japan, Russia, Friday, Sep. 2, 2022. They conducted artillery firing at surface targets as part of the Vostok-2022 strategic command and staff exercise.  (@mil/Zenger)

This footage reportedly shows Russian and Chinese navy warships taking part in wargames in the Sea of Japan and firing ordnance at targets.

The footage, obtained on Sunday, September 4, shows multiple naval vessels belonging to Russia and China taking part in the military exercises in the Sea of Japan. They can be seen opening fire at mock targets.

The images show Russian soldiers throwing a red and white buoy overboard which is then used as target practice.

Helicopters can be seen performing landing maneuvers and moving vessels, while other footage, obtained on Friday, September 2, apparently filmed from a helicopter, shows the fleet of Navy vessels in formation.

The images were obtained from the Russian Ministry of Defense (MoD) on Friday, September 2 and on Sunday, September 4, along with a statement saying: “The warships of the Pacific Fleet (Pacific Fleet) and the Navy of the People’s Liberation Army of China (PLA) conducted artillery firing at surface targets as part of the strategic command and staff exercise (SKSHU) Vostok-2022.

“According to the plan of the exercise, the Russian-Chinese detachment discovered a tactical group of ships of a mock enemy in the sea and entered into an artillery battle with them. To destroy surface targets, universal shipborne artillery mounts were used. The forces of the imaginary enemy were designated by a group of large landing ships of the Pacific Fleet, in fact, artillery fire was carried out at the naval target shield.”

There has been speculation that diplomatic relations between Russia and China are improving amid Russia’s ongoing war in Ukraine.

Russia invaded Ukraine on February 24 in what the Kremlin is still calling a “special military operation”. Monday marks the 194th day of the war.

Ukraine’s President, Volodymyr Zelensky, said on Sunday, September 4, that Ukraine had made progress in its counteroffensive against Russian forces, retaking two settlements in the south of the country and a third one in eastern Ukraine.

President Zelensky said: “The Ukrainian flags are returning to the places where they should be by right.”

Russian authorities said that the situation around the Zaporizhzhia nuclear power plant, which is Europe’s largest, was calm on Sunday, September 4.

This comes after UN inspectors from the International Atomic Energy Agency (IAEA) said on Saturday, September 3, that the Russian-occupied plant, in southern Ukraine, had lost external power again.

The IAEA said in a statement that the last remaining primary external power line had been cut off, although a reserve line is continuing to supply electricity to the grid.

President Zelensky has warned Europe to expect a difficult winter after Russia shut down a main pipeline that supplies Russian gas to the continent. He said: “Russia is preparing a decisive energy blow on all Europeans for this winter.”

Russian energy company Gazprom had said on Friday evening that it was shutting down the Nord Stream 1 gas pipeline to Germany indefinitely, after first halting the flow of gas for three days. Gazprom has blamed the move on “malfunctions”.

Ukraine’s Prime Minister Denys Shmyhal has thanked Germany for its solidarity in the face of the Russian invasion. But he added that Ukraine needs more weapons, including “modern combat tanks”.

Chancellor Olaf Scholz said on Sunday, September 4, that the German government had been planning for a complete halt in gas deliveries from Russia in December. He has promised measures to lower prices, with Germany announcing a $64-billion package to tackle rising costs.