Divers can be seen jumping into the water in the operation that lasted seven hours and resulted in the animal being freed.
By Joseph Golder September 7, 2022
Facebook
Twitter
Linkedin
Email 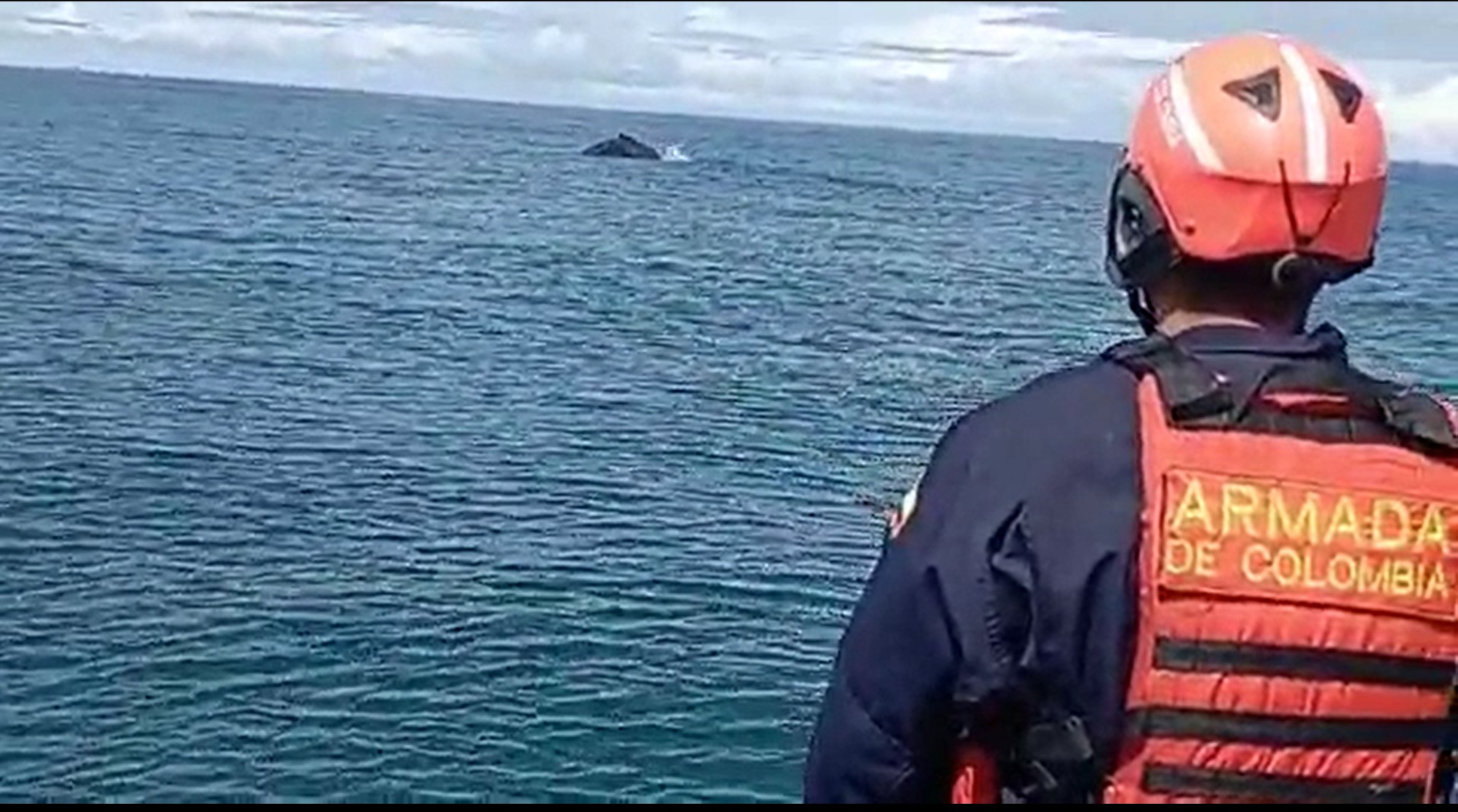 Picture shows Colombian Navy Coast Guard boats heading toward the trapped whale, in Bahia Solano, Colombia, undated. They manged to remove part of the net, and the animal swam away. (Armada de Colombia/Zenger)

This is the moment a baby humpback whale is freed after a seven-hour rescue operation when it got tangled in a discarded fishing net.

The images show the trapped baby humpback whale thrashing as it attempts to free itself from the fishing net. The images also show rescuers helping the whale. Divers can be seen jumping into the water in the operation that lasted seven hours and resulted in the animal being freed.

The Navy added: “In an inter-institutional effort between the Colombian Navy, the Ankla Azul Diving Center, the General Maritime Directorate, the Macuatico Colombia Foundation and the National Natural Parks of Colombia, they managed to free a calf that had been trapped in a fishing net in deep waters.”

They said that the incident took place near Bahia Solano, which is a municipality and town in the Choco department in western Colombia.

The Navy added: “Officials from the Utría National Natural Park were in charge of alerting the staff of the Bahia Solano Coast Guard Station about the presence of a calf whose fin was entangled in a trammel net, preventing its normal movement through the water.”

A trammel net is a three-walled net that is used to catch a wide variety of fish.

The Navy also said: “Immediately, a Rapid Reaction Unit of the Bahia Solano Coast Guard Station was deployed, which was carrying out maritime patrol and control tasks in the sector where the cetacean was spotted, with the purpose of providing accompaniment and carrying out maritime controls to stop boats that could affect the mammal from approaching.

“Likewise, a Naval Unit was arranged to transfer a team of divers to the sector from the Ankla company together with officials from the National Aquaculture and Fisheries Authority–Aunap, and staff from the Harbor Master of Bahia Solano, Codechoco, the Macuatico Foundation and National Natural Parks of Colombia to start the work of releasing the whale and saving its life.”

The Navy explained that the rescue team managed to remove the fishing net and that once freed, it swam away. The Navy said: “Once the protocols were verified, a large part of the trammel net was removed from the animal’s fin, allowing it to regain mobility and submerge out of sight of the diving staff.”

The Colombian Navy vowed to continue to protect “life at sea in all its forms”.

«Previous Post
Long-Lost Bros Separated As Kids In 1945 To Be Reunited For 1st Time»Next Post
Vaping Has Become A Gateway To Nicotine Addiction For Teens, New Study Finds